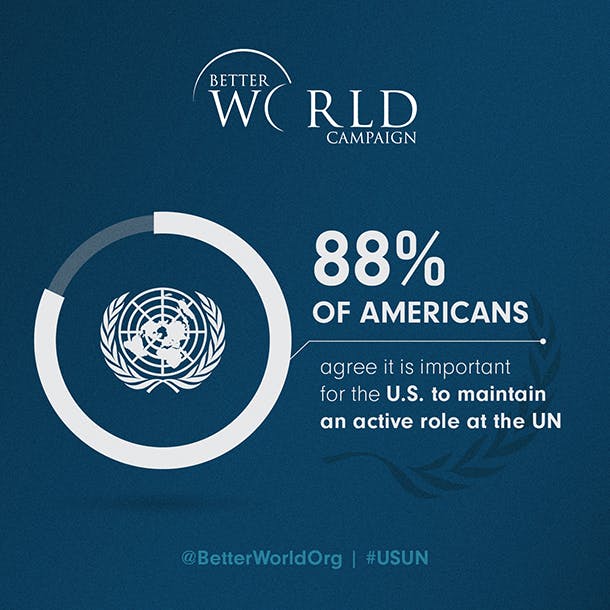 After a contentious national election, a new poll conducted by a bipartisan research team and released today by the Better World Campaign finds that registered voters remain unified in support of international cooperation and diplomacy as key tools of U.S. foreign policy –especially at the United Nations.

The poll shows that 88% of Americans support active engagement at the UN. The vast majority – 81% – also support the U.S. working with major allies to solve global challenges rather than acting alone.

The nationwide poll of 800 registered voters was conducted December 7-12 by the bipartisan research team of Public Opinion Strategies and Hart Research Associates with a margin of error of ± 3.46 percent. Respondents were equally split between Republican and Democrat voters and those who supported Donald J. Trump and Hillary Clinton for president.

Respondents agreed that – after terrorism – hostile nations, international trade, and conflicts in Syria and Iraq are the most pressing international issues for the incoming Trump Administration.

These results show that Americans recognize that the UN remains vital to developing global support for the nation’s priorities, including combatting terrorism, handling threats to international peace and security, and ending conflicts. Without active participation at the UN, including full funding, our nation’s ability to achieve our foreign policy and national security objectives would be severely diminished.

The UN also benefits the American economy. Over $500 million in UN contracts flow to American companies each year, and according to a newly-released report by the City of New York, hosting the UN in New York City has a positive economic impact equivalent to hosting seven Super Bowls each year.

And it’s clearly not just the U.S. that benefits from the UN. The UN is indispensable to tackling global challenges. About 40% of the world’s children receive their vaccinations from the UN, some 80 million individuals in 80 countries receive food and assistance from the UN, and approximately 60 million refugees and other displaced people are helped by the UN.