Pope Francis is a man of many firsts: The first pope from Latin America – or for that matter, from the Global South. The first Jesuit pope. And since this morning, Francis is the first pope to release an encyclical specifically focused on the environment and climate change.

While previous popes have spoken about the importance of caring for creation, through his encyclical, “Laudato Si’ (Praised Be You), On Care for Our Common Home,” Pope Francis has elevated environmental issues – and particularly the climate crisis – to a new level.

Speaking to more than 1 billion Catholics around the world, Pope Francis is a powerful and influential voice. So when the Pope states that humans are causing climate change and argues that we have a “moral imperative” to address it, as he did in today’s encyclical, the world takes notice.

We’re seeing new leaders step up on climate change, and leverage their audiences to draw attention to the urgent need for climate action. Earlier this week, the Dalai Lama used Twitter to reach his audiences on climate, tweeting, “Since climate change and the global economy now affect us all, we have to develop a sense of the oneness of humanity.” Influencers of all kinds – from celebrities like Leonardo DiCaprio and Mark Ruffalo, to thought leaders like Al Gore, to religious leaders like the pope and the Dalai Lama – are recognizing that climate change engages politics, religion, and beliefs. This is about livelihoods and lives, and we have a responsibility to rally behind climate change action.

At a climate conference at the Vatican in April, United Nations Secretary-General Ban Ki-moon, a strong advocate for climate action, stated:

“We have a profound responsibility to protect the fragile web of life on this Earth, and to this generation and those that will follow. That is why it is so important that the world’s faith groups are clear on this issue – and in harmony with science. Science and religion are not at odds on climate change.  Indeed, they are fully aligned.”

In dedicating his papal encyclical to the issue of environment and climate change, Pope Francis joins other leaders who recognize that we all need to step forward, whatever our sphere of influence, to create a collective global voice for action.

Francis was the first pope to focus an encyclical on tackling the climate crisis and environmental degradation. Perhaps, if world leaders hear this call, and respond with a determination to act decisively at the UN climate conference in Paris this December, Francis can also be the last pope who has to urge it.

Read the UN Foundation board statement on today’s historic release

Add your support to Pope Francis’s bold statements on climate change by sharing this image on Twitter! 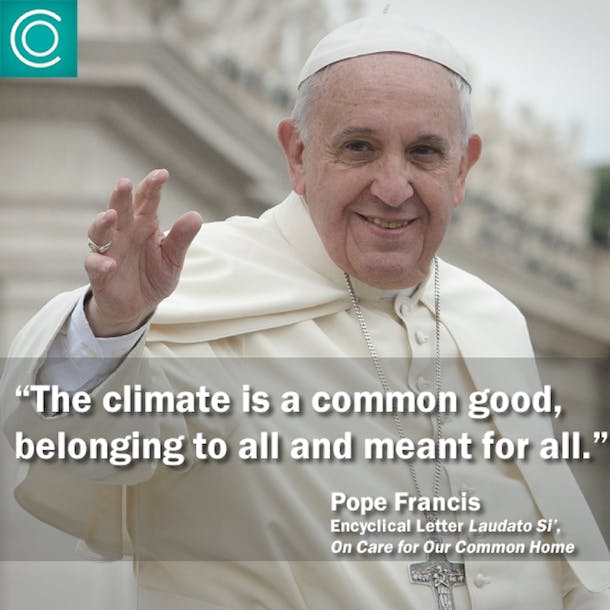 Tweet this: With his #encyclical #LaudatoSi, Pope Francis inspires a new generation of leaders on climate: http://bit.ly/1eqpti5 pic.twitter.com/tjfbhKyOHu