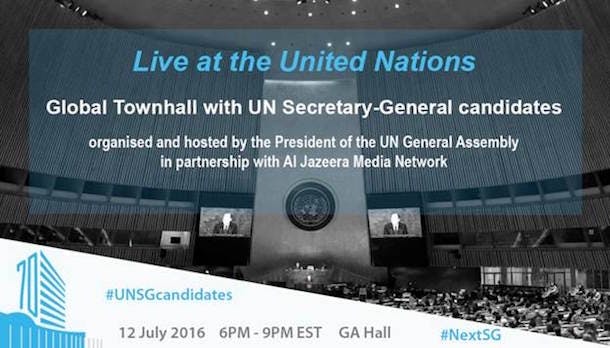 Editor’s Note: Miss the town hall with candidates for next UN Secretary-General? You can watch it on YouTube here.

As election season heats up in the United States, another important race is also happening: the selection of a new United Nations Secretary-General to take helm on January 1, 2017, following the end of Ban Ki-moon’s second term.

On Tuesday, July 12, the President of the United Nations General Assembly, in partnership with Al Jazeera Media Network, is hosting a town hall with candidates for the position of UN Secretary-General.

The event will take place from 6 p.m. – 9 p.m. EST and will be broadcast live by Al Jazeera Media Network, as well as streamed live on UN Web TV at webtv.un.org. You can also join the conversation online using the hashtags #UNSGcandidates and #NextSG.

The President of the General Assembly, Mogens Lykketoft of Denmark, has a useful website at un.org/pga/70/sg/ with information on the declared candidates for Secretary-General and how the selection process works. He has taken new steps, such as this town hall and informal dialogues with the candidates, to foster more openness and transparency in the process to select a new Secretary-General.

As the world confronts complex global problems from climate change to pandemics to humanitarian crises, the selection of the next Secretary-General is one of the most consequential in a generation.

The UN is the global body with the reach and vision capable of advancing solutions to the issues that matter to our world. We need a robust, effective UN to promote international partnership and to address current and emerging challenges – and strong leadership from the UN’s top diplomat will be essential.

The United Nations belongs to all of us, and we hope you will tune in to learn more.