Milestone at the UN: Gender Parity in the UN’s Leadership

Milestone at the UN: Gender Parity in the UN’s Leadership 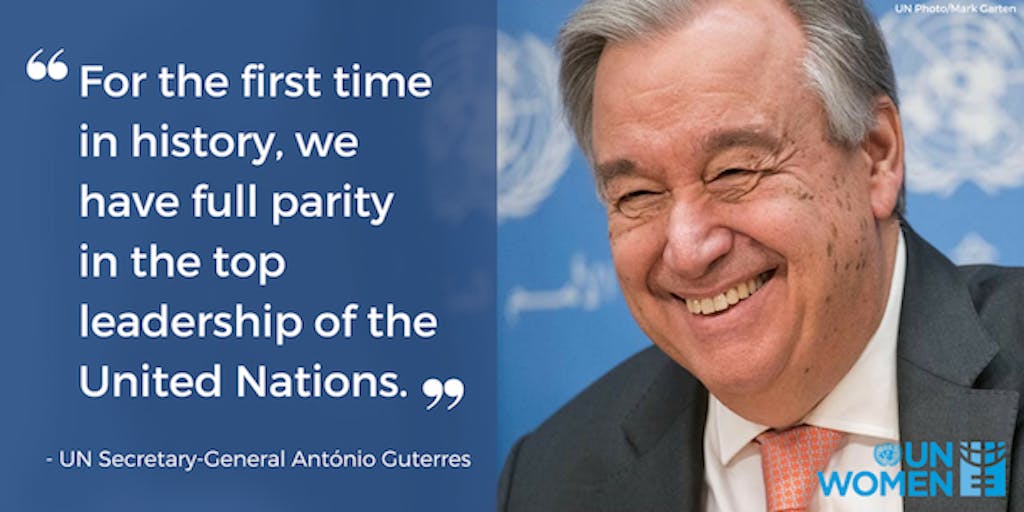 Last January, Secretary-General António Guterres took the helm of the United Nations and pledged to, “reach gender parity sooner rather than later,” adding he would “respect gender parity from the start.”

One year later, Secretary-General Guterres has delivered on his promise and made UN history. For the first time ever, the senior leadership of the organization is 50% female.

The Secretary-General’s Senior Management Group, a high-level leadership body charged with advancing the work of the UN, much like a “cabinet,” is now comprised of 23 women and 21 men.

UN leaders in the Secretary-General’s office and at UN Women acknowledge that work remains to ensure the equal and active participation of women at all levels of the UN system. Still, Secretary Guterres’ commitment to the ideals and benefits of gender parity, and his swift action on appointments, is truly welcome and encouraging.

To put this development into perspective, gender parity in leadership positions across business, politics, and other sectors is a glass ceiling that has yet to be shattered. For example, women make up only 6.4% of CEOs on the 2017 Fortune 500 list, and that figure reflects an increase of 50% from the previous year. In the 115th U.S. Congress, only 106 of the total 535 seats are held by women, an abysmal 19.8%.

Meet the 23 women who are making UN history:

At the same time, the Secretary-General and his team continue to champion gender equality on a global scale and in accordance with the UN Charter and the Universal Declaration of Human Rights. Secretary-General Guterres has rightly identified “the greater equality and inclusion of women,” as a “fundamental tool” to address complex challenges and advance peace, prosperity, and human dignity for all.

Sustainable Development Goal (SDG) 5, aimed at achieving gender equality and empowering all women and girls, is at the heart of UN efforts on gender equality. Consider the Spotlight Initiative, the SDG Flagship Fund established by the European Union and the UN, that is dedicated to advancing efforts to eliminate violence against women through collaborative and comprehensive delivery. This multi-year partnership will bring focused attention to all forms of violence against women and girls, and specifically trafficking, sexual exploitation, labor exploitation, domestic and family violence, sexual and gender-based violence, and femicide.

Within the UN system, the Secretary-General has created a task force on sexual harassment and appointed a Victims’ Rights Advocate to support survivors of sexual exploitation and abuse, among other measures.

From promoting girls’ education to defending women’s health to elevating women’s economic inclusion and empowerment and bringing women into peace processes, the UN continues to partner with civil society and governments to uphold the rights of girls and women and honor their needs.

Leadership by women, with women, and for women is key to the prioritization and efficacy of these investments. Thus, we applaud Secretary Guterres’ commitment to gender parity on his leadership team, and the team’s commitment to improve the role, status, and lives of girls and women everywhere.