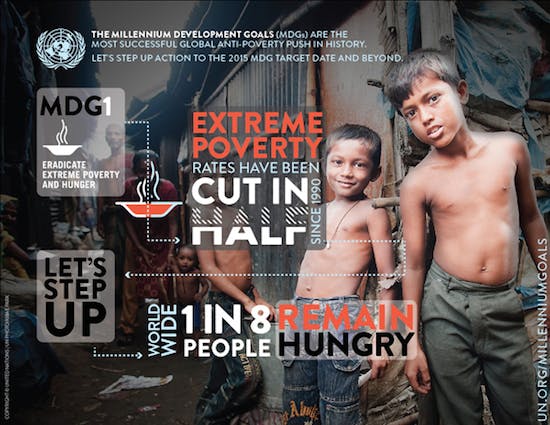 Every Monday over the next few weeks, we’ll be highlighting the Millennium Development Goals (MDGs) – eight goals established in 2000 by world leaders gathered at the United Nations.

These goals form the world’s “to-do list” to give millions of vulnerable people the opportunity to stay healthy, get an education, and build a better life for their families.

This week we’re kicking off by highlighting MDG 1. Here is what you need to know:

Target 1.B: Achieve full and productive employment and decent work for all, including women and young people.

But we have more work to do: 1.2 billion people still live on less than $1.25 per day and 1 in 8 people today remain hungry.

This is unacceptable. Join us in supporting the UN in building #MDGmomentum.