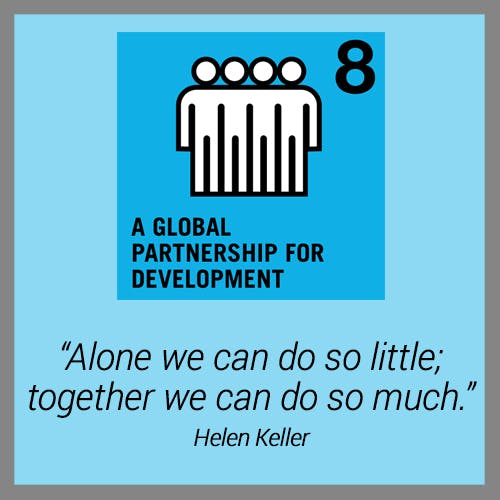 Today, we wrap up our MDG Monday series with a look at Millennium Development Goal 8, which aims to promote cooperation among countries and among sectors to advance development.
Here are the targets it sets:

Target 8.B: Address the special needs of least developed countries.

On a broader scale, innovative partnerships are helping address some of the toughest global challenges. For example, the UN Secretary-General’s Every Woman Every Child movement has mobilized hundreds of partners – from governments to businesses to non-governmental groups – to improve the health of women and children. Working under a common framework, partners bring their respective strengths to the table, committing resources, expertise, policy changes, and other actions.

Cooperation and collaboration will be critical to continued progress over the next 507 days until the target date for the MDGs.

Join the UN Foundation in supporting the UN’s work to advance the MDGs and build a better world. Follow us on Twitter at: @unfoundation and on Facebook at facebook.com/unitednationsfoundation.