This week, we’re continuing our “MDG Mondays” series on the blog. The Millennium Development Goals (MDGs) provide a global blueprint for the international community to focus its efforts to improve lives. As we approach the December 31, 2015 target date for the goals, we’re reflecting on the strides we’ve made and what still needs to be done. 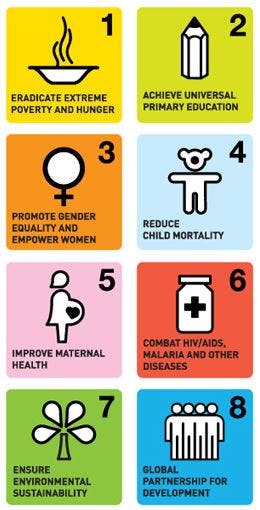 This week, we’re highlighting goals 2 and 3, which target education and gender equity, respectively.

According to the UN, many challenges remain. For example, women are more likely to work in vulnerable or undervalued jobs, violence against women continues to undermine the efforts to reach all of the MDGs, and poverty stands in the way of secondary education for many, especially adolescent girls. Worldwide, 781 million adults and 126 youths still lack basic literacy, over 60% of whom are women.

Yet, as we’ve seen in many communities around the world, progress is happening. As we look to the next 500 days and beyond, one of the best investments we can make is educating girls. This has a positive ripple effect: Educated and empowered girls can earn higher incomes, have healthier families, and help break the cycle of poverty.

Visit our Girl Up campaign to learn more about supporting the UN’s work to empower girls. As education advocate and inspiration teen Malala Yousafzai recently wrote, “The road to education, peace and equality is long, but we will succeed if we walk it together.”