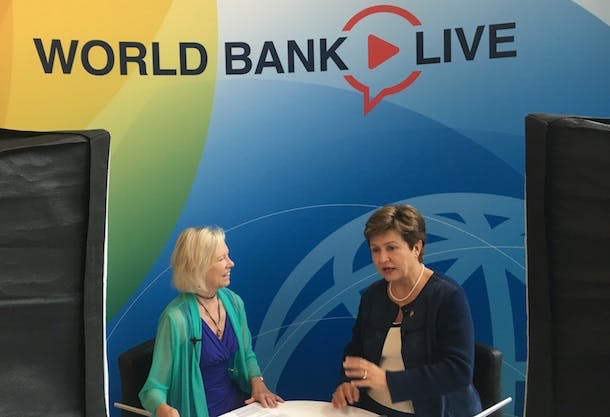 Twice each year – in both the fall and the spring – thousands of global development practitioners from government, the private sector, civil society, and academia descend upon Washington, D.C. for the World Bank/IMF Meetings. In addition to serving as an important forum to discuss critical issues – such as the world economic outlook, poverty eradication, economic development, aid effectiveness, and the role of multilateralism – the meetings also provide an important opportunity to launch new commitments, continue the momentum raised on key issues discussed during other key global convenings – including the United Nations General Assembly, and serve as a signal for the issues and priorities that the World Bank, IMF, and broader global development community, including the UN, will concentrate on over the coming year.

October’s fall meetings were no exception. The first of World Bank President Jim Yong Kim’s second term, and the first for the new U.S. Administration, the fall meetings highlighted the positive strides made to the global economy over the last year and laid out the increasingly inter-connected challenges facing global progress, including the rise in protectionism and isolation, conflicts, pandemics, climate change, and famine. Speaking on the importance of working together to end poverty and boost shared prosperity, President Kim outlined the importance of building resiliencies and making smart investments to ensure human solidarity, reaffirming the ideals that the World Bank and IMF were founded on, that “what affects one city, one country, one region can have immediate and lasting impacts on us all.”

The UN Foundation partnered with the World Bank on a Facebook Live series throughout the week to amplify these priorities and explore key themes of building resilience in communities, investing in human capital, and leveraging public-private partnerships. These themes were also reflected in various sessions over the course of the meetings, including through the following key takeaways:

Human capital and investing in human beings was a central theme of the week with President Kim hosting a summit on the role that investments in health, education, and nutrition will play in preparing the world’s future workforce for an economy that is increasingly transformed by automation. The World Development Report 2018, Learning to Realize Education’s Promise, was discussed throughout the week to highlight the importance of improving learning outcomes for moral, economic, social, and political objectives, and the World Bank launched its Human Capital Project to spur increased investment in people through nutrition, universal health coverage, educations, skills and jobs development, youth, and the well-being of women and girls.

The World Bank and IMF recognize the importance of sustainable development to stabilizing economic markets, contributing to increased global prosperity, and ending extreme poverty. Throughout the week, the Sustainable Development Goals were a key topic of conversation and were cited consistently as an important framework and tool to shift the focus of the conversation from awareness to collective action. A major focus of the conversation revolved around the important role of technology and data in driving sustainable development, including financial technology, big data, new platforms like blockchain, and the impact that new technologies and jobs may have on development outcomes.

Building on the UN Secretary-General’s announcement during last month’s UN General Assembly that he will host a Financing Summit next year, the importance of leveraging capital in order to mobilize the trillions needed to move people from poverty to prosperity was high on the agenda. Conversations focused on several new financial instruments and mechanisms designed to catalyze growth and accelerate progress on critical development needs. These included Blue Bonds to support development of marine resources and seafood value chains, the Global Concessional Financing Facility to support refugee populations and host communities, the Global Financing Facility to support maternal and child health, Green Bonds to finance renewable energy and climate-related projects, and Pandemic Bonds that can automatically release funds to poor countries during an epidemic.

Building on a key theme outlined during President Kim’s opening remarks on the need to build resiliencies, climate change was an important topic explored throughout the week. Conversations centered on climate-related investments, adapting to and responding to natural disasters, disaster response to recent hurricanes in the Caribbean, and the importance of resilient infrastructure. As the largest funder of climate-related investments in the developing world, the World Bank reiterated its intention of putting nearly 30% of its funding into climate-related projects by 2020, and President Kim announced that the Bank will begin reporting aggregate greenhouse gas emissions moving forward.

One of the most visible sessions of the week took place on Saturday with the official launch of the Women Entrepreneurs Finance Initiative (We-Fi), aimed at providing over $350 million in grant funding and mobilizing more than $1 billion in funding from international financial institutions and commercial financing sources to support women entrepreneurs. This effort aims to fill a $300 billion annual gap in access to credit to support the roughly 30% of small and medium-sized enterprises worldwide that are run and owned by women.

In its wrap-up communique document at the conclusion of the meetings, the IMF reiterated that, despite the many gains we’ve made in global progress over the years, “there is no room for complacency” as nations confront new challenges to global growth, including cyber-security attacks and more violent weather patterns linked to climate change. Indeed, it will take actors from every sector, industry, and stakeholder group to act with urgency on the collective we all face in order to achieve a more sustainable, peaceful, and prosperous world.

For more information on how you can help to be a part of the movement for global change, follow the UN Foundation.