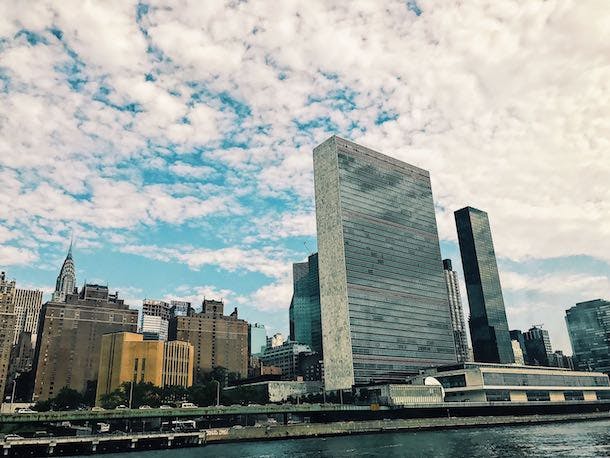 We are living in an era of ever-shifting complex challenges – from deep societal divisions to significant threats to peace and security to strains due to inequality and the effects of climate change across the globe, to name but a few.  That is why it’s essential that all of us –governments, people, corporations, and civil society groups – deepen understanding of what brings us together and how we can collectively advance peace, stability, and prosperity. During the week of September 17, world leaders will gather in New York for the high-level week of the 72nd session of the UN General Assembly – often called “UN General Assembly week” – to foster dialogue and action on the world’s most pressing challenges.

While the value of global engagement and the UN has come under recent heightened scrutiny, it’s increasingly clear that problems without borders require cooperation across borders – which is why the UN is an indispensable platform. During the UN General Assembly, the world will talk about how to address the issues that affect the security and dignity of all people, from rogue regimes to the refugee crisis to hunger and disease. It’s a week like no other, and one that could only happen at the UN – the sole organization that represents the people of the world, from countries big and small.

This year’s UN General Assembly will be one to watch, particularly as it will be the first for UN Secretary-General António Guterres and an opportunity to reinforce his vision for a strong, modernized UN that is focused on prevention and advancing peace. It will also be the first UN General Assembly for the new U.S. President, as well as many other new world leaders. (Tune in starting on Tuesday, September 19 for remarks from the Secretary-General and heads of state, including the U.S. President).

As we approach the week, here are key issues to watch. To get live updates from the UN General Assembly, follow the UN (@UN) and UN Foundation (@unfoundation) on Twitter.

UN Secretary-General António Guterres campaigned on a platform of building a strengthened UN that can respond to today’s challenges and what people around the world say they want from the UN, and has indeed made reform a top priority in his first year in office, focusing on the UN’s peace and security architecture; the development system; and internal management. He has also taken concrete steps to stamp out sexual exploitation and abuse by peacekeepers and others in UN missions, such as appointing an advocate for victims’ rights.

On Monday, September 18, he will host a high-level meeting to discuss efforts to strengthen prevention and response, including a voluntary compact between the UN and Members States to stop violations. The U.S. government is also expected to hold an event on September 18 to discuss UN reform.

Striving for a more peaceful and secure world is a cornerstone of the UN’s work. During UN General Assembly week, we expect world leaders to discuss a range of issues dominating global headlines, including the nuclear and ballistic missile activities of North Korea; the Iran nuclear deal; counter-terrorism and violent extremism; and ongoing conflicts like Syria and Yemen. Additionally, on September 20, the UN Security Council is holding a high-level discussion on UN peacekeeping.

Humanitarian Response to the Four Famines and Other Crises

Over 20 million people in South Sudan, Yemen, Somalia, and Nigeria are threatened by looming famine. And while UN agencies and humanitarian partners are responding to these crises, more funding and access is needed to urgently deliver aid. During the week, the UN and partners are expected to meet to assess progress on famine response and prevention following a meeting in April during the World Bank/IMF spring meetings.

Additionally, governments and other partners are expected to discuss how to alleviate human suffering in humanitarian emergencies around the world, such as Syria and Iraq, where UN agencies and other humanitarian partners are on the front lines of helping families in crisis as they face violence, disaster, and displacement.

Action on the Sustainable Development Goals and Climate Change

In the midst of these crises and immense challenges, the UN General Assembly will also be an opportunity to assess and accelerate progress on the Sustainable Development Goals (SDGs) and the Paris Agreement on climate change – blueprints for a thriving planet where all people live with dignity, and, in the words of Secretary-General Guterres, the ultimate strategy for prevention of conflict and instability.

In addition to high-level events on financing the SDGs, gender equality, global education, universal health coverage, and data for sustainable development, there will be several high-profile events under the banner of Global Goals Week, which will bring together partners to continue momentum and cultivate ideas, solutions, and partnerships that are measuring progress, driving action on, and promoting accountability for the implementation of the SDGs. Notable events demonstrating the range of partners contributing to Global Goals Week include: the World Economic Forum Sustainable Development Impact Summit, the Bloomberg Global Business Forum, Goalkeepers, We The Future, the Social Good Summit, the UN Global Compact Leaders Summit, and the Global Citizen Festival.=

The Fight Against Human Trafficking

Human trafficking is a human rights violation that endangers people around the world. On Wednesday, September 27, and Thursday, September 28, the General Assembly will hold a high-level meeting to assess progress and challenges in implementing the UN Global Plan of Action to Combat Trafficking in Persons.

All of these issues will require cooperation and action across borders and sectors, which is why the UN’s convening power is vital to progress in the 21st century. Follow the UN and UN Foundation for the latest news and for ways to get involved.