Journalists at the Front Lines of Sustainable Development Reporting

Journalists at the Front Lines of Sustainable Development Reporting 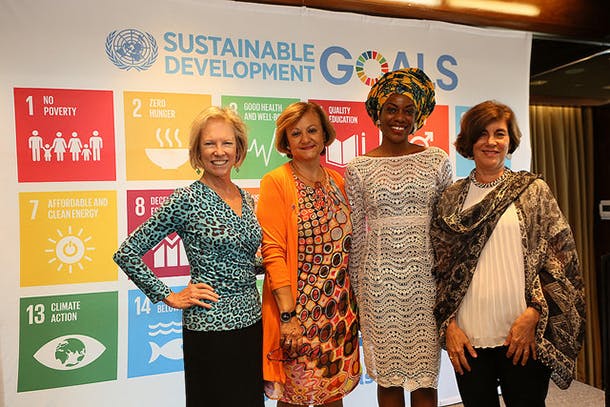 How do we turn the Sustainable Development Goals from aspirations on paper to achievements around the world? The answer is action.

We need people around the world taking action in their communities and holding their governments accountable for keeping the promises they made. But in order to have action, we need awareness. People must know about the global goals before they can embrace them as their own.

Journalists are on the front lines of raising awareness of the Sustainable Development Goals and global challenges. They perform a vital civic duty by shining light on the issues that matter to us all. That’s why the UN Foundation works to build capacity for journalists to report on sustainable development issues and to recognize their important work.

Last month, the UN Foundation and the International Center for Journalists (ICFJ) held a discussion on journalism and the Sustainable Development Goals and recognized journalist Chika Oduah with ICFJ’s inaugural “Young Reporter for a Sustainable Future Award.”

Oduah, who lives in Nigeria, has reported for both Nigerian and international news outlets including CNN, Al Jazeera English, The Guardian, and Bella Naija. She stands out for her reporting on the kidnapping of the Chibok girls, environmental abuses, poverty, human trafficking, and other important issues. My colleague Claire Baumann spoke to Oduah last month, and here is their conversation.

I say that number one, it’s great for journalists to find out how local communities are connected with wherever you are covering, whether it’s Lima, whether it’s Guatemala, or whether it’s South Africa, and if relating that back to American communities, try to find some links

I would say also try to talk to people in both communities, so it sounds like a conversation. … For example, if you are doing a story about water pollution in Ghana, and you are trying to write for a newspaper in Texas, try to talk to the Ghanian community in Texas. I think diaspora communities are a great way to link stories to local communities, and of course you can find that all around the United States.

I also think it is important for journalists to find a niche topic. So, for example, if we are talking, again, about a community in Atlanta, and if they are focusing on something perhaps related to education to see if they have any educational programs. A lot of cities in America do have educational programs all around the world. So, number one, look for a diaspora community. Number two, look for a niche topic that would interest the people in the local community.

Is there a person or story that stays with you that you have written or encountered?

I was doing stories on domestic violence in Nigeria, and I encountered a 70-year-old woman who was getting beaten by her husband. She was getting abused for many years for reasons why she didn’t know, but her husband was very violent toward her. I stayed in touch with this woman. Next thing I learned she had been killed by her husband and buried in the backyard. … So I was trying to do a follow-up story on what’s happened with litigation. A human rights lawyer was trying to come in to and get the case on trial, but that fell through.

So cases like that really shine the light on the lives that many women in Nigeria do live, not just Nigeria, but all around the world, in India and in other parts of Asia. … A lot of those women don’t have voices at all, and so whenever I am doing a female story I think about her. … So I am hoping we focus on more stories that focus on domestic violence so women like that don’t have to go to the grave with their stories.

What was it like traveling to be one of the first reporters to see the Chibok girls?

I felt no one had really gone to Chibok. We were hearing a lot of reporting on Chibok from Lagos, Washington D.C., and from South Africa. … So why hasn’t anyone gone to Chibok. So I said, hey, why don’t I just get up and go? …

A lot of twists and turns on that journey…but the best thing about being there was how I was embraced with open arms because many of the people living in Chibok had not seen journalists, and they were wondering if the world forgot about them.

So, for them to see a journalist, they were very appreciative, and to this day I am very good friends with the people of Chibok. Establishing…and maintaining contacts is so crucial for journalists to do follow up stories because follow-up is very important.

What’s the next story that you are working on? What do we have to look forward to?

I really want to do cultural reporting, because Boko Haram has of course taken the narrative from Nigeria. When you think of Nigeria, you think of oil and Boko Haram, but I want to do something else…to show that we have good things in different parts of Africa. So, cultural stories would be the next wave for me.

What have you learned about sustainable development through reporting?

I’ve learned that there is a huge disconnect between the international community and local residents in different parts of Africa. Many of them do not feel that these issues are that important. They don’t think things like water and sanitation are that important, education,  because right now they are just trying to get food. So, sometimes it is difficult to talk to, perhaps, a politician in Kenya about sustainable goals when he’s thinking our major concern right now is not this, especially climate change. People just don’t see that as a pressing issue in Africa much.

So I’ve learned that we have to show the immediate impact, and say, “You know what, climate change is actually inspiring violence.” It’s instigating violence especially in different parts of West Africa as we’re seeing herdsman go to farmlands to herd for their cattle and sheep because in the north where they live, the grass is dying. It is getting hotter. So we’re seeing environmental changes there. The Sahara Desert is expanding across West Africa and that’s really having different impact, different ramifications across West Africa, so we have to find a way to make lawmakers and policymakers across Africa to understand that these issues are crucial. And not just policymakers, but grassroots people; for example, the woman cooking food on the street and the teacher in the primary school, we have to say these issues are vital and they are affecting your everyday lives, not just 20 years from now.

What’s the favorite part of your job?

Meeting people! Meeting people is great because you can really hear different views and assimilate everything together, and it gives you a wider view of what’s happening. It gives you a deeper truth. I think it’s very important to look for the deeper truths, not just superficial truths, and you get that by hearing as many voices as possible.

So my stories usually have a lot of voices. I don’t like simplified stories; it really is complex because people have their voices, and it’s very crucial to put them all in there, even if it means talking to 20 people. … Nothing is simple, it has to be complex.