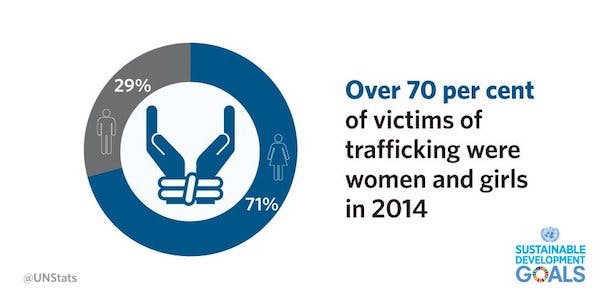 Sunday, July 30, marks the fourth annual World Day Against Trafficking in Persons to “raise awareness of the situation of victims of human trafficking and for the promotion and protection of their rights.”

Human trafficking transcends borders; therefore, the international community must act to help the tens of millions of victims of modern slavery, forced labor, trafficking, and sexual exploitation around the world.

The United Nations explicitly mentions human trafficking in goals 5, 8, and 16 of the Sustainable Development Goals, and as the world recognizes the global importance of achieving the SDGs, it is imperative that efforts to end human trafficking remain a priority.

Women and children are disproportionately at risk to becoming trafficking victims. According to UNODC, children make up almost a third of victims worldwide.

The intersection between the world refugee crisis and the human trafficking system has become increasingly apparent as traffickers continue to exploit the vulnerability of people desperate for security and stability.

Last week, the International Organization for Migration (IMO) released a new report detailing the vulnerability of migrants to sexual exploitation in the Mediterranean region. IOM estimates that 80% of girls arriving from Nigeria risk becoming sex trafficking victims, and many have already been subject to violence and abuse prior to arriving at their destination.

“Trafficking is a transnational crime that devastates the lives of thousands of people and is the cause of untold suffering,” said Federico Soda, Director of the IOM Coordinating Office for the Mediterranean in a press release announcing the findings. “This is a theme we have been working on for years, committing to protect, prevent, and collaborate with the authorities dealing with organized crime.”

Despite ongoing efforts by the UN to address the data gaps in the research of human trafficking, most victims remain unidentified, posing a challenge for humanitarian response and protection efforts.

To donate to the UN Fund for Victims for Human Trafficking in Persons, click here.

Your financial contribution to the fund can provide a safe recovery space, appropriate health treatment, schooling and training, as well as legal support and advice for victims of trafficking.

You can also support the UN’s response by engaging with their Blue Heart Campaign, an effort to mobilize international action and show solidarity to victims of trafficking. UNODC encourages people to wear the blue heart symbol or use the hashtags #EndHumanTrafficking and #HumanTrafficking on social media.

Victims of trafficking often go unnoticed, you can help by recognizing the signs and identifying those in need of help.