A Humanitarian Crisis that Needs Your Attention: Cholera in Yemen

A Humanitarian Crisis that Needs Your Attention: Cholera in Yemen 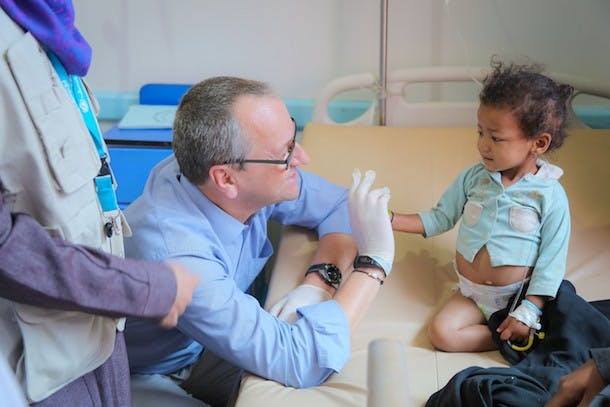 The civilian toll of the conflict in Yemen continues to grow. Years of the fighting have devastated the country’s health, water, and sanitation systems, contributing to what is now the worst cholera outbreak in the world.

Recently, UNICEF Executive Director Anthony Lake and World Health Organization Director-General Margaret Chan said, “This deadly cholera outbreak is the direct consequence of two years of heavy conflict. Collapsing health, water and sanitation systems have cut off 14.5 million people from regular access to clean water and sanitation, increasing the ability of the disease to spread. Rising rates of malnutrition have weakened children’s health and made them more vulnerable to disease. An estimated 30,000 dedicated local health workers who play the largest role in ending this outbreak have not been paid their salaries for nearly 10 months.

“We urge all authorities inside the country to pay these salaries and, above all, we call on all parties to end this devastating conflict.”

Before the outbreak, Yemen was already suffering. With millions of people displaced from their homes, over half of the population regularly struggles to find adequate food. Malnourishment only increases the danger of contracting cholera. And nearly 15 million lack access to safe drinking water and sanitation services.

The number of suspected cases has reached over 200,000, and is increasing at a rate of 5,000 a day, with 1,300 reported deaths. A quarter of those deaths are children. These are only verified cases, and actual numbers may be much higher.

Cholera is a water-borne disease, spread through contaminated water – a common occurrence in Yemen. It is a treatable disease, and rarely fatal in developed countries, where treatment consists of keeping the patient hydrated.

However, Yemen’s lack of drinkable water prevents effective treatment. Hospitals are struggling to accommodate the cases coming in at an increasing rate. Hardworking medical staff in Yemen’s 19 affected governorates haven’t been paid in nearly 10 months and have limited medical supplies.

Despite the challenges, humanitarian partners and United Nations agencies like UNICEF and WHO are pushing forward, setting up diarrhea treatment centers, oral rehydration points, and beds for cholera patients across the country. IV fluids, cholera kits, and water purification supplies have been airlifted into the country. The doctors, nurses, and other health workers there are being paid in part by UNICEF to prevent the complete collapse of the system.

In addition, UNICEF is working to spread information about the spread and prevention of cholera, going house to house as they deliver hygiene kits and chlorinate water sources. Nearly 3.5 million people have received clean, drinkable water and hygiene kits.

These efforts are helping people in crisis, but more is needed. According to the UN Office for the Coordination of Humanitarian Affairs, the Yemen Humanitarian Response Plan is just 30% funded. Humanitarian partners need more resources and unhindered access to bring in and deliver aid. And importantly, Yemen needs peace.

Your support can make a difference for vulnerable people in Yemen. Donate to the UN’s Humanitarian Fund in Yemen so partners can reach more people.