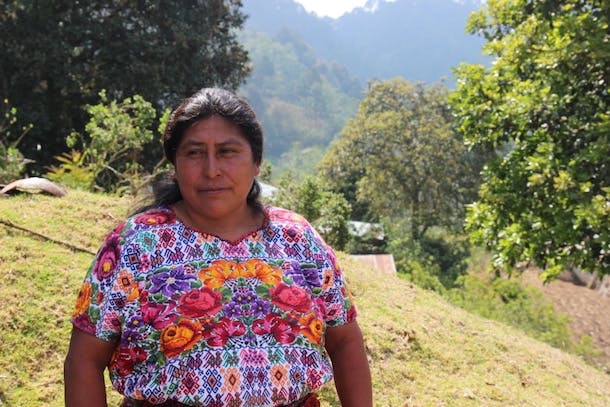 Progress on the Sustainable Development Goals is happening in many forms. It is not exclusively because of those who hold positions of power – it can come from anyone, anywhere, who takes even one step toward building a more sustainable future. I saw this first-hand in Guatemala, where I was proud to see the extraordinary work of individuals striving to improve life for their families, communities, and country.

Señora Antonia Batz is one of these individuals. Standing just over five feet tall, she has an air of confidence and strength that makes her a presence in any room. And she carries it well: Antonia leads a community of midwives in the San Carlos community outside of Tecpán, Guatemala, where she provides pre- and post-natal health care and ensures safe childbirth for local women who have little access to a health clinic.

“I have the gift of being a midwife,” said Antonia, who began her career more than 15 years ago after she saw the needs of women in her community and decided she wanted to “fight for indigenous women.”

But this is not an easy fight. About 43% of the population in Guatemala is indigenous, and girls and women who are indigenous face intense discrimination. These girls and women have the cards stacked against them from the very beginning: They are more likely to be married and pregnant at a young age and are more than twice as likely as non-indigenous women to die during childbirth. And for indigenous women who want to avoid or delay pregnancy, many are not using an effective form of contraception for a variety of reasons –  discrimination, poverty, geography, language barriers, lack of education, and religious and cultural expectations all play a role. In many rural areas of the country, a safe pregnancy and childbirth, let alone access to family planning, is just not a reality.

That’s where midwives like Antonia come in. Most Guatemalan women give birth at home, with midwives attending 60%-75% of all births (up to 90% in rural areas). But not all births at home are safe: take Louisa, one of Antonia’s patients. After having her first two children at home, Louisa felt something was wrong in her third pregnancy and sought counsel from Antonia. Antonia quickly found the baby was not positioned correctly for a safe home delivery and referred Louisa to a regional hospital where she had a caesarian-section and, as a result, a happy and healthy baby. Antonia helps support San Carlos women like Louisa before, during and after birth, from healthy eating and nutrition during pregnancy to a safe delivery and health services for the child. She also helps advise on family planning options.

“I always talk to women about [family planning],” she said. “It’s a decision each family has.”

Antonia’s expertise has made her well-respected in her community, but she faced incredible resistance from the start.

“This hasn’t been an easy job,” she noted, describing the threats, violence, and even attempted rape she encountered from men in the community when she began working as a midwife. Her work in educating and empowering women, Antonia said, became a threat to some men in her community as these women became more vocal and politically active to defend their health and rights. But other men realized the community-wide benefits of her services and stepped in with their support. Antonia persisted and now serves more than 50 women in her community.

“Society has made us believe that we are just housewives; Antonia transcended this and did more,” said Victoria Cumes Jochola, a coordinator with Nuestra Voz, a local organization which, with support from the UN Population Fund, works to improve the quality of life for women in rural Guatemala and works closely with Antonia in her community.

More than 300,000 women around the world die each year from preventable pregnancy-related complications – that’s about 800 women dying every single day from problems we know how to solve.

When women can plan their futures and time and space their pregnancies through access to effective contraception, they have healthier pregnancies and healthier babies. Family planning is also a powerful tool to combat poverty as it boosts the whole family’s educational and economic prospects. This is why ensuring universal access to sexual and reproductive healthcare and reproductive rights, including family planning, is a key target of two Sustainable Development Goals.

Individuals like Antonia are doing extraordinary work; but everyone has a role to play. In a country where complications during pregnancy and childbirth are a leading cause of death among women, Antonia makes us realize that we each have the power to make a difference.

This post is part of the “SDG Solutions” series hosted by the United Nations Foundation, Global Daily, and +SocialGood to raise awareness of ways the international community can advance, and is advancing, progress on the Sustainable Development Goals. As the international community prepares to gather at the UN for the High-Level Political Forum on Sustainable Development from July 10-19, this series will share ideas and examples of action. Previous posts in the series can be found here.