How A Refugee-Turned-Photographer in South Sudan Got His Start

How A Refugee-Turned-Photographer in South Sudan Got His Start

The South Sudanese native says he didn’t truly understand the power of the lens until he had the opportunity to learn from some of the world’s best photographers about how to tell the story of his country — South Sudan — and its people.

“I knew what a photo was, but I didn’t know that it can tell stories,” he recalls. “Photography is a universal language. If I take a picture of South Sudan through my lens, it will speak to you.”

This life-changing lesson came at a particularly difficult moment in his young nation’s history. In 2014, Bullen was living and studying in Juba, South Sudan’s capital. Only months before, the city had erupted in ethnic violence as the country’s president and vice president battled for power.

During this time, National Geographic announced a week-long workshop for young aspiring photographers in South Sudan. The concept behind these “Photo Camps” is a simple yet powerful one: To give communities that are too often overlooked, misunderstood, or disenfranchised the opportunity to tell their own stories. 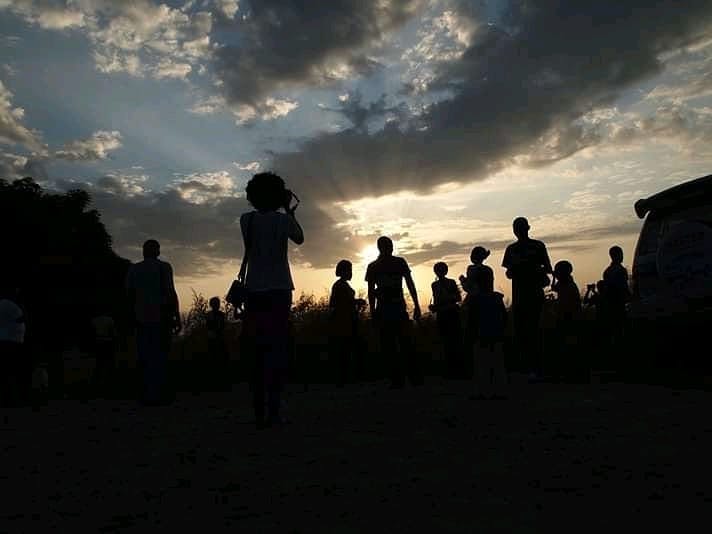 On the final day of the National Geographic Photo Camp in South Sudan,
Bullen captured this image of his fellow students struggling to capture the morning light.

The organizers chose South Sudan, in part, as an opportunity to bring members of the country’s diverse ethnic communities together. Bullen, who was earning a degree in communications at a local university at the time, decided to apply on a whim. He was selected as one of 20 men and women representing a cross-section of tribes.

He loved being able to depict a different South Sudan than the one being portrayed in headlines about the ongoing conflict.

“It is good to be a storyteller in your own home,” he says. “There is a lot of beautiful things that are not known outside the world about my country.”

Like, for instance, that South Sudan is home to 64 distinct tribes, each with its own history and traditions. Bullen believes this diversity is part of what makes his homeland so unique — and worth preserving in photos.

“I’m a son of this place and I need to know what is behind those beautiful cultures; what makes them come alive,” he says.

“When cultures fade, it cannot be reversed. That’s why I want to document it so that the coming generation can see the country their grandfathers and grandmothers knew.”

The idea of citizenship — of belonging, of safety, of home — means something more for Bullen, who spent his childhood as a refugee fleeing a civil war that consumed the region for more than two decades. Bullen fled the country as a young boy and returned after the country gained independence in 2011.

Three years later, meeting other young South Sudanese during the photography workshop who had been displaced as children — and now watching his new country descend yet again into conflict — brought back vivid and often painful memories.

In a journal entry from the camp, Bullen wrote:

“Flashing back across the moves I took across the valleys, deserts, rivers, and bushes, across the country with my parents over 21 years of civil war, [there] were animals feeding on human remains, the days were always growing dark and darker, and dreams were fading away every single moment.”

Yet despite the capital’s instability and the elevated security that followed, he was able to capture incredible moments through his newfound, albeit borrowed, lens. At one point, he found himself on a boat in the Nile near a group of children playing in the water. The scene captivated him: The sunlight bouncing off the river currents, the children splashing, the joy of that moment at a time of great uncertainty in South Sudan.

“I knew I just needed to get that picture,” he recalls. “And if I don’t go closer to them, I’ll not get it. So I just jumped from my boat into the water, and the children all started laughing.” 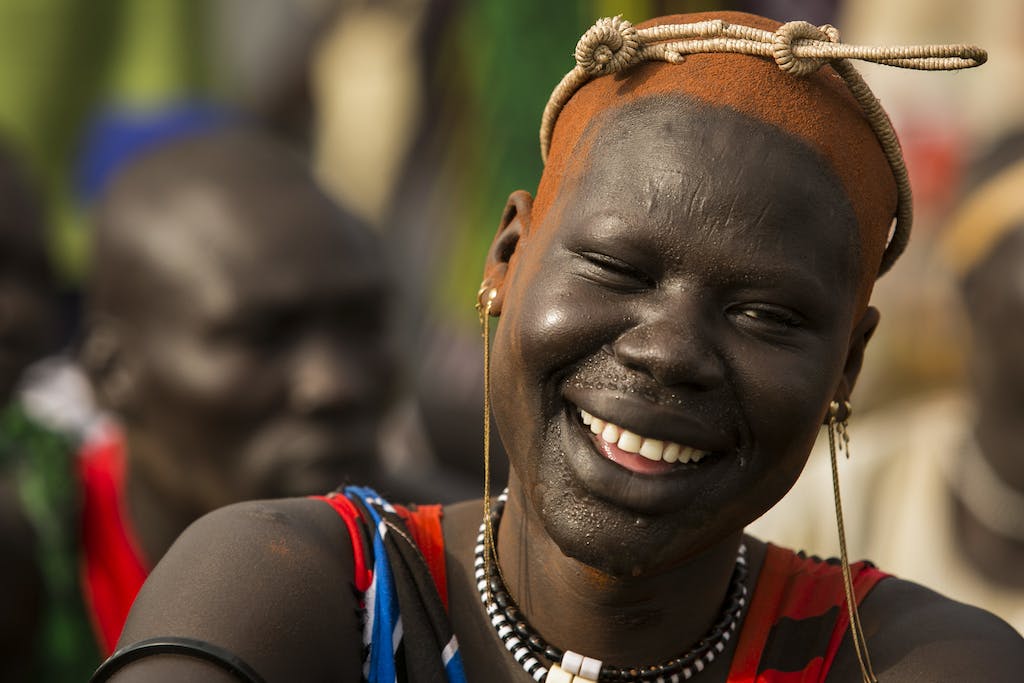 Portrait of a girl from the Mundari tribe of South Sudan during an inter-tribal wrestling match. (©Bullen Chol) 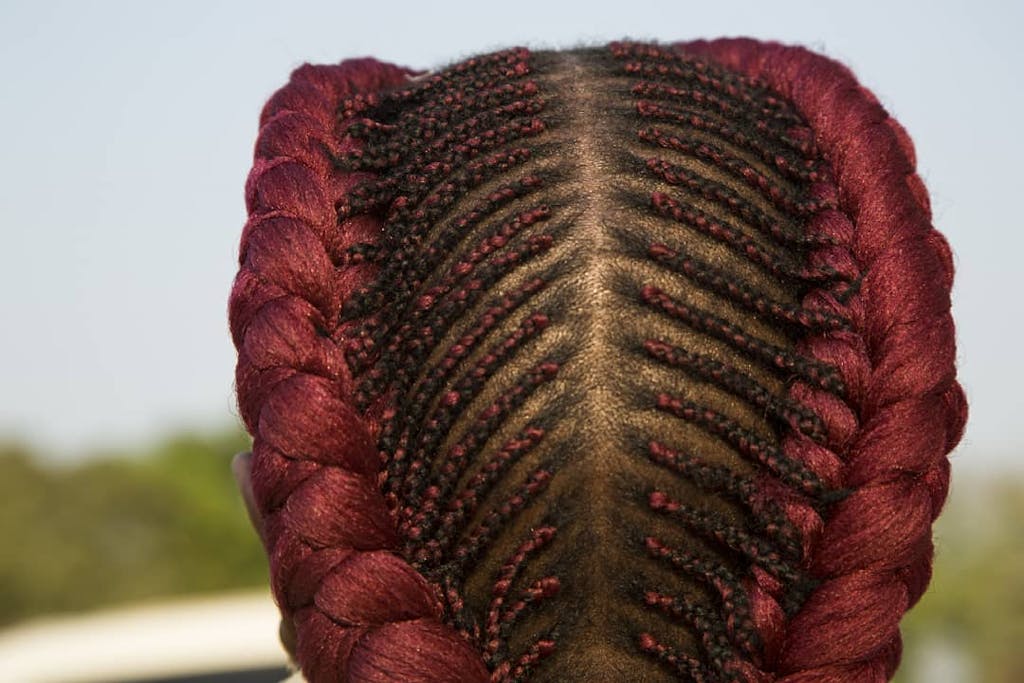 The braided hairstyle of a girl in South Sudan that Bullen describes as looking like a cobra's head. (©Bullen Chol)

The experience at National Geographic’s Photo Camp revealed a new passion — and natural skill — that he never knew he possessed. “I came to realize that when you like something you can be good at it,” Bullen says.

There was just one problem: He didn’t own a camera.

Instead, he purchased an inexpensive memory card and befriended photojournalists traveling through the region, asking if he could borrow their camera for an hour so he could snap his own photos.

His determination and resourcefulness eventually paid off. In 2016, the UN Educational, Scientific, and Cultural Organization (UNESCO) held a “Sports for Peace” competition, asking South Sudanese photographers to submit pictures illustrating how sports can foster peace and unity. Bullen decided to enter one of his favorite images — a photo of a group of men in wheelchairs playing basketball together. 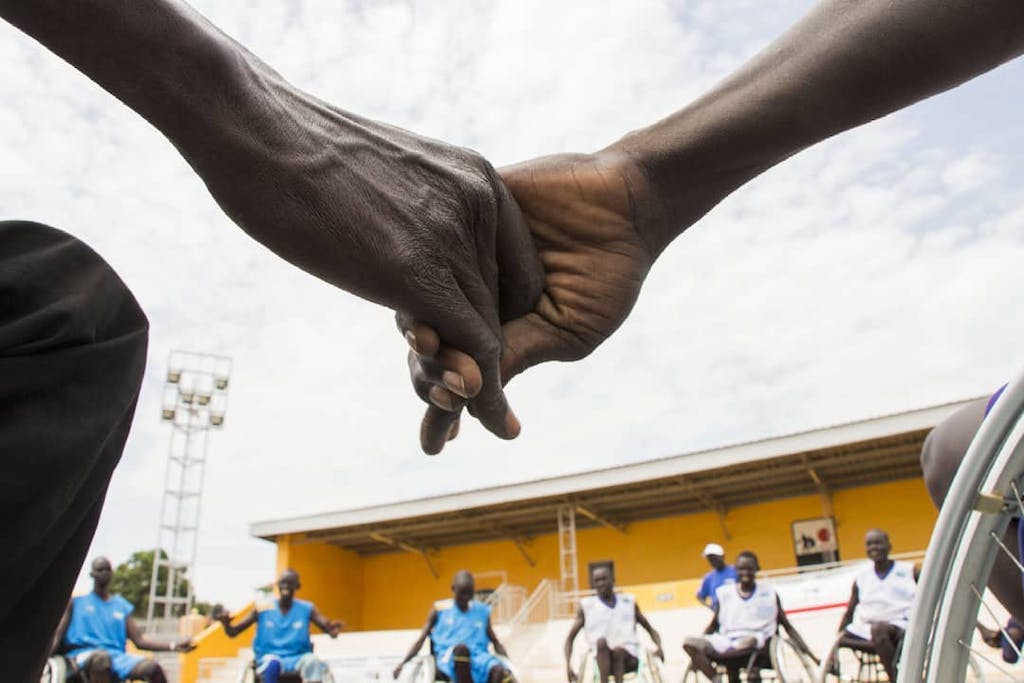 UNESCO held its event at a stadium in Juba. Bullen attended with a friend when he heard his name announced over the loudspeaker as the winner of the photography competition. The award he received: His very own camera.

“I just thanked God,” he recalled. “That is how I started. That camera became my roadmap.”

Since then, Bullen has worked as a freelance photographer for Reuters, the Associated Press, and humanitarian agencies operating in South Sudan, including UNICEF.

Last year, he worked with UN staffers from the World Food Programme (WFP) on the agency’s own Storytellers project. Like National Geographic’s Photo Camps, Storytellers seeks to empower vulnerable and at-risk communities with skills and tools to share their unique perspectives with the world. 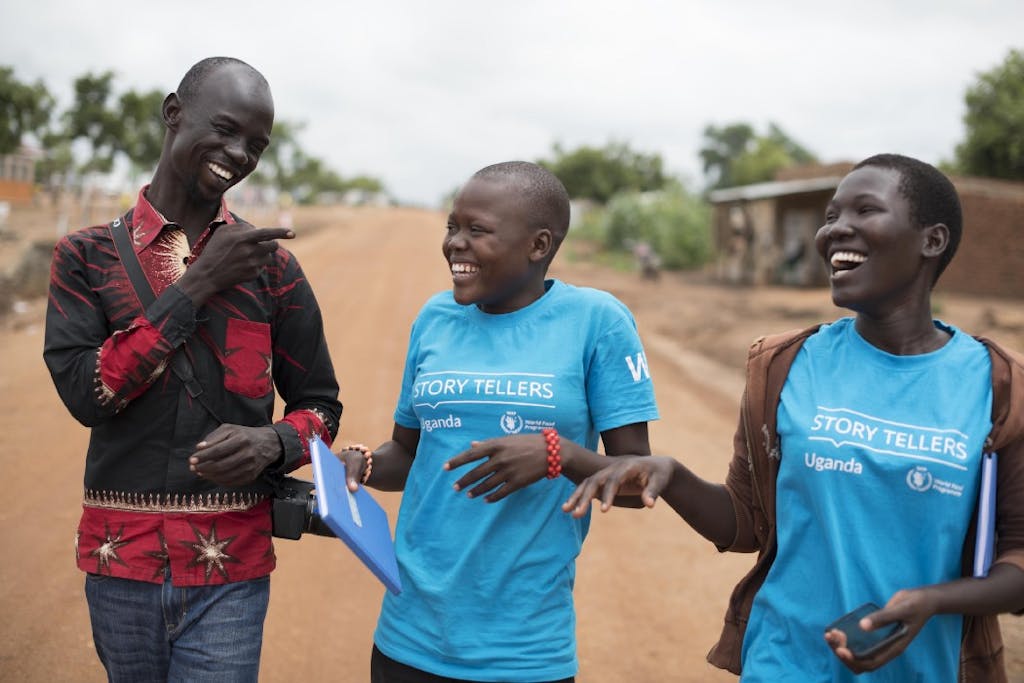 WFP staffer Claire Nevill, who oversees the Storytellers program from the agency’s headquarters in Rome, says the goal is to help lift the voices of those who’ve experienced hunger and poverty firsthand. By teaching photography, videography, and social media skills and providing a platform to tell their own stories, Storytellers hopes to humanize what can seem like a distant or abstract problem — that one in nine people worldwide will go to bed hungry tonight. To date, WFP has trained 200 people in food-insecure communities in Jordan, Chad, Guatemala, Uganda, Bangladesh, and Djibouti.

Bullen helped lead a WFP Storytellers workshop at Bidibidi, a settlement in Uganda where tens of thousands of people have sought refuge from violence in neighboring South Sudan. As a former refugee himself, Bullen says he was honored to help train and inspire the next generation.

The experience not only gave Bullen the chance to share words of hope and encouragement with current refugees, it also reunited him with a childhood friend — a Storyteller participant named Spike — who had grown up with him at the Kakuma settlement in Kenya, which hosts refugees from nearly 20 other countries, mainly South Sudan and Somalia.

As boys living in Kakuma, Bullen and Spike relied on humanitarian assistance from WFP, UNHCR, and UNICEF for food, shelter, and education. For Bullen, their reunion served as yet another reminder of how far he’s come — and how integral support from the UN has been in his life: From feeding and educating him as a child to providing his first camera as a young man.

Bullen says he approaches taking photos as a way to build relationships with those around him. He wants the people he photographs to trust him. This means establishing himself as a neighbor and fellow citizen, as someone who cares about his country, its diversity, and its future.

During an assignment last year in the northern part of South Sudan, Bullen recalls spending the first several weeks getting to know the people and surroundings. “What they ate, I ate. Where they go and dance, I went and danced. We chatted. Now I’m not only a journalist or a photographer, but I’m part of the family.” 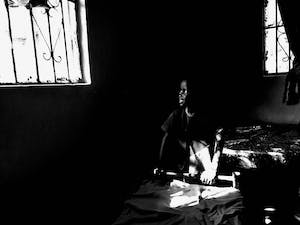 While his camera is helping to reveal a new side of his country, it has also transformed the way he sees the world.

“Photography changed the way I looked into things because it makes me look with a different perspective. The human race is all different colors, but we’re one in blood,” Bullen says.

“Through the lens, I can identify that we, as human beings, are attached to one another and nature. We are all connected and depend on one another.”