During the High-Level Meeting on Universal Health Coverage (UHC) at the 74th United Nations General Assembly, more than 190 world leaders agreed to a historic political declaration that signaled political and financial commitment to bringing health to everyone, everywhere. The political declaration solidified the world’s promises made under Sustainable Development Goal 3 (SDG 3) that everyone should be able to access quality, affordable health services.

World Health Organization (WHO) Director-General Dr. Tedros Adhanom Ghebreysus said, “This declaration represents a landmark for global health and development. …Our vision is not health for some. It’s not health for most. It’s health for all.”

What else happened? We provide key highlights below.

Tensions over Sexual and Reproductive Health and Rights

While the UHC High-Level Meeting resulted in a landmark agreement, the summit was not without its tensions. The United States, represented by Health and Human Services Secretary Alex Azar, formally disassociated with language contained in the political declaration related to the guarantee of sexual and reproductive health and rights (SRHR). Yet a coalition of 58 countries released a statement, read by the Netherlands delegation, which affirmed the need for SRHR as part of the Universal Health Coverage umbrella if we are truly going to be able to achieve health for all.

The UN Secretary-General and multiple member states also stressed that UHC can only be realized with quality primary health care services that are affordable – and comprehensive. This includes availability and access for things like robust mental health services, immunizations, and pre- and post-natal care. 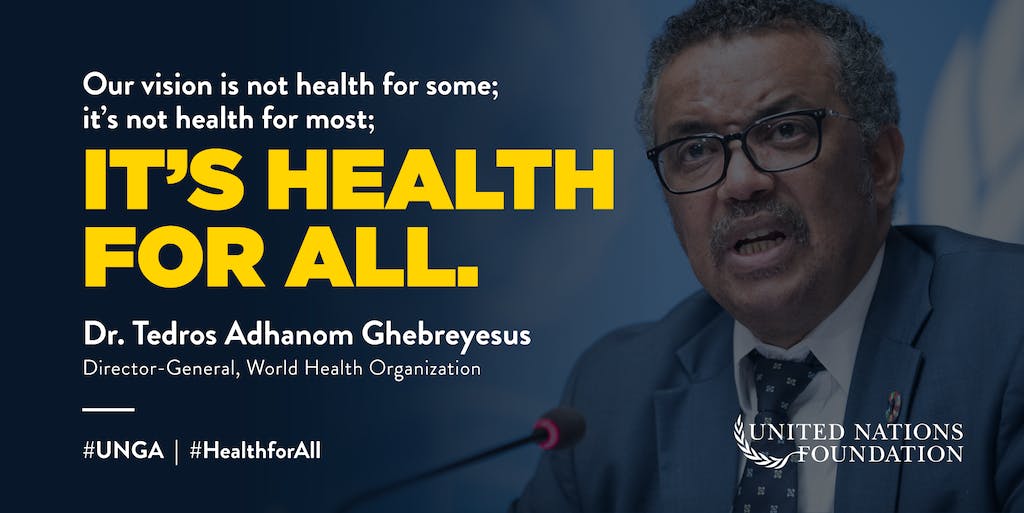 Leaving No One Behind

Throughout the week of the UN General Assembly, global health leaders called for leaving no one behind on the journey to achieving UHC. In order for health for all to actually be universal, it is critical to keep the most marginalized populations, including those in poor and conflict settings, at the center of programs and policies.

Gender equity in particular plays a large role in ensuring we can achieve SDG 3. Data has shown that women, girls, and youth are some of the most vulnerable and marginalized groups who need UHC the most to ensure they are given the chance to live healthy, productive lives.

“It is not health for all if women’s health isn’t included,” said UN Foundation’s Vice President for Global Health Kate Dodson. “Fulfilling women’s health needs across the spectrum of services is not just good for women, it’s good for the world.”

Beyond gender, another major factor that is leaving many people behind is climate change. Leaders and advocates across UN General Assembly week highlighted the clear links between climate change and its impacts on health.

During the UHC high-level meeting, statements from island nation states – which are often the first countries to experience the life-threatening impacts of the climate crisis, yet the least likely to contribute to the actual causes of climate change – stressed the fact that unless we deal with climate change, we will likely fall short of reaching UHC goals.

“The warming world tests our ability to achieve and sustain UHC,” said President of the Republic of Palau Tommy Remengesau, Jr. Nauru’s President Lionel Aingimea added: “Climate change and its impacts present the biggest threat to the livelihood, health, security, and well-being of the Pacific peoples.”

Ultimately, the world must come together to ensure equity is at the heart of UHC implementation. By addressing climate change, reaching the most marginalized populations, and ensuring gender equity remain central to each country’s roll out of programs and policies, we can move closer to achieving the difficult, but necessary goal of achieving health for all.

After all of the speeches and side events at the UN General Assembly, now the hard work of making UHC a reality over the next decade begins.

The Global Action Plan for Healthy Lives and Well-being, which launched on September 24, will be the blueprint for all 12 global health and development agencies, as well as national governments to begin to expand health services and build infrastructure to meet populations’ health needs.

Major questions still remain surrounding the significant financing needed for such extensive program and policy implementation from now through 2030. These financing questions will have to be answered based on individual country contexts, with a mix of domestic financing and international aid funding streams.

The UHC Global Monitoring Report, released just ahead of the UN General Assembly, called for a 1% increase in countries’ Gross Domestic Products (GDP) to be allocated to primary health care specifically to close potential funding gaps.

Other financing options, such as behavior taxes, national health insurance schemes, and even revenue generation through climate mitigation policies (such as ending government subsidies of fossil fuels) will be important aspects of how each country will put UHC into practice.

Fulfilling the commitments in the Political Declaration would mean 1 billion more people would have access to quality, affordable health in next four years, on the road to 5 billion by 2030.

As WHO’s Dr. Tedros said during the UHC summit, “Health is not an outcome of development; it is a prerequisite.” Ultimately, healthy people are essential for sustainable development –whether that be ending poverty, increasing education, promoting peaceful societies, or even protecting the environment.

We must all do our part now to turn pledges into action for a healthier people and planet.

Why Investing in the Global Fund Means Achieving Global Health