Good news at the UN for LGBT Rights

Good news at the UN for LGBT Rights

Great news – we recently had another key victory on behalf of LGBT rights at the United Nations!

At the end of September, the UN’s top human rights body, the Human Rights Council, adopted the second-ever resolution on LGBT rights – making a global statement on equality.

Because of the broad diverse membership of the Council, this resolution will have more impact than if just the U.S. or a Western country alone called for enhanced LGBT rights. This human rights resolution, which was championed by the U.S., illustrates why we need to be fully active in UN bodies like the Human Rights Council.

Join the Better World Campaign in telling Congress that you support U.S. participation in the Council – especially in its critical work to advance global LGBT rights.

During a time when many countries’ backwards and hateful laws criminalize human beings simply for their identity, we need a megaphone that can reach world leaders in every nation, in every language, and advance a change. The Human Rights Council is helping serve as that megaphone and the U.S. must ensure its hand remains on the handle.

A couple key things to note about the resolution: 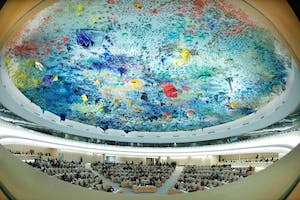 First, it condemns acts of violence and discrimination – in all regions of the world – committed against individuals because of their sexual orientation and gender identity.

Second, due to U.S. leadership, it overcame opposition from several countries before it passed by the largest margin of support for LGBT rights in the Council’s history – a testament to the importance of U.S. participation in the Council.

Moments like these are exactly why the Human Rights Council matters and why the U.S. must remain engaged in it. Join with the Better World Campaign to let your member of Congress know that you support the U.S. working through the Council to advance LGBT rights and other human rights priorities around the world.