The outpouring of love and respect for Kofi Annan from global leaders past and present highlights his stature on the world stage, and reflects widespread admiration for his personal skills as a diplomat and how he used those skills to accomplish important work.

Many tributes reminded us that not only was he the first black African to become Secretary-General, but also the first to work his way up through the ranks of the UN. In addition, he and the UN were jointly awarded the Nobel Peace Prize in 2001.

As the UNF Board pointed out in its statement, during his tenure, Kofi Annan helped establish the Global Fund to Fight Tuberculosis, AIDS and Malaria, adopted the UN’s first-ever counter-terrorism strategy, and led Member States to adopt the “responsibility to protect” framework that addressed genocide, war crimes, ethnic cleansing, and crimes against humanity. Additionally, he strengthened UN peacekeeping and launched the Global Compact initiative that continues to encourage corporate social responsibility.

Here is a small sample of how international figures responded to the news of his passing on Saturday August 18, aged 80. 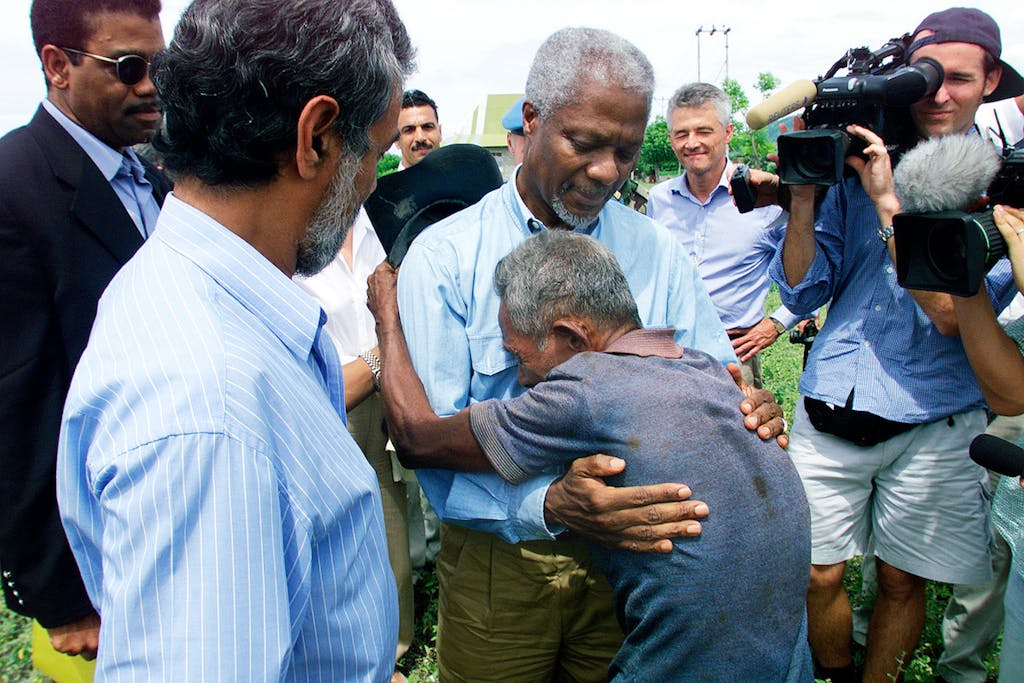 “In many ways, Kofi Annan was the United Nations. He rose through the ranks to lead the organization into the new millennium with matchless dignity and determination.

In these turbulent and trying times, he never stopped working to give life to the values of the United Nations Charter. His legacy will remain a true inspiration for all of us.”

“Kofi Annan, our African and global icon who lived a life deeply committed to serving humanity. He did it with dignity and gave hope to the voiceless. My Friend, My Hero, My Inspiration.”

“He brought considerable renown to our country by this position and through his conduct and comportment in the global arena.”

“Kofi Annan devoted his life to making the world a more peaceful place through his compassion and dedication to service. He worked tirelessly to unite us and never stopped fighting for the dignity of every‎ person. We join the entire United Nations and diplomatic community in celebrating his life and lifting the Annan family up in love and prayers.”

“His integrity, persistence, optimism, and sense of our common humanity always informed his outreach to the community of nations. Long after he had broken barriers, Kofi never stopped his pursuit of a better world, and made time to motivate and inspire the next generation of leaders. ”

Gro Harlem Brundtland, former Prime Minister of Norway, Vice Chair of the UN Foundation Board, Deputy Chair of The Elders

“Throughout his life, Kofi worked unceasingly to improve the lives of millions of people around the world. While we mourn his passing today, we resolve as Elders to continue to uphold his values and legacy into the future.”

“Kofi was a gentle man and a tireless leader of the United Nations. His voice of experience will be missed around the world.”

“Kofi always thrived when meeting young people, listening to them, respecting them, and encouraging them in their endeavours and ambitions. He would always say: ‘You are never too young to lead, and we are never too old to learn.’”

“I was profoundly saddened to learn of the passing of former UN Secretary General Kofi Annan. He was a dear friend and one of the world’s foremost advocates for peace, development, and international understanding.”

“We give great thanks to God for the outstanding Kofi Annan, an outstanding human being who represented our continent and the world with enormous graciousness, integrity, and distinction.”

“Kofi was humanity’s best example, the epitome, of human decency and grace.  In a world now filled with leaders who are anything but that, our loss, the world’s loss becomes even more painful.”