Girls’ and Women’s Needs Don’t Stop in Storms or Conflicts: A Q&A with UNFPA

Girls’ and Women’s Needs Don’t Stop in Storms or Conflicts: A Q&A with UNFPA 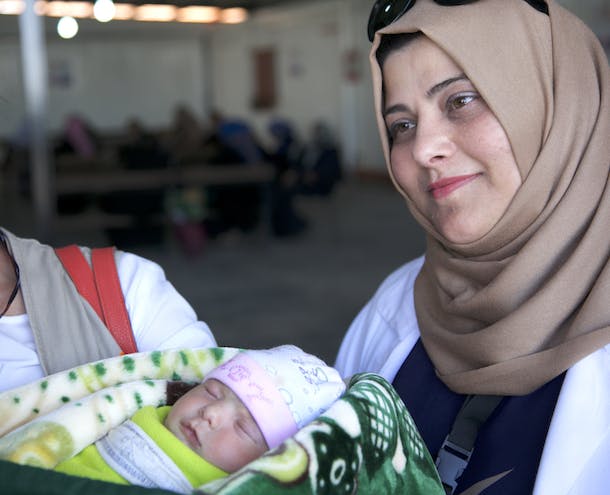 Imagine being pregnant in a refugee camp. Or being a young girl separated from her family after a natural disaster and at risk of sexual violence.

Girls and women in emergency settings – grappling with the effects of disaster, conflict, and violence – have specific needs that are often overlooked, yet essential to their lives and livelihoods. The United Nations Population Fund (UNFPA) supports reproductive health care, access to contraceptives, gender violence prevention, and mental health to girls and women in underserved regions and emergency situations. UNFPA is at work around the globe as the number of displaced women continues to rise.

The UN Foundation recently sat down with UNFPA’s Chief of Humanitarian Response, Ugo Daniels, to discuss the ways UNFPA is actively working toward ensuring quality health care to girls and women in crisis and what supporters can do to help.

UN Foundation: Can you discuss the specific challenges facing girls and women in emergency settings?

Ugo Daniels: There are so many countries in crisis now – the highest number ever of people displaced and the highest number ever of people living in an emergency with humanitarian needs. Now, if we’re speaking specifically about women and girls, we have over 200 million women and girls of childbearing age, that means they’re between 15 and 49, and almost 35 million women who are pregnant in 15 of the least peaceful countries in the world.

The specific needs of these women and girls are huge. When you’re speaking about their needs they have because they’re a woman or girl, it’s things like, you don’t stop menstruating because there’s been a hurricane or a war. You don’t stop getting pregnant. As I said, you’ve got 35 million pregnant women.

Or the flip side, you don’t want to get pregnant under these conditions. Women are more vulnerable to sexual violence. I was looking at the data recently in South Sudan, and 96% of all the recorded – and we know the information is always underreported – survivors of sexual violence are women. The needs are significant, and they’re not going away anytime soon. The trend has been on the increase, certainly for the past 10 years.

UN Foundation: How does UNFPA address the needs of girls and women in crises and humanitarian emergencies?

UD: For UNFPA, we want to make sure every woman and every girl affected by a crisis has the protection and services required for her health and dignity.

So, what does this break down as?

It’s making sure that if you’re pregnant, you can deliver safely – that you can have antenatal checkups, and that there will be someone with you who is trained to deliver that baby. It means that if you have complications and require surgery, that there is a medical theater that you can go into and have the surgery that you need. And it means that if you don’t want to be pregnant, you have access to contraceptives to prevent pregnancy.

Looking at the data, 75% of Syrian refugees said, ‘We don’t want to get pregnant under these conditions,’ so there’s a clear need for access to contraception. I mentioned earlier that cases of sexual violence are underreported, but we know that it happens. And we know that there are certain medical services that a woman needs after sexual violence. So, we want to make sure that she has access to the medical services, but also the psychosocial support and counseling that she needs.

UN Foundation: The U.S. has historically been a leader in supporting UNFPA’s humanitarian work, although that has changed under the recent Administration. What has U.S. leadership and partnership on this issue meant in the past?

UD: U.S. leadership on this has been huge on three aspects.

One aspect was around funding. The U.S has been either the top donor or one of the top three donors on this particular issue for UNFPA, as well as a global leader on funding for this issue.

Two was the advocacy leadership on the issue. The U.S. government had a program called ‘Safe from the Start,’ to make sure that in any emergency, right from the beginning, the specific needs for women and girls were taken into account.

The third piece that was important was the political leadership of the U.S., speaking up on the importance of this and raising the consciousness that this is what women and girls experience. Women and girls require these services, governments are accountable and responsible for providing these services, and governments that provide the funding also need to make sure that there’s funding available for this.

UN Foundation: What are the biggest challenges UNFPA is grappling with right now in terms of its humanitarian work?

UD: If I start at the country level, there’s been a lot of progress in terms of being able to provide these services, but there are still quite a few gaps.

Being able to provide contraception has been a gap and remains a challenge. Many times, it’s difficult to go into a community and say, ‘Here are these services; they are available to you.’ There’s often a lot of stigma and political controversy around providing family planning.

Another challenge at the country level has been that treating survivors of sexual violence isn’t an area that is really taught in medical schools. Many times, those guidelines don’t exist. When capacities on the ground are weak, it’s hard to respond and save lives when there is also a significant focus that needs to be made on improving the health system and how the government and local providers work.

Then when you look at responding to emergencies overall, other areas like food, water, and shelter are often considered more important. We’re certainly not saying that these are not important; we’re just saying that addressing the special needs of women and girls is equally as important.

I heard on CNN during Hurricane Harvey that there were a lot of calls from pregnant women and women who needed sanitary supplies. And that’s in the U.S. So, you can imagine what the situation is in many of the world’s poorest countries and low- to middle-income countries that are impacted by crises. So we compete against other needs in these settings that are more familiar to and easily remembered by people as compared to this.

Then, at the global level, to be quite frank, speaking about getting or not getting pregnant, experiencing sexual violence, these are really difficult topics, deeply rooted in faith, culture, and social norms. They’re not easy topics and this continues to be a challenge that we have to contend with.

UN Foundation: What is needed to address these challenges and how can individuals help?

UD: There are a couple of things. One is to go to www.unfpa.org and donate.

UN Foundation: Is there anything in your job that gives you hope that we can make progress and really help girls and women in crisis situations?

UD: Of course, yes. I’ve been talking a lot about what the challenges are, but what I haven’t really spoken on is the number of women and girls whom I have personally interacted with and seen the impact of providing these very simple, basic supplies and relief items.

I was speaking to a Syrian refugee at a train station in Berlin who had been displaced and she was talking about the experience – the war and destruction – but when she broke down and cried was when she talked about the fact that she has not had a shower in the past two weeks. She talked about how she had not felt clean. How demeaning and demoralizing that it would be for that to break her after everything she has survived. By giving her a dignity kit, which has soap, a comb, toothbrush, toothpaste, and all these things, we could make a difference in her life physically, but also mentally in being able to cope with that situation.

There are many individual cases like this, of how much of a difference it makes to the life of a woman and a girl in this situation. So, it’s not just about a physical state, it’s about doing it in a way that fosters the empowerment, choice, and dignity of a person, even in that situation.

UN Foundation: Is there anything else you want to say?

UD: As a humanitarian, our whole focus is to save lives, so I have lots of lovely pictures of women who have given birth in the most horrific settings because UNFPA was there, UNFPA had trained the health worker or midwife, and UNFPA had provided the medical equipment so these women could give birth. And I’m looking at these pictures, which are pictures of hope in the midst of crisis, and I’m thinking to myself, ‘So now what is the life that this baby is going to lead and live?’

It’s not just about saving lives, it’s about the quality of that life. The lines between what we do as a development worker and as a humanitarian worker are artificial lines. The world we live in now is challenged by development issues, humanitarian issues, and political issues, but that all of this needs to come together to save lives and ensure a good quality of life for these people.

There are many great minds thinking about this, and UNFPA is right at the forefront of this discussion as a humanitarian actor, as a development actor, as an actor defending human rights, and an actor that will continue to stand for the voice and empowerment of women and girls globally.