By Michelle Milford Morse and Geeta Rao Gupta on December 19, 2019

In January 2019, five million women in India formed a 385-mile-long human protest, ensuring the year started with demands for gender equality squarely at the forefront. The year continued with global demands for equal pay, reproductive rights, representation in government, and much more.

But while we saw some progress in 2019, it’s clear we need many more than five million people to demand equality and even more loudly. As we enter a new decade, we are continuously reminded of just how pervasive gender inequality is – and how much more we need to do.

Two of the UN Foundation’s gender experts – Geeta Rao Gupta, Executive Director of the 3D Program for Girls and Women and Michelle Milford Morse, our Vice President for Girls and Women Strategy – sat down to reflect on 2019 and what’s coming up in 2020.

They tell us that the stakes are high: though 2020 will mark 25 years since a landmark conference in Beijing sparked a generation of work on women’s rights and empowerment, there is still no country in the world where girls and women are equal to boys and men. In the U.S. 2020 will mark 100 years since women won the right to vote, yet a  new report says it will take another 100 years to reach gender equality globally. It’s time to make this a priority.

MMM: Hi, Geeta! So here we are, at the end of another year of great consequence for gender equality, and on the cusp of a truly pivotal year for our movement. What did you find most encouraging in 2019?

GRG: The most encouraging moment for me was when the world recommitted to sexual and reproductive health and rights. Government leaders and activists gathered in Nairobi to celebrate the 25th anniversary of the landmark International Conference on Population and Development (ICPD) in Cairo.

I was truly energized by what I saw in Nairobi. Twenty-five years after sexual and reproductive health and rights were globally recognized, here’s what changed: The voices of young people were louder than ever. The representation of people with disabilities, LGBTQI people, and indigenous communities was stronger. There has been great progress in how the global community addresses the needs of girls and women in humanitarian crises.

I saw the world come together again because women’s rights are human rights and because healthy, empowered women who are able to live free of violence are central to progress on everything, from combatting climate change to ending poverty. 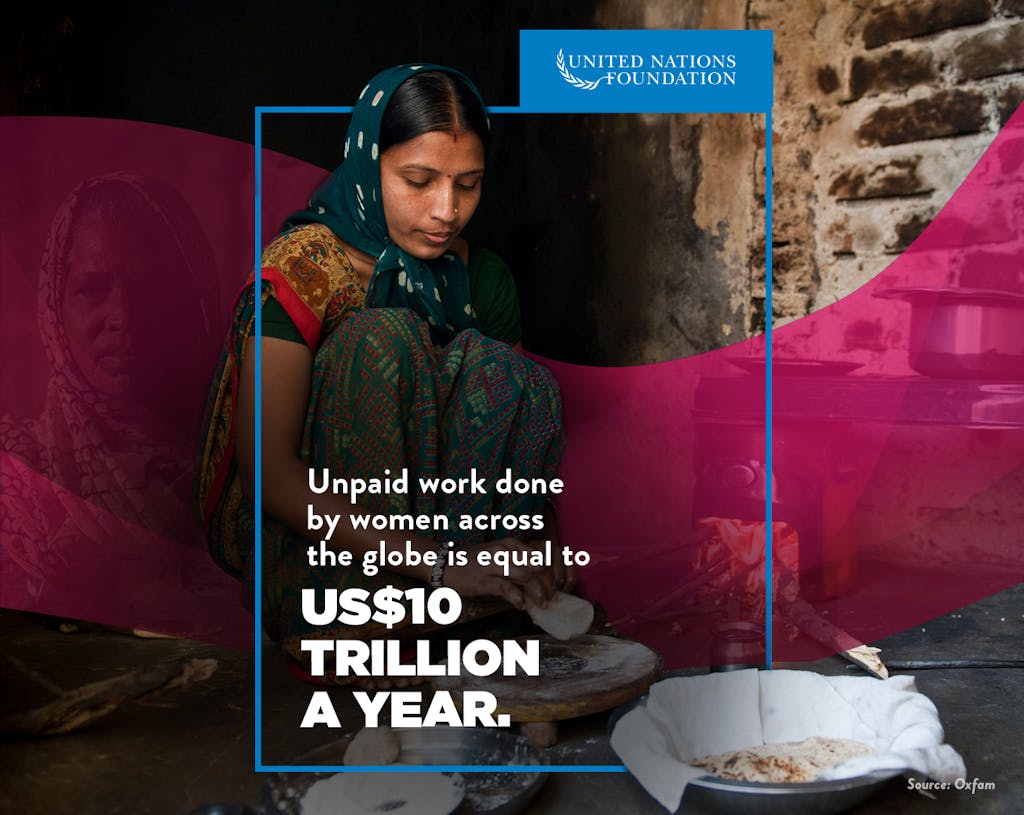 GRG: What did you find most encouraging in 2019?

MMM: Watching the U.S. Women’s National Team win the World Cup in July in Paris, and then the loud chorus of fans chanting “Equal Pay!” That kind of vocal, insistent solidarity for women is so essential. The team members are still fighting for equal pay, but watching them triumph was my favorite moment of 2019.

GRG: The pay gap remains a stubborn and near universal problem. It is particularly egregious for women of color. So much of women’s work goes unpaid and unacknowledged. In fact, that unpaid work is worth an estimated 10 trillion dollars a year.

MMM: It’s a deeply frustrating problem. It also might be the breakthrough issue that accelerates equality. From Starbucks to Salesforce, to the blockbuster year we had for state legislative action on pay equity, I see hopeful progress. It’s a myth that pay equality is too hard, or that companies can’t afford it. I recently gave a talk to a group of high school seniors at the Ann Richards School for Young Women leaders in Austin, Texas. Equal pay, and how to get it, was the issue they most wanted to talk about. So, in fact, companies that want to win the best talent can’t afford ignore this issue.

MMM: Where else have we made progress?

GRG: Another area that we have made progress on this past year is using numbers and data to show the impact that gender inequality has on health outcomes. I was honored to be one of the researchers who contributed to The Lancet Series on Gender Equality, Norms and Health which was released this past summer, summarizing the need for more data and research on these important linkages. It really is quite shameful that we are at the cusp of 2020 and still have significant gaps in data on girls and women. Now, thanks to initiatives like Data2X, a case is being built at the highest levels to fill gender data gaps. That gives me hope.

MMM: Me, too! I’m also hopeful that our movement is beginning to recognize that investing in the individual potential of a girl or woman is necessary, but not enough. She also needs the right to inherit that land she cultivates, the ability to organize for and demand a safe workplace, the right to marry if and when and whom she wants, the freedom from fear and harm that is only possible in societies that doesn’t sanction or endorse gender-based violence. Real progress for girls and women requires systemic and durable change, in policy, in laws, in norms.

MMM: That’s why you and I both did a big happy dance when Melinda Gates announced she was investing $1 billion in gender equality in the U.S. over the next ten years!

GRG: Indeed. She’s leading the way and shining a light. 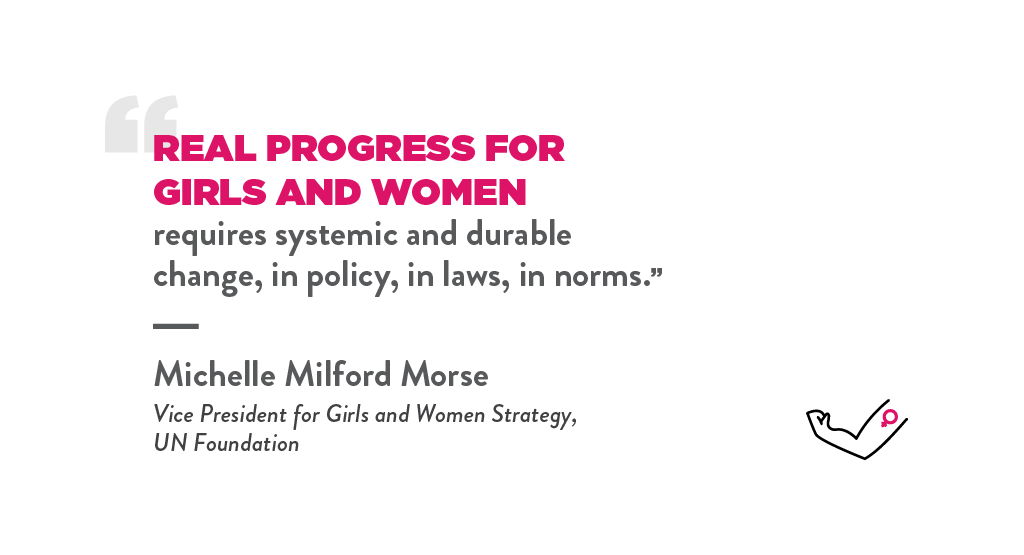 MMM: People too often assume gender equality is a problem for other countries and other women.

GRG: But gender inequality is certainly an issue in the U.S. context. The U.S. is just one of two countries left in the world that still does not guarantee paid maternity leave. Last year, there were fewer women among executives of Fortune 500 companies than men named James. And, maternal mortality remains a rampant injustice: The U.S. has the worst maternal mortality rate of any developed country, and the picture only gets more grim as we look at the data across minority groups.

MMM: And progress is undermined by our lack of equity in decision-making and leadership roles. We have yet to elect a woman head of state. While we’ve made gains in Congress recently, women still comprise less than a quarter of elected officials there.

MMM: Given the enormity of gender inequality, what keeps you up at night?

GRG: One issue that worries me terribly is the Global Gag Rule that restricts U.S. foreign aid to providers that choose to provide or advocate for safe abortion services, even with their own private funds, and even where it is legal. This policy restricts access to contraception and has been shown, time and again, to increase abortion in areas most heavily reliant on U.S. foreign aid.

The other statistic that haunts me is that, according to UNHCR, 68.5 million people were forcibly displaced from their homes by the end of 2017, fleeing war, persecution and violence. That is greater than the population of the United Kingdom! Displaced women and children are the most vulnerable and I worry that we are not doing enough to protect their rights and dignity.

GRG: How about you, M3? Which problem is keeping you awake at night?

MMM: For me, it continues to be violence against girls and women. An estimated one in two women murdered worldwide were killed by their partners or family in 2017. Every year, violence against women is as serious a cause of death and incapacity among women of reproductive age as cancer.

The UN and the UN Foundation family have been emphasizing this important point for many years, only to be reminded again in the most tragic, painful, and personal circumstances with the loss of our deeply admired and cherished colleague, Jennifer Schlecht, who was a devoted champion for the rights of women and girls in crisis situations. Jenn and her 5-year-old daughter Abaynesh were victims of domestic violence.

GRG: Her accomplishments, her memory, her importance to our world, the horrifying injustice of two lost lives will inspire us to keep working for girls and women in 2020.

MMM3: I am eager to get started, to acknowledge the 25th anniversary of the Fourth World Conference on Women in Beijing and to push for more action and ambition for girls and women. The Platform of Action created there continues to be the strongest consensus on girls’ and women’s equality and justice ever produced by the world’s governments. It is frustrating that 25 years later, girls and women are still not equal anywhere in the world.

GRG: It’s long past time for more action and ambition, indeed. We must finally seize on the promises made in Beijing to focus unequivocally on women’s rights – not just because it benefits economies but because it is a grave injustice to not do so. 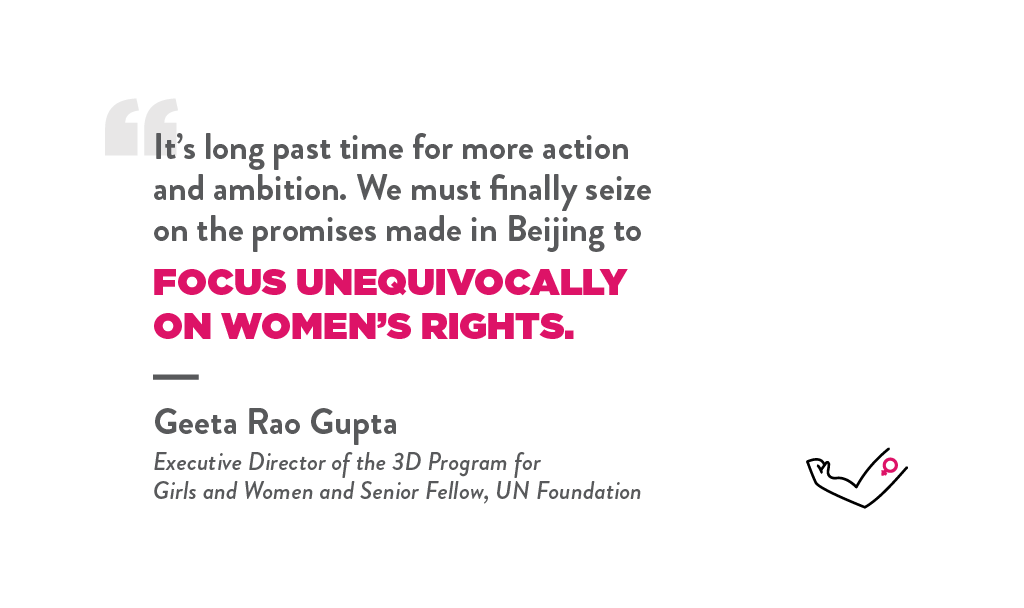 MMM: I think fair-minded people everywhere agree. We’ve waited too long already for equality and justice. Geeta, do you have a work New Year’s resolution?

GRG:  Yes – to take full advantage of the coming year’s anniversary of the Beijing conference to fully support and mobilize grassroots women’s movements, especially emerging ones that are led by young women. Giving them the space, the mentorship and funds to organize and mobilize, to set agendas and push for change. That is what I plan to work toward in the coming year. How about for you?

MMM: I resolve to see that we get the most ambitious commitments – by governments, individuals, and companies – possible in Paris in July at the Generation Equality Forum. And I’m going to stop talking about what an educated girl can do for the world, and instead what the world can do for an educated girl!

It would be nice to finally put down this protest sign and stop marching, but we are still just getting started. So, Happy New Year, Geeta! Let’s go do this! 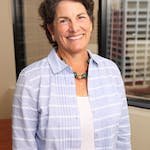 What If Women Drove The Product Journey?