Around 1 in 10 girls under the age of 20 has experienced sexual violence according to data from the United Nations.

Every year, approximately 15 million girls are married as children.

Millions more are denied their right to go to school, plan their families, and pursue their potential.

These girls deserve better. They have the right to live free from violence and to shape their own futures – it’s time they had the chance.

On October 11, the global community will mark International Day of the Girl, and this year, the UN is recognizing adolescent girls around the world who are breaking the cycle of violence in their communities.

There is a lot to be done to empower girls and make them less vulnerable to violence, including: making sure every girl gets an education; ending harmful practices like child marriage and female genital mutilation; expanding access to voluntary family planning services and information; and providing girls with leadership skills and economic opportunities.

Achieving all of this won’t be an easy task, and it won’t happen overnight, but that’s no excuse not to act – in fact, it’s reason to step up our collective efforts.

One thing all of us can do right now is to help change attitudes and change the narrative on girls. In too many communities and too many families, girls are viewed as “less than” boys, as financial burdens, or as someone’s property.

This is just plain wrong.

Girls are powerful agents of change who lift up their families, their communities, and the world.

This isn’t rhetoric; it’s reality. Research shows when girls are healthy, educated, and empowered, they grow economies; they earn more money, which they invest in their families; and they have healthier children. Around the world, girls are busting the cycle of poverty and promoting peace and progress.

That’s why the UN Foundation’s Girl Up campaign has launched #GIRLHERO, a digital movement to recognize and celebrate girls. In the days leading up to International Day of the Girl, we’re asking people to post a photo on social media of a girl who inspires them. That girl is then encouraged to pass iforward and share who inspires her. Our goal is to light up social media feeds with stories of girl power. 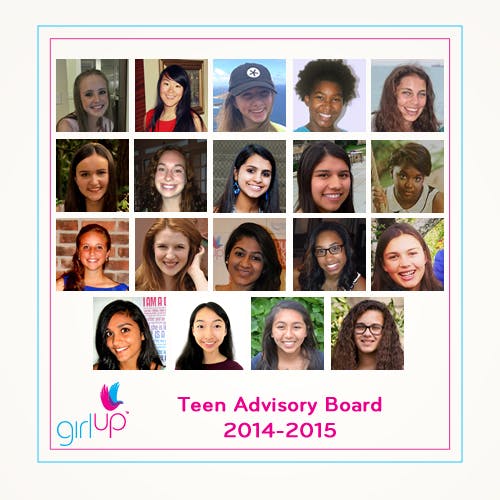 The UN Foundation is privileged to collaborate with amazing girls around the world, and I’m recognizing each member of the 2014-2015 Girl Up Teen Advisor class as my #GIRLHERO. This group of girls advocates for girls around the world and provides invaluable advice and ideas for our work. They’re talented, passionate, and already leading the way to a better world.

International Day of the Girl fittingly coincides with the birthday of one of the world’s greatest advocates for gender equality – Eleanor Roosevelt. She wrote: “One thing I believe profoundly: We make our own history.”

Together let’s make a history where girls are safe from violence and recognized as the heroes and fellow members of humanity that they are.