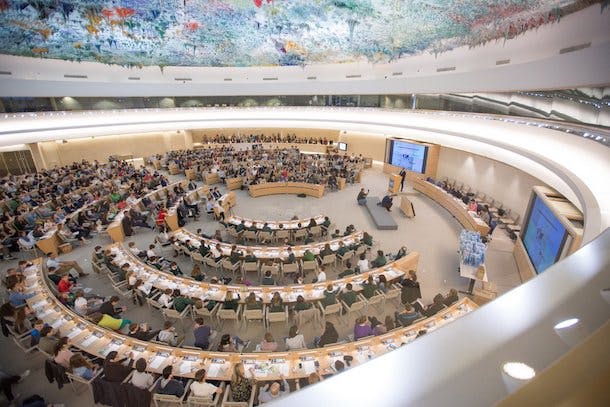 The top United Nations human rights body, the UN Human Rights Council, convened yesterday, March 6, 2017, for a high-level discussion on supporting the human rights of youth in the implementation of the Sustainable Development Goals (SDGs). Recommendations from GenUN advocates – members of the United Nations Association of the United States of America (UNA-USA) who are age 25 years or younger – informed the discussion on a wide range of issues.

Specifically, the conclusions of a new UN Human Rights Office report, “Protection of the Rights of the Child and the 2030 Agenda for Sustainable Development,” reflect several of the priorities outlined by UNA-USA GenUN advocates from California, Florida, Washington, D.C., Texas, and New York. The GenUN priorities were gathered by UNA-USA in 2016 via a focus group and later transmitted to the UN Human Rights Office. More than 10 countries and 30 other civil society groups also submitted proposals to be included in the report.

The report from the UN Human Rights Office includes several key recommendations from the GenUN focus group, including the need for implementation of the Sustainable Development Goals to be inclusive of LGBTI youth, refugees, and migrants. The report also includes the GenUN recommendation that additional attention be given to the pernicious effects of bullying and ensuring “Internet Freedom,” or the concept that youth have the same rights to expression online as they do offline. The report takes note of this suggestion, stating: “Proactive measures are needed to support participatory forms of social accountability, for example through the provision of safe spaces online and offline for children to prepare their views and inputs.”

Additionally, the report indicates that youth are envisioned as active participants toward the implementation of the global goals and not just bystanders, reflecting another outcome of the UNA-USA discussion.

The UN Human Rights Office study will ultimately influence the basis of a new UN Human Rights Council resolution focused on the protection of children’s rights. Council resolutions are non-binding on UN member states, but they help strengthen global norms and standards of conduct related to human rights. The Council is composed of 47 countries, drawn from UN member states, and seats are distributed geographically to ensure that each region has a voice on the Council.

The UN has long-held that human rights and sustainable development are interrelated and mutually reinforcing. “Efforts to achieve the SDGs are a critical means to help protect and promote human rights and address inequalities and discrimination – all of which are vital for building peaceful, just, and inclusive societies,” UN Development Program Administrator Helen Clark declared at the UN Human Rights Council’s opening session this year.

UNA-USA organized the meeting with the GenUN advocates in September 2016 as the latest in its programming under a new human rights skill-building initiative for youth and students across the country. During a conference call, students were asked to share their perspectives and experiences from their communities and schools to help inform efforts at the UN Human Rights Council meeting on SDGs, youth, and human rights.