From Then to Now: Five Years of Girl Up

From Then to Now: Five Years of Girl Up 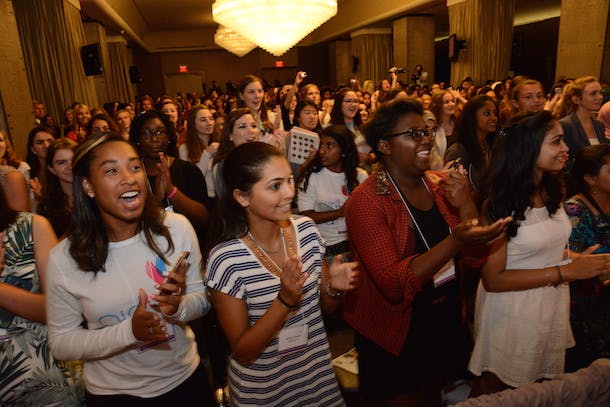 Five years ago, the United Nations Foundation took a leap into adolescent girls’ empowerment with the launch of Girl Up, the first-of-its-kind “for girls, by girls” campaign.

Since then, Girl Up has grown exponentially and evolved from a campaign largely focused on grassroots fundraising in the United States to a global community of half a million passionate advocates for girls around the world.

Girl Up has grown well past that initial idea. We have learned a lot over the last five years, thanks to the guidance of our Teen Advisers and thousands of other Girl Up supporters who have challenged us to continuously improve the campaign. Today, Girl Up is teaching girls to be better leaders, fundraisers, and advocates. And no longer just an American campaign, Girl Up has become a borderless movement, with 1,100 Girl Up clubs in 66 countries.

Girl Up and its team – led by Melissa Hillebrenner – have worked tirelessly to support the empowerment of girls everywhere, and their successes have been many. Since its launch in 2010, Girl Up has raised $5.6 million for UN programs that help adolescent girls go to school, see a doctor, and stay safe from violence. Girl Up supporters were also instrumental in a number of advocacy victories, most notably passage of the Girls Count Act, which will help ensure all children are registered at birth.

Perhaps Girl Up’s greatest accomplishment, however, is the generation of current and future leaders Girl Up has created through its unique training platform. From Club and Campus Leaders to Teen Advisors, Girl Up supporters are tackling the toughest issues facing adolescent girls in developing countries and are helping to ensure the world takes notice.

I’m proud of what we’ve accomplished in these first five years. We look forward to many more successes as we work together to ensure all adolescent girls have the opportunity to make their dreams a reality.