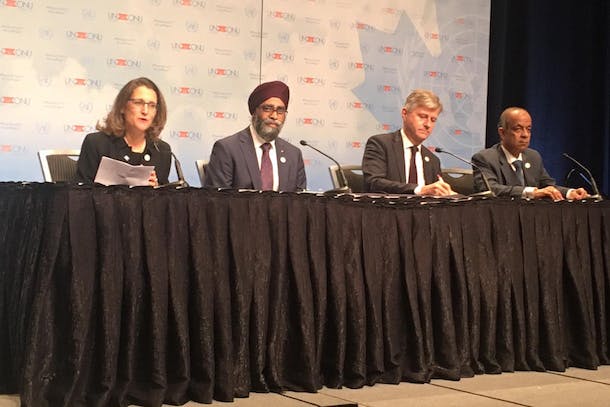 “UN peacekeeping operations are on the frontlines of our efforts to prevent the emergence of lawless regions where insecurity, transnational crime, and extremism can flourish. They are an investment in global peace, security, and prosperity.”– United Nations Secretary-General António Guterres

That powerful statement was in full effect last week as the largest gathering of defense ministers working on peacekeeping met in Vancouver, Canada to discuss the dangerous and complex challenges faced by peacekeepers in 15 UN missions across the world.

A total of 79 member states sent delegations of ministers and defense chiefs to Vancouver, which hosted around 550 delegates.

Here are four key takeaways from the conference:

1. Prime Minister of Canada Justin Trudeau unveiled the new Vancouver Principles on the prevention of the recruitment and use of child soldiers in peacekeeping operations. As of this writing, 54 countries had pledged to sign onto the Vancouver Principles. The principles are being led by retired Lieutenant-General Romeo Dallaire, who witnessed the Rwandan Genocide and has worked to prevent such atrocities since.

2. Canada announced a plan to launch the Elsie Initiative on Women in Peace Operations, a new package of initiatives meant to address shortcomings in contributions of female soldiers, police officers, and community leaders. Canada is contributing $21 million to support this initiative. In addition, 26 countries separately pledged to integrate gender perspectives and increase women’s participation.

4. Major Seitebatso Pearl Block was presented with the UN Military Gender Advocate of the Year Award. Block has been deployed twice to the Democratic Republic of the Congo with the UN Organization Stabilization Mission (MONUSCO), first in 2010 as an information operations officer, and again last year as a force intervention brigade planner. She was hailed for developing strategic projects adopted and launched by MONUSCO that incorporated the use of technology in combatting conflict-related gender violence.<

As the delegates return to their respective missions, the UN will continue this work with member states to implement these pledges with the overarching goal of supporting the modernization and professionalization of UN Peacekeeping. These pledges are critical in helping UN Peacekeepers better protect civilians, facilitate lifesaving humanitarian assistance, and promote stability and security in fragile regions. Moreover, we are encouraged by the support and commitment by Canada’s support for UN Peacekeeping.