The Forecast for Climate Week NYC 2017

The Forecast for Climate Week NYC 2017 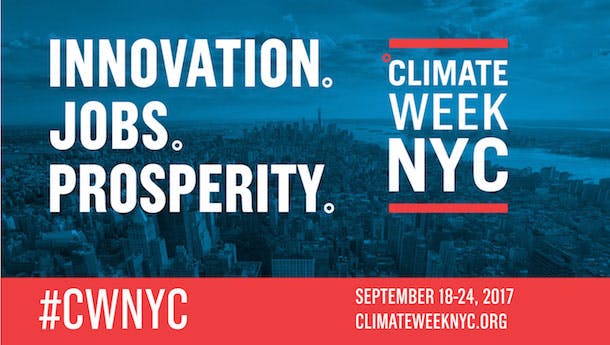 From record-breaking extreme weather to a new wave of commitments from cities, states, and businesses across the U.S., 2017 has been an unprecedented year for climate change.

And it’s only September.

Climate Week NYC 2017 arrives at a critical time, representing the first gathering of international climate leaders since the U.S. announced it will withdraw from the Paris Agreement. The summit, which will take place September 18-24 alongside the UN General Assembly and Global Goals Week, will advance progress on both sustainable development and climate action.

This year’s theme, “Innovation. Jobs. Prosperity.” speaks volumes about the state of that progress. Around the world, businesses, non-governmental groups, cities, states, and other subnational actors are driving climate action – and unlocking opportunities for people, economies, and the environment. To accelerate the discussion and generate new solutions, the week will feature a host of events, including exhibitions, seminars, debates, and concerts.

Climasphere, the UN Foundation’s digital account dedicated to communicating all things climate and energy, will cover the Opening Ceremony live on September 18 as well as key events on September 19.

Here are some big moments to look out for:

Additionally, the SDG Media Zone will stream live interviews, discussions and announcements focused on climate action throughout Thursday, September 21. To see the full list of events for the week, check out Climate Week’s Events Program.
Plus, be sure to follow Climasphere on Twitter, Facebook, and Instagram and the hashtag #CWNYC2017 for all the latest updates during the week.