Famine Response: It’s Time to Move Beyond Empathy to Action

Famine Response: It’s Time to Move Beyond Empathy to Action 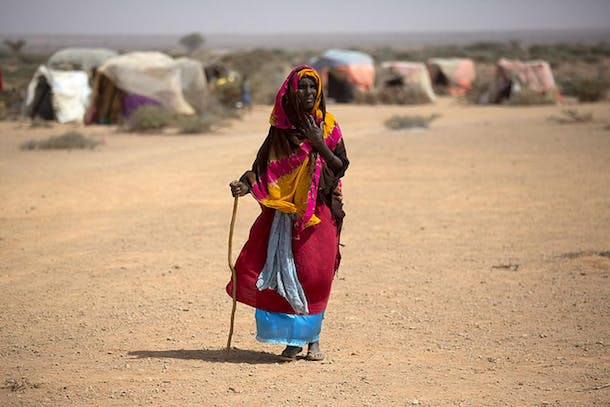 By Vimlendra Sharan, Director, Liaison office for North America of the UN Food and Agriculture Organization

For a world producing enough to feed its entire population, famines are a sad reminder of our inequitable growth models and governance failures.

Despite the rigorous definition by the United Nations for declaring a famine (1 in 5 households in an affected area must be severely short of food; more than 30% of the population must be malnourished; and at least two starvation-related deaths occur per day for every 10,000 members of the affected population), the world today is witnessing famine in South Sudan and near famine like situations in Somalia, northeast Nigeria, and Yemen.

With “business as usual,” nearly 20 million people stand to lose their lives, many innocent children among those.

Across Somalia, 6.2 million people face acute food insecurity through June 2017. Most of these are in rural areas making up to 65% of the population in Integrated Food Security Phase Classification (IPC) Phases 3 and 4, and 87% of those in IPC 4. The risks are highest in Somalia’s southern breadbasket and northeastern pastoral areas. The drought of 2016 has left most rural households with precariously low stocks and farmers without seeds to plant, has cut wage labor income, and increased food and water prices. In northern pastoral areas, total livestock losses have left the population on the brink of destitution.

South Sudan faces one of the world’s worst humanitarian and food security situations today. More than 2.4 million people have been displaced by violence in South Sudan since mid-December 2013, and it is estimated that around a third of South Sudanese are now food insecure with the latest IPC analysis carried out in September 2015 by the FAO, indicating that food security has deteriorated at an alarming rate since the outbreak of the conflict.

Severe food insecurity threatens more than 17 million people in conflict-ridden Yemen. Twenty of the country’s 22 governorates are in ‘emergency’ or ‘crisis’ food insecurity phases, and almost two-thirds of the population is now facing hunger. Two governorates that account for almost a quarter of Yemen’s population risk slipping into famine. Decrease in domestic production, disruption of commercial and humanitarian imports, increasing food and fuel prices, rampant unemployment, the collapse of public services and social safety nets, and relatively low levels of funding for UN agencies providing food assistance are contributing to a worsening food security situation.

A total of 5.2 million people may face severe food insecurity during the coming lean season in Adamawa, Borno, and Yobe States of northeastern Nigeria. Conflict and the resulting displacement have left millions without food and turning to negative coping strategies like selling critical assets just to survive. Already, poor and vulnerable host communities have absorbed large numbers of people fleeing violence, placing considerable pressure on fragile agricultural and pastoral livelihoods, while the insecurity has disrupted markets and food availability. 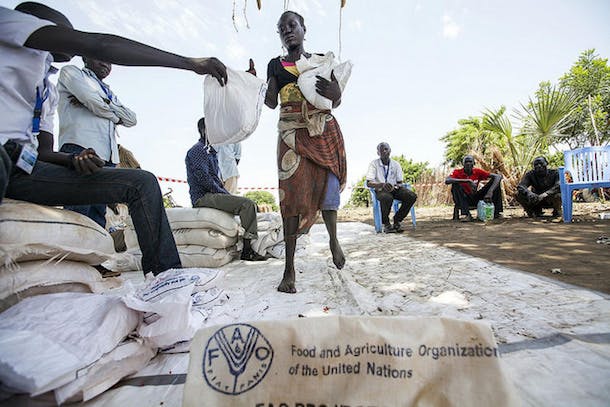 An analysis of the situation prevailing in these countries brings forth three aspects of the crisis common to all of them.

The common denominator facing these four countries is protracted conflict.

Conflict exacerbated by decades of chronic underinvestment in rural development and in face of extreme climate events, such as the current drought in Horn of Africa, has taken these countries to the brink of catastrophe. There is an immediate need to step up the political process for establishing peace and security, pending which, the world must bring adequate pressure or goodwill to ensure unhindered and safe access to the humanitarian community.

The second issue is around the centrality of agriculture in livelihoods and resilience building. Conflict and drought hit hardest in rural areas, where food security, nutrition, and income generation are largely dependent on local agriculture and livestock production. As agricultural seasons are missed and livelihoods abandoned, the humanitarian caseload builds, placing unsustainable pressure on the humanitarian system. This is what we are facing today.

There is an urgent need to work on prevention, including within the context of the emergency itself for protecting rural livelihoods, keeping animals alive, and ensuring the planting of crops.

In our deliberations on humanitarian aid, agriculture cannot and should not come as an afterthought. A combination of food assistance and food production support is the only way to make any dent in the scale of hunger we are witnessing in these countries.

The third point is about inadequacy of funding and the need to think about new funding instruments and different funding mechanisms. Despite early warning, the international response to the crisis has been slow and funding woefully short. Perhaps there is a need to think of arrangements that can help isolate funding decisions from geopolitical agendas. Use of pre-arranged financing instruments to reduce the risk of future disasters will have to be thought of: these could include insurance or contingency loans from development banks or pooled funds with insurance like triggers. The availability of immediate, adequate, flexible and multi-year funding for humanitarian and developmental response can never be over emphasized.

Tackling these issues will require a herculean effort on part of all stakeholders – the governments, the United Nations and its agencies, the donors and the Non-Governmental players.

Food and Agriculture Organization of the United Nations (FAO)

FAO is the premier UN Agency on agriculture, which has, since the beginning of the crisis, and even earlier, been active in all these countries. Recognizing that livelihoods are people’s best defense against famine in rural areas, FAO is helping the most food insecure rural families meet their immediate food needs, while giving them the means to continue farming their land, raising their animals, and producing the food they need to survive this crisis.

Despite continued constraints to humanitarian access, it is acting to meet the two-fold challenge of responding to urgent needs triggered by the current crisis, while continuing vital livelihood protection and support programs in less-affected states. Through a mixture of immediate assistance to the most vulnerable communities and longer-term support to build the capacity of local, state, and national government institutions, it is focusing on strengthening food security and building sustainable, agriculture-based livelihoods.

The planting season has begun or is imminent in these countries. To take advantage of this situation to address hunger and build resilience, FAO is already prepositioning fast maturing, nutrient-rich cereal and pulse seeds along with fertilizer in all these countries.

FAO’s support is not only critical to the humanitarian response, it is cost-effective and lasting.

Crop kits in the form of wheat or sorghum seeds and fertilizers cost approximately between $100-$200 per household, but can provide families with three months of cereal worth up to almost $4,000. Similarly, vegetable kits not only contribute to income, but have shown a positive effect on nutritional standards of children.

It is thus both strategically and economically prudent to keep agriculture front and center in our response to famines. We must remember that while food aid can help people survive, agriculture helps them live.

However, for any action to be effective, irrespective of the agency undertaking it, it is imperative to ensure sufficient and timely funding. Nearly $4.4 billion are required by all agencies, combined against which only 26% has been mobilized.

FAO, for its activities, has projected a requirement of $340 million, of which it has received only $115 million. Like other humanitarian agencies, it is woefully short of funds to deliver, and there are well-founded fears that if this agricultural season is missed, millions would be pushed over the edge.

To save a fellow human from the indignity and injustice of death by starvation, it’s time to move beyond empathy to action.

To learn more about the looming famine crisis and FAO’s response, click here.