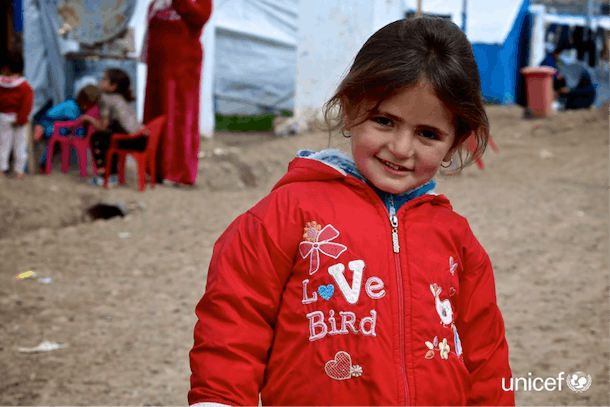 This month the crisis in Syria enters its fifth year, and right now, over 100,000 children from Syria have been forced to flee their homes and are living as refugees in Iraq. At the same time, conflict in Iraq has displaced millions of people, leaving even more children in urgent need of humanitarian assistance.

I recently spoke with Jeffrey Bates, Chief of Communications and Strategic Partnerships for UNICEF Iraq, to ask him about what the agency is doing to support children in need and what we can do to help.

Jenni Lee: What is life like for Syrian children in Iraq?

Jeffrey Bates: There’s two ways that these children have taken refuge. One is in camps; about 40% of all the Syrians live in a camp-type setting. The camp set up for Syrian refugees tend to have schooling, caravans or hard structures to live in, and safe place spaces. But about 60% of the refugees have taken up homes in host communities, usually with relatives or in rented apartments, but sometimes in informal shelters such as unfinished buildings.

But in both camps and host communities you’re talking about displaced people who’ve been taken from their community networks and put into a foreign land where they don’t speak the language; they don’t have the connections and support systems they once had.

The children in camps though have better access to services because they’re in one place. The children who are in host communities, some of them, particularly if their families were wealthy, will have good access to services, others, because they are scattered about and we don’t have as good a reach to them or even records of them, may not be going to school, have access to health services, or be ensured the types of protection as children in camps.

JL: Could you tell us more about what UNICEF is doing?

JB: We have four main programs that work directly with Syrian children.

Then we’re also working in a back-to-school campaign mode for Syrian children who are not in camps. This is a mass communication campaign to get children to register, then enroll in schools that have space for them. We identify schools that have Arabic language curriculum, or as needed, work with the government to build facilities that will allow these children to enter into school and also to ensure that they’re accredited once they’re finished, so if they go back to Syria or graduate high school here, it counts.

JL: What would you say to people who want to help?

JB: UNICEF has websites, such as our UNICEF Iraq Facebook page, where we do regular postings that give a face to the situation of children. We look at programmatic interventions, we look at what partners are doing and we often will put a link embedded where you can go to a page and make a personal donation.

Now this is a fine thing, but what we really need is for the donor communities to come together for a stronger support response. What motivates the donors? Typically it’s based on public sentiment, which influences the government and the budgetary agenda. So public opinion is very important, and that is why it is so important that the public realizes the extent and depth that the children in Iraq are suffering.

There are people here who are in starvation mode, there are children walking around wearing the clothes that they wore when they fled their home six months ago, and we don’t have the funds, or capacity, to get them what they need. So I would say to petition your government, to amplify our voice by sharing our stories.

For example, one small thing people could do is visit our UNICEF Iraq Facebook page, like our postings, and share them with people, so that the face of children becomes what people think about in this crisis. We can also show this to donors and the people in Iraq who follow these postings and who can take faith in knowing the world is watching and cares.

JL: Is there anything that gives you hope in your work?

JB: Aside from immediate life-saving interventions, which are so important but temporary, the things that give me hope personally are when you see children who are adapting, who have developed resilience, and who are beginning to give back to their communities. As they reach their adolescence, they take on leadership roles and give the younger people around them hope. When you see it, and you can work with these young children and see them growing into the prospect of a productive adulthood, then you feel like some of the things you’re doing, some of the investments you’re making, are paying off.