Contagious Content: The Role of Social Media in Global Health

Contagious Content: The Role of Social Media in Global Health

By Pascal Barollier, Director of Communications at the GAVI Alliance

At the end of January, we were taught a lesson in the power of social media in global health as a striking interactive map of vaccine preventable outbreaks since 2008 went, well, viral on Twitter.

By the middle of the week, more than 500,000 people had visited the map, and in an intriguing piece of research, the trail of tweets led all the way back to a post by our own CEO, Dr. Seth Berkley, from a few weeks earlier.

As gratifying as the origins of this post’s spread may be, the unusual success of this map begs an important question about the potential of using social media for communicating challenging global health issues like immunization. Are we making the most of its potential and huge reach?

With social media platforms like Twitter constantly overflowing with a tangle of questions, concerns, and misinformation surrounding vaccines, the rise of infographics and interactive visuals provides a unique opportunity for those with data to back vaccine effectiveness to more effectively communicate the evidence that can save lives and the dangers of the anti-vaccine stance.

And that online communities can respond so positively to this exercise in data sharing should give us hope for the future of communication surrounding public health measures. The digital world of social media is primed and ready to share and interact with meaningful and engaging data sets and case studies. The challenge now is to ensure that those with the evidence grant social media enough importance to translate it engagingly to digital platforms, thereby making the most of social media as a public information tool.

Below are some popular posts to get you up to speed with global health on social media over the past couple of months.

Bill Gates and Jimmy Fallon’s clip, confidently named “viral video”, was created to drive traffic to Gates’ Annual letter on global poverty and health– and it looks like the silly headwear did the job! 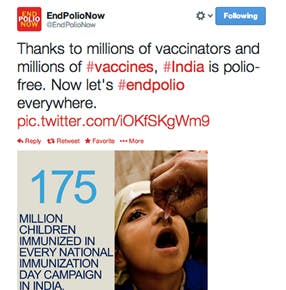 The official announcement of India’s “polio-free” status created quite a storm online, but Rotary’s simple infographic was one of the most shared pieces of content.

Weeks after the post started its life as viral content, CFR’s map of preventable disease outbreaks is still going strong:

GAVI’s own graph of vaccine introductions last year reached 90,000 people on Facebook at the end of 2013 – it didn’t quite go viral, but who knows who might share it in future? 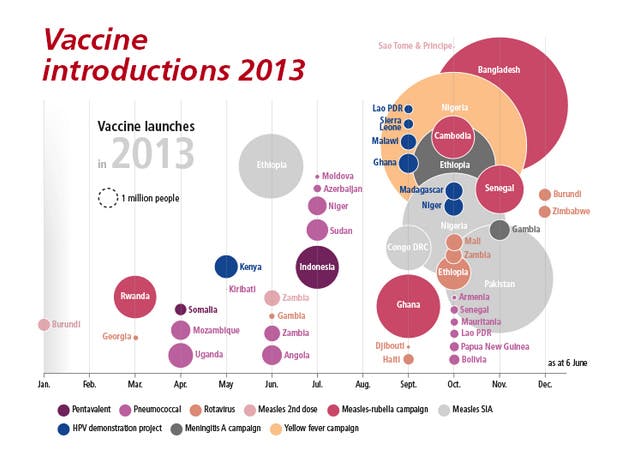 Pascal Barollier is Director of Communications at the GAVI Alliance. Prior to joining GAVI, Pascal headed the global external communications department at Sanofi Pasteur, authored several novels published in France, a screenplay that was the basis of a feature film “Aime Ton Père” starring Gérard and Guillaume Depardieu, and was also a former journalist at Agence France-Presse (AFP).