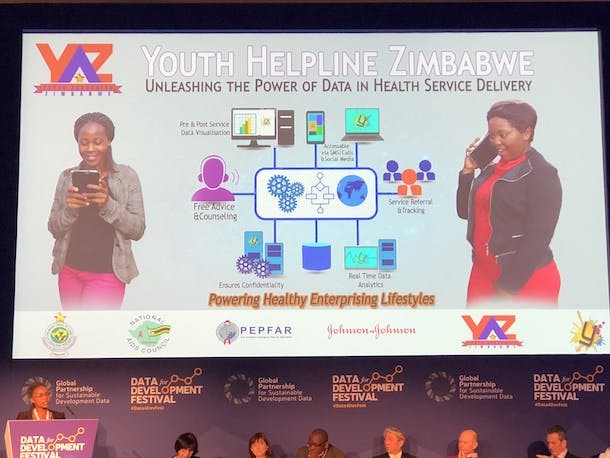 Siddarth tracks waste in Chennai; Derval forecasts disaster impact in Indonesia; and Tariro analyzes a health care helpline in Zimbabwe. Last week, at City Hall in Bristol, England, historic chambers echoed with the sound of the future, as scores of data scientists and advocates jostled to share their work at the first Data for Development Festival, hosted by the Global Partnership for Sustainable Development Data (GPSDD).

Everyone there got it: Good, actionable, and shared data, legally and transparently collected, can help deliver every single one of the 17 Sustainable Development Goals (SDGs). The projects I heard about are linked by this purpose but little else – and that’s ok.

“It’s hard to bring together governments, companies, NGOs, and individual people as they all have different perspectives,” said Claire Melamed, CEO of GPSDD. “What the Global Partnership – and the Festival – do are align people around the SDGs as a common set of objectives.”

At the Festival’s Innovation Showcase, I spoke with Siddharth Hande, founder and CEO of Kabadiwalla Connect, which aims to turn Chennai’s mountains of recyclable waste into better lives for the city’s scores of waste-pickers (mainly women). Right now, they scrape a living by sifting through trash at municipal landfill sites, selling plastics, cardboard, and discarded metals to small-scale aggregators, who in turn bundle recyclables and sell them on up the chain of the waste processing industry.

Siddharth gathers data from local businesses on what they throw away (for example, large numbers of plastic water bottles, or piles of cardboard from supply deliveries) and displays the information online so aggregators can see where to source trash that will fetch a higher price.

The idea is that waste pickers can collect higher-value trash, which makes them and the aggregators more money. Local authorities actually save money because they are picking up less waste from around the city.

The Kabadiwalla Connect project uses data to create value from waste – literally recover wasted value – which improves the lives of some of India’s poorest people.

A Voice in Policymaking

In Zimbabwe, meanwhile, technology and data are giving another overlooked group a voice in policymaking. At a data storytelling session, I spoke with Tariro Masaraure, monitoring and evaluation coordinator for Youth Advocates Zimbabwe, who analyses government health service delivery systems. In 20 of the country’s 62 districts, the government has been running a free SMS platform and mobile phone hotline to reach young people who have particular needs that often go unmet, including young women affected by gender-based violence.

Individual interviews with young people using the hotline revealed gaps in services. For example, Tariro told me, young people were put off using family planning services because nurses would ask questions like, “Why do you need family planning when you are only 16?” Data was collected across districts, showing that this was a repeated complaint. The findings were fed back up to service providers and the health ministry, which responded by adopting new global standards on youth-friendly services.

As Tariro put it, “Using data, young people were able to create demand-driven not supply-driven policies.” 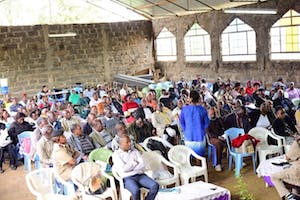 In Kenya, too, data has helped make the invisible visible. In Lanet Umoja, near Nairobi, the Open Institute, which runs community-level fact-based citizen engagement, took a slide projector and explained all 17 SDGs to a group of local people. The villagers decided to gather basic information about everyone in the region, so they could better understand their biggest problems. This way, they decided safe drinking water and a medical center were their greatest needs. They further decided that safe water was a problem they could ask NGOs for help with, while the medical center needed government action. So that’s what they demanded from their government representatives.

“Through data, they have gained the confidence to tell the politicians what they need and to understand, as voters, their power,” says founder Al Kags. The villagers got their medical center. Now they coach people in other parts of Kenya to collect their own data and use it to meet their needs.

A Primordial Soup of Data Science

There is little to connect these stories beyond their innovative use of data and technology, and there is little opportunity outside of data festivals like this and internet searches to connect them to similar projects so they might collaborate and grow. Like a primordial soup of data science, differently-beautiful things are evolving in multiple places and varied ways. Is that a problem?

As chair of the festival’s opening session, I asked my distinguished panelists how they would sum up the current moment in efforts to build a global ecosystem around data for development. We riffed on phrases like “The time for action is now” – but, really, when is the time for action on anything ever NOT now? We mused on the phrase “aligning for launch” as a way of describing how lots of different players are busy doing their own thing and coming together via the GPSDD to work more coherently together to really take off.

A delegate from the UK pulled me aside after the session and asked what everyone should be aligning around. The answer is simple: the SDGs. They are a globally agreed framework for progress, adopted by governments, and, as my encounters at the Data4Dev Festival showed me, embraced by non-profits, corporations, statisticians, and private citizens as a blueprint for people, planet, and prosperity.

“What does it mean to be working together on this stuff?” asked GPSDD’s CEO Claire Melamed, rhetorically. “It doesn’t mean everyone doing the same thing. It does mean understanding how all of the bits of the puzzle fit together. The SDGs are our coordination framework, our common objective. The Global Partnership is about making sure we are more than the sum of all our parts. That’s what we need to achieve the SDGs.”