How Colorado is Taking Action Against Human Trafficking

How Colorado is Taking Action Against Human Trafficking 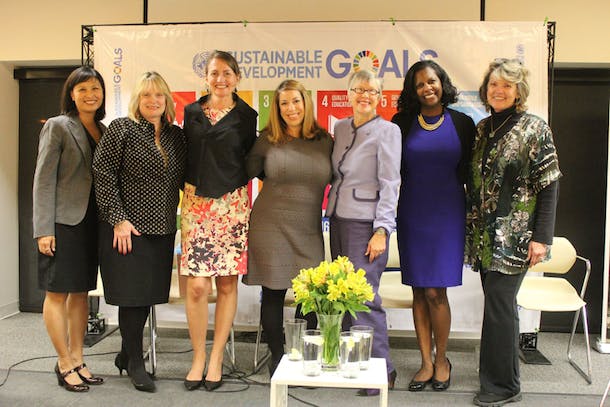 In honor of UN Day this year, the United Nations Association of the USA (UNA-USA)and its national network of Chapters hosted events across the U.S. honoring local champions of the Sustainable Development Goals. As part of this initiative, my local Chapter in Denver (UNA-Denver) held a special event focused on the work of advocates in Colorado addressing the terrors of human trafficking.

As Secretary-General António Guterres has said, “Human trafficking is all around us, in all regions of the world,” and this includes my own state of Colorado.

The panelists for our event included Colorado Attorney General Cynthia Coffman, who presented in 2017 to the UN’s Convention for the Right of the Child on Colorado’s legislation to prevent human trafficking. (In fact, Coffman was the only state official invited to participate in the Convention.) Attorney General Coffman discussed innovative state legislation aimed at combating sex and labor trafficking, which allows law enforcement to use electronic surveillance upon establishment of probable cause to monitor suspected traffickers. Attorney General Coffman shared how Coloradoans can become aware, educated, and involved in the prevention of human trafficking in our state.

Here are four key takeaways from the event on how Colorado is working to end human trafficking:

Colorado is leading the way in terms of creating legislation to address human trafficking. A new state law – driven by Attorney General Coffman – allows authorities to use wiretaps in sex and labor trafficking investigations, especially in situations where children may be unable or reluctant to come forward. Colorado has seen that this new policy assists law enforcement in acquiring evidence without having to put a traumatized victim on the witness stand.

“These folks hide the children that they are trafficking and the work that they are doing, and kids are vulnerable victims. They’re afraid to come forward and report, so if we can get a wiretap in a case where we suspect trafficking, we can get the words of the perpetrator. We can understand the intent – that this is exactly what they meant to do. They were trading children and sex, often times for drugs or for money, and it also sometimes alleviates the need for kids to be witnesses in these cases,” Coffman said.

The Colorado Human Trafficking Council is rolling out training programs in six Colorado counties, which cover both rural and urban settings. This training program is available to law enforcement, community members, and social service providers to better understand and prevent human trafficking and to help rehabilitate victims.

Spreading the word about resources

Several resources to address human trafficking were shared during the panel discussion, which included a hotline phone number that citizens can call to report suspected incidences of human trafficking. When audience members at the event asked what they can do to assist in the prevention of human trafficking, the number one suggestion was to call the hotline and to notify law enforcement. Since 2007, more than 2,000 calls have been made to the National Human Trafficking Hotline in Colorado.

Attorney General Coffman shared advice with the audience to promote healthy personal relationships in their own lives. She noted that when you are young and impressionable, understanding the elements of a healthy relationship can assist in navigating away from dangerous or unhealthy relationships and situations in the future. This advice hit home because there were several college-age young people in the audience.

Overall, UNA-Denver’s Human Trafficking event provided a space for the Colorado community to come together and discuss a global pandemic that touches every community, including our own. It also helped to promote the “Stand Up for Someone’s Rights” campaign of the UN Human Rights Office, which encourages individual action in support of human rights. By educating ourselves and opening our hearts to the needs of others, each of us can play a role in ending human trafficking.

To become a member of UNA-USA in your community, please visit unausa.org.

To mark the 16 Days of Activism to end gender-based violence, the UN Foundation blog is featuring a diverse chorus of voices against violence. Read posts by UN Women Executive Director Phumzile Mlambo-Ngcuka here. Support the UN Trust Fund to End Violence against Women here. The views expressed in guest blog posts are those of the guest author.