Christiana Figueres at the World Health Assembly: The Public Health Imperative to Act on Climate

Christiana Figueres at the World Health Assembly: The Public Health Imperative to Act on Climate 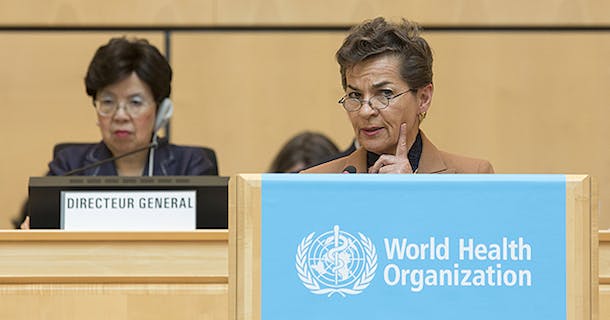 The 69th World Health Assembly, held last month in Switzerland, highlighted some of the world’s most pressing global health issues, including climate change – an issue that doesn’t always appear in global health conversations, but is directly linked to the health of people everywhere. Christiana Figueres, the United Nations Framework Convention on Climate Change (UNFCCC) Executive Secretary, addressed the assembly, devoting her discussion to the nexus between climate change and global health.

Figueres began her address by highlighting how the Paris climate agreement has broken several UN records: the most countries to convene to adopt an agreement, the most nations to agree to an international accord, and the most signatories to an international agreement in a single day. She urged the audience to help build on this momentum, which can improve global health.

Figueres also noted the intrinsic connection between climate change and the Sustainable Development Goals, noting that the goals on health and climate change “are so intimately related, they cannot be separated.” She remains optimistic that progress on the global goals for sustainable development will mean progress for climate targets, and vice versa. Now is the time for action that explicitly recognizes the health–climate nexus, she noted, urging that “the health community needs a climate agenda.”

In her closing, Figueres re-emphasized that we need urgent, ambitious action on climate change and called on the health community to continue to be advocates for climate action.

To learn more about the issues discussed at the World Health Assembly, read this blog post with our four key takeaways.