Change and Challenge Beyond the Headlines

Change and Challenge Beyond the Headlines 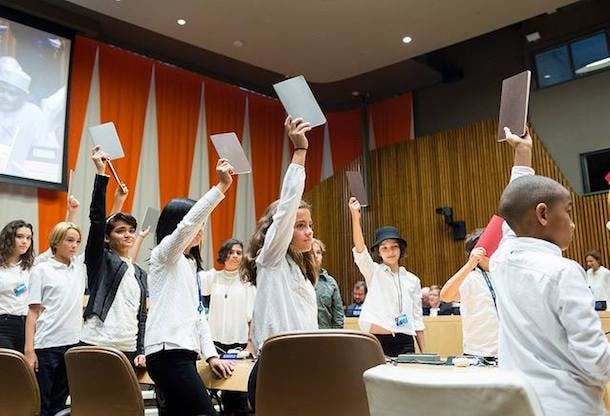 The start of the 72nd session of the United Nations General Assembly (UNGA) in September was a sobering reminder of the immense suffering taking place in our world; it was also a moment for the international community to come together and accelerate progress so no one is left behind.

Leaders gathered in New York amid enormous challenges, from the aftermath of relentless hurricanes in the Caribbean, to deep societal divisions and inequalities, to a growing humanitarian crisis in Myanmar and escalating tensions with North Korea.

While most of the headlines focused on breaking news and a few key issues and people, a number of important moments took place that deserve attention as well. These moments shoed both the serious challenges in front of us and the enormous opportunities we have to take action together to expand justice and opportunity.

Secretary-General issues clarion call for peace: In his first UN General Assembly as Secretary-General, António Guterres issued a call to action for the international community to move from “a world in pieces” to “a world at peace.” He also called for those gathered at UNGA to “act as one” and “fulfill the promise of the [UN] Charter and advance human dignity for all.”

Preventing conflict and unleashing a surge of diplomacy for peace were key themes for the Secretary-General, as they have been since the start of his tenure. In fact, he joined the World Bank President to launch a joint study on preventing conflict.

Raising awareness of humanitarian emergencies: The UN has continued to raise awareness of emergencies that world leaders should not ignore. The General Assembly agenda included discussions on the humanitarian crises in Yemen, Iraq, and Lake Chad; a meeting on the four looming famines that threaten 20 million people; and conversations on the surge of refugees fleeing extreme violence in Myanmar.

Grappling with extreme weather and climate change: For many nations represented at the UN, the General Assembly meeting was an urgent moment to discuss extreme weather events that have ravaged their communities and how the international community can rally to respond to these emergencies, support recovery plans, and build resilience for the future, including through climate action.

Protecting human rights: Next year, the Universal Declaration of Human Rights turns 70 years old, and human rights continues to be a cornerstone of the UN’s work. During UNGA, the Security Council approved an investigation to hold ISIL accountable for abuses in Iraq, and the UN Human Rights chief called for countries to outlaw discrimination against the LGBTI community.

SDG Implementation: From a new initiative of the UN and the European Union to stop violence against women, to the launch of a coalition to fight for equal pay, to a landmark pricing agreement to make HIV treatment more widely available, the global community took concrete steps toward the Sustainable Development Goals and a more just world.

To catalyze additional progress, partners including the UN Foundation launched consultations on a new benchmarking initiative to spark a sustainability “race to the top” for companies; the UN announced a 2018 summit on financing for the SDGs; and Senegal and France announced they will co-host a financing conference in 2018 for the Global Partnership for Education.

The UN and partners also leveraged the week to raise the alarm on challenges – including antimicrobial resistance, insufficient funding for education, and the need for Universal Health Coverage – that must be addressed to the SDGs.

Acting on climate: The annual climate week took place at the same time as the General Assembly, bringing climate advocates to New York to rally for climate action. The leaders of the UN and the World Bank announced a new initiative, Invest4Climate, to increasing financing for climate action. In addition, California Governor Jerry Brown announced the co-chairs – including UNFCCC Executive Secretary Patricia Espinosa – for the Global Climate Action Summit in September 2018.

Growing engagement: Increasingly, the UN General Assembly has become a gathering place not just for diplomats, but for anyone invested in a stronger, healthier, more just world. A number of new events (such as We the Future, the Hult Prize, and Gates Goalkeepers) and a range of stakeholders (such as Bloomberg Philanthropies, the World Economic Forum, and the Business Commission) joined “Global Goals Week,” which coincided with UNGA and featured civil society actors and private sector leaders discussing SDG and climate action.

These issues and many others were on the agenda, underscoring the important role of the UN as the convener for “We the peoples” of the world to build understanding, exchange words and ideas, find common ground, and launch action on the issues that no one nation can solve alone. While UNGA featured many important discussions and initiatives, the work to advance progress will continue throughout the year.

In an era of division, inequality, and suffering – where millions of people are shut out of global progress and denied a life of dignity – we must rise to meet this challenge. We cannot do it by backing away from international engagement; instead, we must embrace partnership to reach the world we want.