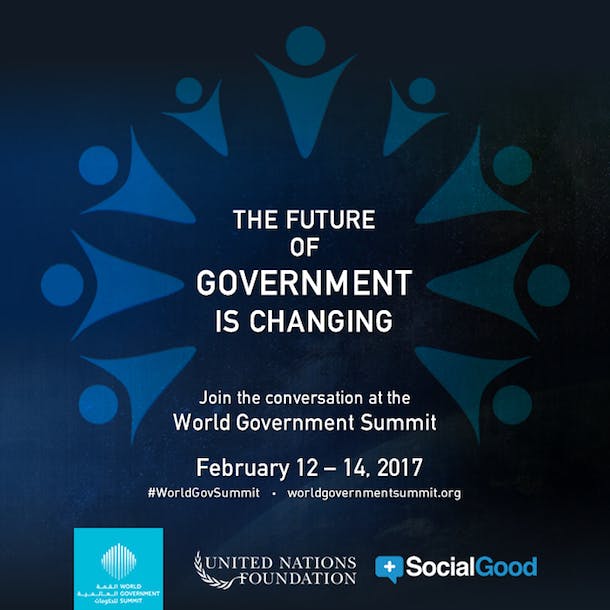 Public service is in my blood. While in most homes politics is taboo, I grew up with a heavy dose of political conversation, in part thanks to my grandfather. A lawyer by training, he founded one of Puerto Rico’s political parties and went on to serve as Senator and Mayor of the second largest city. After retiring, he remained an Ombudsman; until his death, his home was always open for every citizen in need of an advocate.

I know the passion that those in public service, like my grandfather, have for making their communities a better place. Thus, with trust in government and public institutions eroding globally, it’s more important than ever for world governments to innovate and improve public systems to better service their citizens in the 21st century. Public servants work tirelessly for the erstwhile common good, and it’s becoming increasingly necessary for open dialogue and collaboration between governments and citizens so that we can solve problems together.

There are many examples where citizens have become active partners in solutions together with governments. Many examples already exist, such as Meghan Smith, who left from leading Google X to become the U.S. Chief Technology Officer under the Obama Administration. Her goals included disrupting the federal government through technology and building the U.S. Digital Service. Or the Gov platform in France where citizens can directly vote on specific political initiatives. And there are so many more great initiatives globally. I am ready to take a peek at this possible future during my participation at the upcoming World Government Summit in Dubai.

Hosted by the UAE from February 12-14, the summit is the largest gathering of governments, international organizations, and thought leaders. With participants from over 130 countries, the dialogue aims to shape the future of governments and help improve the lives of citizens worldwide.

I am particularly looking forward to see two important pieces of the agenda: The global goals and the role of happiness in policy.

Global goals in action: In September 2015, the United Nations adopted the Sustainable Development Goals. Also known as the global goals, this is a 17-point shared agenda addressing all major areas of global improvement by 2030. Through a special track, SDGs in Action, the World Government Summit will explore the role of science, technology, and innovation in achieving the goals.

While technically science and technology are agnostic, arguably in some areas, like climate change, some of our great scientific advances are as well its root cause. This is why for me the “innovation” part brings the exciting alchemy; how do we put science and technology truly at the service of the world? This takes a deep, personal commitment from all players to take a creative leap of faith into before unimaginable systems and paradigms. I’m sure I’m in for a great positive surprise at this track.

Global Dialogue for Happiness: This dialogue is hosted by my fellow member of the UN Foundation Global Entrepreneurs Council, H.E. Ohood Bint Khalfan Al Roumi, Minister of State for Happiness of the UAE (the BEST title ever). The dialogue includes world-renowned experts on happiness and government officials working to promote happiness. These sessions delve into the essentials of happiness – from its history to the genetic factors, all the way to the metrics of happiness as the new GDP.

The pursuit of happiness is enshrined in the U.S. Declaration of Independence. Isn’t it about time for governments and business leaders to take it seriously as an element in their own work? I welcome exploring diverse ideas about how to mainstream this essential human quality into global policy decisions.

Before we throw the proverbial baby out with the water, it’s imperative we acknowledge the invaluable services that only governments can provide to ensure all citizens thrive. With an openness to collaboration, disruption, and sharing innovation and best practices from its citizens, countries will thrive and we will undoubtedly achieve the global goals.