By Michelle Milford Morse on October 6, 2021 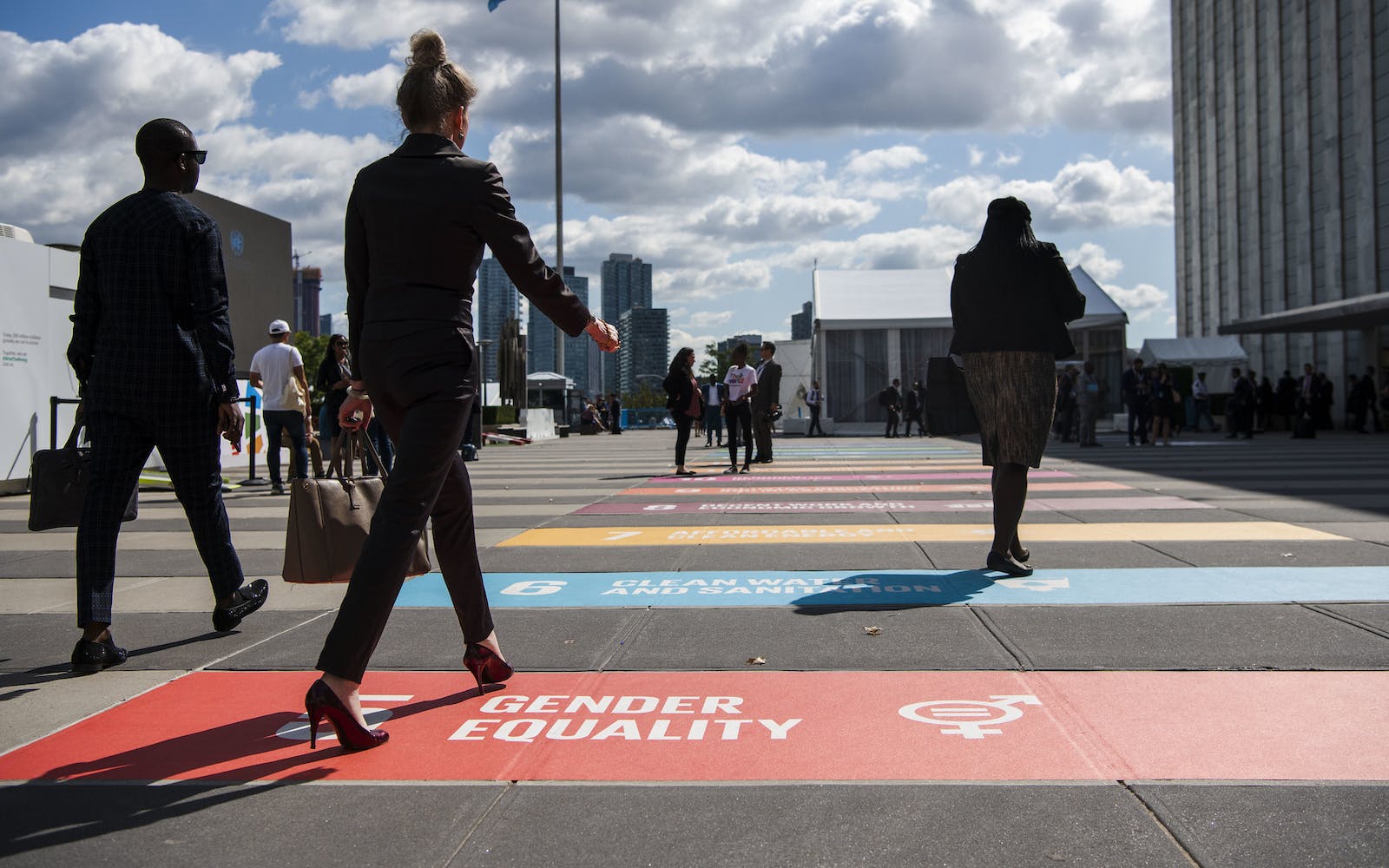 The UN Foundation’s Vice President for Girls and Women Strategy offers an insider’s look at how feminists across the globe joined forces at this year’s UN General Assembly — and why this is a pivotal moment in history and the pandemic recovery.

Imagine a small group of feminists and gender equality advocates gathered around outdoor tables and under tents, learning how to sit next to and talk to other humans again. I was in New York City, a trip timed to coincide with the 76th UN General Assembly, and very happy and lucky to be among them — a grinning if self-conscious beneficiary of lopsided and unjust vaccine distribution and a U.S. citizen allowed to show up from my home state of Texas.

We were grateful for the camaraderie, the space and time to coordinate advocacy plans, and for the tents in particular given the pouring rain.

It was an unusual UNGA, one starved of the usual parades of global civil society advocates (my favorite part), the protesters and their posters, the abundant motorcades (my least favorite part), and the noisy, crowded events.

The general noise was lower. The stakes were as high as ever. UN Secretary-General António Guterres named gender inequality one of the six great divides that prevent us from achieving progress and peace. During the landmark SDG Moment to promote the Sustainable Development Goals, he declared again what we all know to be true: “We cannot achieve any of the SDGs without gender equality.” The Secretary-General called for investing in girls’ education, dismantling harmful power structures that lead to discrimination and violence against women, and ensuring women’s full and equal participation in all facets of society — giving voice to a list of global imperatives that existed before the pandemic and has become more urgent in its path. In fact, the World Economic Forum reported in March that the pandemic pushed back gender parity by a generation.

What’s a world to do? Push in the other direction.

The Generation Equality Forum (GEF) gave our movement collective lift and life for that task. Convened by UN Women and co-hosted by the governments of France and Mexico, the GEF equipped us with a new multistakeholder model for advancing gender equality and a record-setting $40 billion in commitments from a broad range of partners. Indeed, national governments, private companies, philanthropic organizations, civil society, and UN agencies are lined up to push back against inequality and fight for a fairer and freer future. The GEF also put forth a Global Acceleration Plan to tackle the growing challenges to women’s rights and equality head-on and set an ambitious vision for the future.

So, we have a team and a target. We have a plan. What has changed and comes next? UNGA offered the opportunity to listen closely to colleagues at the UN and UN Women and activists and allies of all kinds. It also offered a chance to hear from world leaders in the General Assembly Hall. The listening and watching revealed two GEF strategies we must keep, and one stubborn habit we should ditch.

Amp Up the Ambition

There has long been a gender equality funding gap, and gender equality has remained stubbornly low on the list of global funding priorities for decades. In the U.S., organizations devoted to the rights and needs of girls and women received only 1.6% of charitable giving in 2017. Other research reveals similar global trends.

Thus, a $40 billion day is not the kind of thing feminists are used to. It’s truly great. It’s also not enough. Indeed, it’s less than half of the net sales of the world’s leading candy companies — in 2020 alone. Now, I’ll challenge you to a foot race for a piece of chocolate, but nonetheless it is important to put $40 billion in context. The world can and must offer more to advance the rights, health, safety, and opportunities of half the world’s population.

And what we do with this momentum and new infusion of cash is equally important. The philanthropic sector committed $4.2 billion at the GEF, which could dramatically improve the operations and capacity of girls’ and women’s organizations with the most urgent funding needs. The private sector pledged $17.5 billion, with commitments to advance equality in their workforces, supply chains, and communities. The Government of Mexico and UN Women launched the Global Alliance for Care, while the United States and Canada made additional investments related to the care economy.

But there’s much more to do, with funding needs left unaddressed and investors on the sidelines. So, while the GEF represented a tide shift in funding for gender equality, the $40 billion investment it earned must be the floor, not the ceiling.

If a movement needs cash, it also needs infrastructure — leadership, a diverse array of actors, bridges to connect them, and a clear approach to keeping everyone on task and on track.

First, the GEF process must be centralized and mainstreamed in UN Women’s work going forward to ensure that this movement has a strong and skilled engine behind it. The UN Women GEF team pioneered an approach to global multistakeholder advocacy, against all odds and during a pandemic. Now, the GEF process must be elevated, integrated, and coordinated with other gender equality accountability moments, and present in all the multilateral moments. The newly appointed Executive Director of UN Women, Sima Sami Bahous of Jordan, will play a particularly critical role in driving the GEF process forward and has lent strong support for GEF thus far.

Second, the GEF tent is big enough to shelter us all. Let’s welcome everyone in. For too long gender equality has been seen as the problem that can wait, the problem that is someone else’s to fix. The achievement of gender equality would be great for everyone, so it shouldn’t be a project for only some of us. It’s not too late to get in the game, and the bigger the team the better.

Third, we need to build and maintain bridges — a necessary infrastructure for any movement — so we can drive faster and farther on the road to equality. This means building durable, operational trust between Member States and civil society; between grassroots leaders and the private sector; between young leaders and movement elders.

Finally, we need a path toward action and accountability. UN Women has begun to develop an accountability framework and has rightly promised that its conceptualization and implementation will benefit from the views and expertise of everyone, particularly grassroots and marginalized girls and women. Meanwhile, commitment-makers now have the opportunity, and the obligation, to continue to engage in the GEF process — participating in the design and formation of accountability plans, tracking progress, and co-implementing and co-learning with others during this five-year process.

Power, Participation, and the Podium

For an UNGA that was so unfamiliar and unusual in so many ways, it was annoying to see the persistence of one particularly bad habit. While the General Debate began on Tuesday, it was not until Wednesday that a woman appeared at the podium. Fifty-one men spoke before we heard from President Zuzana Caputova of Slovakia.

There are 193 UN Member States of the UN. Only 13 women came to the podium to represent their country. On the world’s biggest and most consequential stage in the world, less than 10% of the speakers represented 50% of the world’s population.

Or, as Estonia’s President, Kersti Kaljulaid, put it, “There can be no democracy, no security, and no development without one-half of the humankind.”

These speeches also gave voice to a collective and antiquated view of what is often seen as women’s work.

"here can be no democracy, no security, and no development without one-half of the humankind."

Samia Suluhu Hassan, the President of Tanzania, said, “As the first female president in the history of my country, the burden of expectation to deliver gender equality is heavier on my shoulder.” Why? There are enough of us to carry it with her. President Hassan’s word reinforce a core principle in the GEF Acceleration Plan: the explicit and intentional redistribution of power and responsibility.

The women who did speak left me wanting to hear more.

Jacinda Ardern, Prime Minister of New Zealand, the first country in the world to grant women the right to vote, gave us a powerful view into what might be possible in every corner of the globe. “It seems surprising that in this modern age we have to recommit ourselves to gender equality, but we do. As a girl I never ever grew up believing that my gender would stand in the way of me achieving whatever I wanted to in life. I am, after all, not the first, but the third female Prime Minister of New Zealand.”

If I were put in charge of the lineup, I’d ditch the old protocols and put Prime Minister Mia Mottley of Barbados first, so her courage, moral clarity, and compassion could set the tone.

"We cannot solve every problem of the world, but we must solve those within our purview immediately."

Invoking Bob Marley and humanity’s capacity to innovate — from lunar travel to male baldness — Ms. Mottley said, “We cannot solve every problem of the world, but we must solve those within our purview immediately.”

I agree, Madam Prime Minister. And gender inequality is within our purview. We can and should solve it immediately.