Americans in the UN: Making a Difference for Families in Need – From the U.S. Government to the UN

Americans in the UN: Making a Difference for Families in Need – From the U.S. Government to the UN 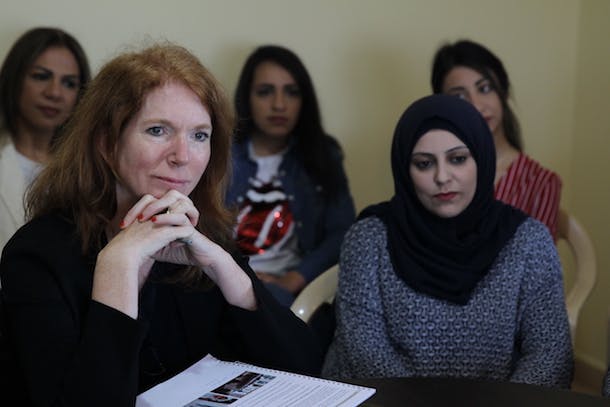 As part of our “Americans in the UN” project to share the stories of Americans who work for the United Nations, we connected with Sarah Poole, the Deputy Director of UN Development Programme’s Regional Bureau for Arab States.

Poole began her career with the U.S Agency for International Development and the U.S. Department of State on issues related to overseas humanitarian response, crisis recovery, and refugees. She has served the UN Development Programme (UNDP) since 1999 in numerous positions at its headquarters in New York and overseas, in countries affected by crisis and longer-term development contexts.

Originally from West Chicago, Illinois, she earned a Bachelor’s degree in Political Science from the University of Michigan in Ann Arbor and a Masters in Government from the London School of Economics and Political Science.

Below please find excerpts from the interview, which have been edited for context and clarity.

Sarah Poole: A sense of common purpose. I grew up in a very small town in the middle of the United States, and I find so many similarities between what we aspire for ourselves, for our families, and for our children, with the goals and hopes of communities and people living in other countries around the world.

I am compelled by the day-to-day work that we do and the impact that it makes. At the end of the day, we’re all people. We want education, we want safety for our children, we want jobs, we want as women to be empowered, and we want to know there is hope for the future.

What is your message to Americans about the importance of the UN?

SP: I think we hear so often, “If the UN did not exist, we would need to create it.” I know that might sound trite on the one hand, but as an American working for the UN, I do feel that it’s true.

The UN really is the place where all countries come together. This day and age, it is a very important platform for dialogue, for engagement, for cooperation, and for understanding.

If you also look at the UN’s programming and what UN agencies are actually delivering on the ground, it is very much around a shared vision, a shared purpose of what we as Americans want…. In my experience, the UN really does contribute to making the world a better place.

SP: My first experience with the UN was by trick-or-treating with the famous UNICEF box on Halloween. It was something that bonded my generation. It was universal. We knew there was something called “the UN,” and that it helped support children and families living around the world.

How did you end up working for the UN?

SP: After graduating, I had the opportunity to start my career working for USAID and later for the State Department Bureau for Population, Refugees, and Migration. These positions led me overseas, to Rwanda, Burundi and then Bosnia.

At the time, many of my counterparts were the UN agencies and people working for the UN. It was such an inspiration for me not only to be able to serve my own country by working through the U.S. government to provide assistance, but also to be part of a wider international and multilateral support system for communities in countries that were coming out of conflict.

I later joined the UN Development Programme (UNDP) in 1999, originally thinking that this was an important way to gather international experience, multilateral experience. It’s been 20 years since!

What is the favorite part of your job?