When global leaders gather in New York later this year to address the climate crisis, they need to do more than give speeches. That’s the message from the person tasked by the Secretary-General to make September’s major United Nations Climate Summit a real breakthrough moment. Special Envoy Ambassador Luis Alfonso de Alba hopes powerful decision makers from all sectors will go beyond re-stating commitments already made, including under the Paris Agreement. The challenge he is posing to everyone, from governments to individual citizens, is to aim higher.

“The summit is not the place to come and tell us what everybody’s doing,” he told me. “It is a place in which we hope that the different actors will come together and commit to more ambitious development.”

Recently I had the opportunity to sit down with the Special Envoy, to get a sense from him of what needs to be done to fight climate change and what to expect at the September Climate Summit. Our conversation, below, has been edited for length and clarity. The video of the interview, done for the UN’s #SDGLive channel, can be seen here:

Luis Alfonso de Alba: The main purpose of the summit is to raise ambition to a level that will allow us to keep the increasing temperature below 1.5 degrees. And to do that we need to do a lot of things, and we need to do it together. So my job is to encourage action by governments, by the private sector, by local authorities, and by the public in general to support the policies and actions that will allow us to obtain that goal.

Rajesh Mirchandani: And when you say, “encourage” it’s more than encourage, isn’t it? It’s urging because of the urgency of the situation.

LAdeA: Yes, it is an urgent situation. But we are also very much hopeful because we need to signal the urgency and at the same time signal the ways in which we can achieve the goals. There are many developments which are positive and certainly it’s going to take a great effort by many, many actors, but it can be done and that’s something which is quite important at the summit, that we do not only sound the alarm, but show the way forward.

RM: Climate is not only one of the Sustainable Development Goals (SDGs), but it underpins them as well. We know we can’t reach the SDGs if we don’t make progress on climate action, and we are off-track. But you remain hopeful? Where do you see signs of hope?

LAdeA: It’s very important to achieve all the goals…but the climate itself should not be considered an environmental issue. If we want to fight climate change, we need to change the ways we produce and consume, and in doing so, we are changing the model of development of the society as a whole. We need all parts of government, not only Ministries of Environment. But we also need new partnerships with the different stakeholders.

I think we need to recognize that the political will has diminished to some extent, but at the same time, we are hopeful because we see a lot of developments, particularly on technology and pressures that are being found by society as a whole. New actors that are taking the lead. It has become an issue of concern for everybody.

RM: And there seems to have been a groundswell in sub-national action: action at the level of authorities below national governments, and it’s also matched by polling that shows that this is a huge issue for publics around the world, specifically young people.

LAdeA: Yes, the support and the pressure by public opinion in general – and I would say particularly by young people – is critical. They have understood already that this is probably the biggest challenge of our time and we need to act.

RM: Let’s cast our minds forward to September. What would success look like for you coming out of the Climate Summit?

LAdeA: As you know, in Paris, governments have agreed to present their nationally determined contributions, which is a commitment to reduce emissions and to tackle other issues including adaptation. And those commitments need to be fulfilled, but they also need to be enhanced or increased substantially.

To do that, we need to identify very concrete actions. The summit is not the place to come and tell us what everybody’s doing. It is a place in which we hope that the different actors will come together and commit to more ambitious development – concrete proposals. We are not aiming at having a huge list, but a few proposals that could have transformational impact, that will inspire other actors to follow, and which could be replicated by some industries and governments. This is the kind of event we are aiming at. It is not a pledging conference. It is not a speech that we are hoping to get at the UN. It’s the building of coalitions of different actors committing to act.

RM: Why do you think the UN is the right forum for this?

LAdeA: Precisely because the UN has the convening capacity to bring all those actors together and commit to a series of actions, a plan. It can make the necessary connections. If you are looking into the question of resilience, if you do not link that to the question of finance, it will not work. And if you do not get all the actors, in this case the development banks and private resources, together with public resources, cities, working together with national governments, et cetera, you will not be able to achieve the results.

It is a task that requires the participation of many actors, governmental and non-governmental, and the UN is the only place we have where they can convene and agree.

LAdeA: Well, I think there are many actions that we can take individually. Each of us can contribute by the way we consume and the way we conserve products. But we also need to put pressure on our leaders to take the necessary policies or steps that are needed for society as a whole to be on a path which is sustainable. So, it’s a double effort that we need to do. 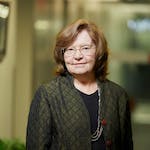