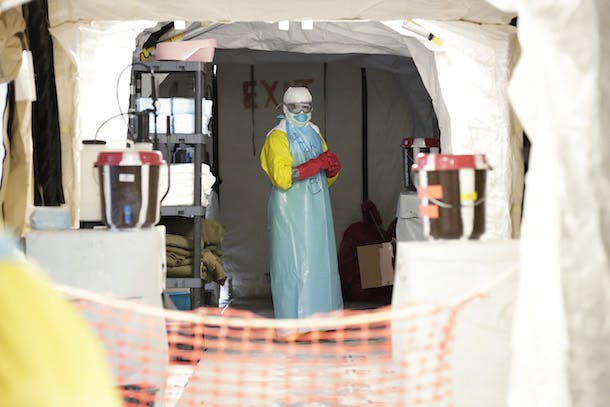 Four years ago, the deadly Ebola virus surged through the West African countries of Liberia, Guinea, and Sierra Leone, killing more than 11,000 people in the region and devastating the economies of these countries. At the time, there were concerns over the spread of Ebola as the news reported that two American health care workers in Liberia had contracted the disease and were being airlifted to the U.S. for treatment.

Fast-forward four years, and I found myself in Monrovia, Liberia, sitting across from the two American Ebola survivors who had been previously airlifted out of the country – Nancy Writebol and Dr. Rick Sacra.

Nancy and Rick are true heroes, along with the many local front line health workers who courageously cared for patients – some of whom lost their lives. After surviving their exposure to this deadly disease, Nancy and Rick returned to the same hospital in Liberia where they continue to work to provide basic health care services to the Liberian people.

As we toured the hospital, Nancy and Rick explained that the there was room for optimism. Four years after the deadly outbreak, they said that Liberia and the surrounding region are now much better prepared for future outbreaks.

The region was put to the test in 2016, where a second Ebola outbreak in Liberia infected 16 people and killed nine individuals – a dramatic difference from the devastation caused by the disease just two years before.

What accounts for this change? Nancy and Rick credit the unprecedented partnership among the governments in the region; the UN’s World Health Organization (WHO) and other UN agencies; and the U.S. Centers for Disease Control and Prevention, the U.S. Agency for International Development, and other U.S. agencies.

These important actors were guided in their innovative work by the Global Health Security Agenda, a partnership of nations, international organizations, and stakeholders dedicated to creating a world safe from infectious disease threats, as well as a commitment to improve Liberia’s primary health care system.

Health access for all “and health emergencies are cousins – two sides of the same coin,” says WHO Director-General Dr. Tedros Adhanom Ghebreyesus.

Today, the organizations responsible for stopping the next infectious disease outbreak now work as a team and have a common language for talking about their shared efforts – an important improvement from the fractured infrastructure network that existed in 2014.

In short, global health leaders have accepted that diseases don’t know borders and partnerships at every level are necessary to protect our collective health security.

“Strengthening health systems is the best way to safeguard against health crises,” Dr. Tedros has said. “Outbreaks are inevitable, but epidemics are not. Strong health systems are our best defense to prevent disease outbreaks from becoming epidemics.”

Collectively, local health leaders have focused intently on improving the public health surveillance systems in West Africa so that outbreaks can be detected and stopped as quickly as possible.

– The capabilities of laboratories in the region to test blood samples have been boosted dramatically – meaning that doctors and nurses can know much sooner as to whether a patient has contracted Ebola or another infectious disease.

– The skills and capacities of doctors, nurses, and other public health professionals in the region have also been strengthened.

– They have established an emergency operations center in each country capable of effective coordination of response.

We are already seeing important results. Not only was the 2016 Ebola outbreak quickly contained, but this newly coordinated and energized team has already won impressive victories against outbreaks of Lassa Fever and meningitis.

Those who do not learn from history are doomed to repeat it. Having just returned from Liberia, I’m pleased to see that the regional and global players working on preventing the spread of infectious diseases in West Africa have made leaps to collaborate and enhance health systems while protecting our collective global health security. These are U.S. taxpayer dollars well spent.