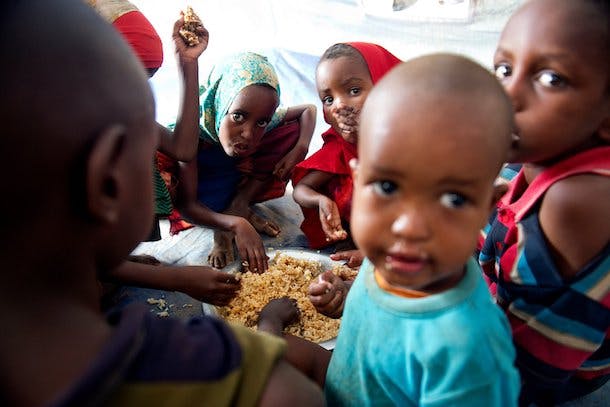 On Tuesday, a subcommittee of the U.S. Senate Committee on Foreign Relations will convene for a hearing on the four looming famines, which United Nations agencies regard as one of the worst humanitarian emergencies since World War II. A recent poll from the International Rescue Committee found that only 15% of Americans knew about this crisis, but once they learned about it, 73% expressed concern.

Over 20 million people in Yemen, Somalia, Nigeria, and South Sudan are at the brink of famine, including 1.4 million children at risk of death from acute malnutrition. Conflict and insecurity in these countries has both contributed to the emergencies and has impeded efforts by the UN and its partners to deliver life-saving assistance.

The UN Office for the Coordination of Humanitarian Affairs (OCHA) has stated that $4.9 billion is needed to respond to the threat of famine, but less than half of those funds have been received. These funds are essential to saving lives and will help more people get food assistance, treat malnutrition, fight disease through oral rehydration and vaccines, and provide water, sanitation, and hygiene services.

Humanitarian aid saves lives, and individuals can support this work by raising awareness and donating fund at: http://interactive.unocha.org/emergency/2017_famine/donate/

As OCHA says, “Allowing famine to unfold is a choice; we must choose to stop it.”

The UN and humanitarian partners are working to deliver life-saving resources to those most in need, despite key challenges posed by protracted conflict and funding shortfalls.

UN agencies including OCHA, the World Food Programme (WFP), the Food and Agriculture Programme (FAO), the UN Refugee Agency (UNHCR), and the UN Children’s Fund (UNICEF) are actively working to protect the livelihoods of those most at risk, providing food aid, medical treatment, protection against disease, agricultural support, shelter, and other essential aid.

For example, WFP delivers critical food and medical supplies through a system of local offices, air services warehouses, and distribution routes to the hardest to reach areas. In one month alone, WFP delivered food and nutrition assistance to more than 8 million people in Nigeria, South Sudan, Somalia, and Yemen.

FAO is working on emergency relief efforts that will reinforce the livelihoods of the most vulnerable by supporting agriculture activities, as 80% of the affected populations rely on agriculture. The organization provides cash payments to rural families, saving vital livestock through veterinary treatment, and delivering crops and seeds to farmers during growing seasons. In Yemen, FAO provides dairy kits to improve child nutrition, while in South Sudan fishing kits provide a life-saving tool for families to obtain food.

To learn more about WFP’s response to the looming famines, click here.

To learn more about OCHA’s response to the looming famines, click here.

To learn more about FAO’s response to the looming famines, click here.

To learn more about UNICEF’s response to the looming famines, click here.

According to OCHA, Nigeria is facing a mounting risk of famine with the Borno, Adamawa, and Yobe states most affected due to on-going conflict leading to widespread displacement. A combination of diminishing agriculture production, limited farmland availability, and climate conditions have left 5.2 million people across the country in severe food insecurity with nearly half a million children are acutely malnourished.

Ongoing conflict in the country has led to massive displacement, a disturbance of food production, and rising prices for food. Although the UN declared an end to famine conditions in the country, famine could soon be a reality again as severe food insecurity persists throughout the country. Over a quarter of South Sudanese children risk death from malnutrition and access constraints continue to impede on efforts to deliver life-saving aid to vulnerable children.

According to the FAO, consecutive poor harvests due to severe drought in the region have aggravated the food crisis, particularly in rural areas which compose of 68% of those at risk. More than 3 million in Somalia are in urgent need of food assistance. Below-average rainfall raises the likelihood of reduced harvest in July according to FAO.

Conflict has devastated the country and disrupted the importation of food. Nearly 7 million people are in immediate need as Yemen faces the largest food insecurity emergency in the world. Half a million children in the country suffer from acute malnutrition, increasing their vulnerability to disease outbreaks, according to UNICEF. As resources become increasingly constrained due to the rampant spread of cholera in the region, mobilization of funding and resources is crucial. FAO’s July 2017 situation report states that summer season production will likely fall short due to poor rains, inaccessible farmlands, and high cost of inputs.

How you can help

Become an advocate and raise awareness for the hunger emergencies that are afflicting millions worldwide. With famine looming in these four countries, global action is critical to rally support for immediate relief efforts, expanded access to deliver aid, and lasting solutions for peace.

Famine interventions will fall short without adequate funding. Financial contributions will help the UN meet the needs of millions at risk of death from starvation.

You can contribute to OCHA’s country funds for Nigeria, South Sudan, Somalia, and Yemen by following the links below: