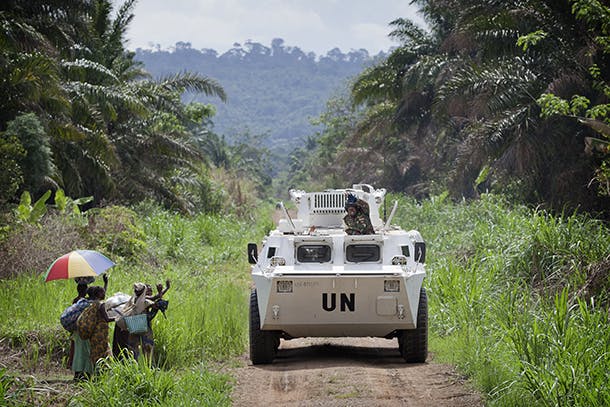 Kids of all ages lined up on the dirt road as our minibus pulled into the Internally Displaced Persons camp in Kitchanga, all wanting to give us fist bumps and high fives. We had just arrived in this town in the Democratic Republic of Congo in a heavily-used, Soviet-era helicopter used by the United Nations. The entire town came out to meet with us.

Their message was clear: ensuring that the UN Peacekeepers guarding Kitchanga from armed militias didn’t pull out. “There are armed groups in the hills above the camp, and the minute the peacekeepers leave, we will be at their mercy,” one person said.

Based on what’s happened over the past decade in the North Kivu province in which Kitchanga is located, they have reason to be terrified. Armed groups fighting against the Congolese government routinely raid villages, steal children to become child soldiers, assault women, and take anything that’s not tied down.

In fact, it was precisely such raids that drove thousands of people to flee to the Kitchanga camp seven years ago, and the UN to place a contingent of UN peacekeepers from Uruguay on a high nearby hilltop. Yet the violence continues. The day before our arrival, armed groups had attacked villages 10 kilometers away. Camp elders told us, “We know that those who survived will be arriving tomorrow.”

Life in the camp is rough. Residents are “guests” of the nearby town, and as a result, don’t have access to arable land to farm. Only 14% of the kids inside the camp go to school because the rest cannot afford school fees. One woman reported that moms frequently resorted to prostitution when there was no money to feed their kids.

At the same time, nonprofits like Médecins Sans Frontières (MSF) were working with local authorities to ensure that children got their immunizations against polio, measles, and pneumonia. A dad also reported that families slept under bed nets to reduce the chances of getting malaria.

The residents were quite clear that, until they could go back to their home villages, they needed the UN peacekeepers there to protect them.  The UN is making slow progress in beating back the armed groups that cause endless violence in eastern Congo, but the harsh truth is that it will likely be several years before camp residents will feel it’s safe to return to their homes and get out of camp life.

We had lunch with the Uruguayan peacekeepers, and as dads and moms themselves, they find it rewarding to play a role in keeping the peace. I’m thankful that the U.S. continues to do its part to support this important UN mission by paying our UN dues on time and in full.

To learn more about the UN Mission in the Democratic Republic of Congo, visit the Better World Campaign website.