A Polio Survivor’s Message to the World

A Polio Survivor’s Message to the World 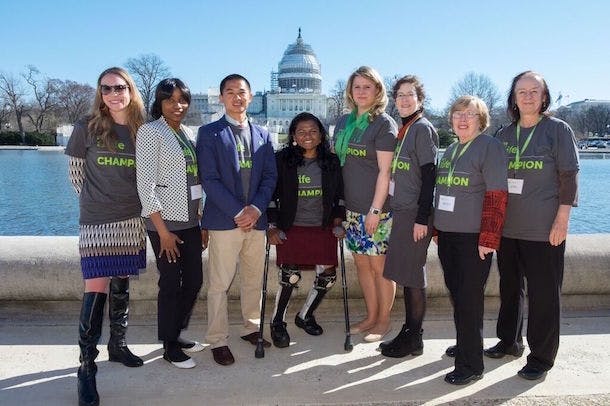 As an infant in India, Minda Dentler contracted polio, which resulted in the paralysis of her legs. She has never let the disease slow her down though: She is a triathlete, a mother, and a Champion for the United Nations Foundation’s Shot@Life campaign, which supports the work of the United Nations to provide access to vaccines for children around the world.

Dentler was recently in Washington, D.C. for the Shot@Life Champion Summit, where I had the opportunity to ask her a few questions.

Jenni Lee: As a polio survivor and advocate, what is your message to the world on polio?

Minda Dentler: Polio is still a very real threat, especially in the poorest communities of the world. But we are so close to ending this terrible disease forever, and we need to keep the momentum to make that happen.

JL: What is your advice to someone who wants to get involved in the fight against polio?

MD: There are so many organizations that have been instrumental in the worldwide fight against polio. I would encourage people to go to the website of the UN Foundation’s Shot at Life campaign – http://www.shotatlife.org – to learn more about vaccine preventable diseases like polio and how you can become a Champion or advocate and lend your voice to the cause.

JL: What is the best piece of life advice you’ve ever received?

MD: Follow your passion and don’t be afraid to take risks. The best things that have happened to me have come from being willing to take risks.

JL: What gives you hope that we can beat polio?

MD: That India, the country of my birth, has eradicated polio. For years, you would hear that India couldn’t get rid of polio; there were too many obstacles to overcome to make that possible. But India’s been polio-free for four years. That gives me hope that we are closer than ever to eliminating polio everywhere in the world.

JL: As a mother, what do you hope for children around the world?

MD: I want all children of the world, no matter their circumstances, to have a real chance at a healthy life. Every year, 1.7 million children die unnecessarily from preventable diseases. One in five children globally do not have access to vaccines. Children who have not been vaccinated and are infected with preventable diseases, such as polio, can face a lifetime of hardship and even death.

The day my child received her first round of childhood vaccines was unexpectedly emotional for me. I spend hours after thinking of all the ways her life would be different from mine because of this one thing – she would not ever have to plan ways to work around access limitations, she won’t face years of surgery to gain mobility, she would be able to run and play! No should have to live with paralysis by polio especially when the disease is preventable with a vaccine.

I want all children to have access to vaccines. It is one of most critical and successful ways to protect their health.

JL: Where would we be in the fight against polio without the efforts of everyday citizens?

MD: We would not be on the cusp of eliminating polio worldwide. Plain and simple. Everyday citizens can do so much:

– Those of us who are parents can choose to immunize their own children and advocate for global vaccines.

– We can influence governments and NGOs to fund global immunization programs.

– We can mobilize and participate in worldwide immunization day efforts.

– We can call for protection of health care workers who are trying to eliminate polio through providing vaccines in places like Pakistan.

TAKE ACTION: You can help get rid of polio and protect children from this debilitating disease. Join the movement at shotatlife.org.