A Pledge for Gavi Means a Healthier Future for Children Everywhere

A Pledge for Gavi Means a Healthier Future for Children Everywhere 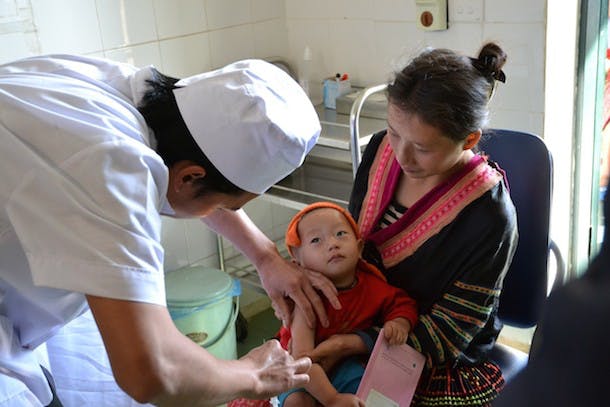 We are less than 24 hours away from the pledging conference in Berlin that we hope will set the course for Gavi, The Vaccine Alliance, to save the lives of 5 million to 6 million children in the coming years.

Over the weekend, the United States announced that it will commit $1 billion through 2018, a tremendous boost that brings Gavi closer to its goal. Including pledges already made by the European Union, Norway, Canada, and the United Kingdom, the expected resources total nearly $4 billion heading into the replenishment conference, but there is still plenty of room for other donors and countries to step up to the plate to give children in the poorest countries a shot at a healthy future.

The value of Gavi has been stated and restated in the past several weeks, and we have hear from many well-respected voices about the incredible impact that Gavi has had around the world. Newly released numbers show that, since its founding in 2000, Gavi and its partners have reached half a billion children with lifesaving vaccines and 7 million deaths have been prevented through Gavi-supported immunization programs. Gavi’s success is largely the function of a model that emphasizes smart partnerships and co-financing from recipient countries.

This month, a group of international journalists that the United Nations Foundation sponsored to visit the country of Viet Nam saw this impact firsthand. Since 2002, Gavi support for Viet Nam has totaled nearly $150 million, and this support has helped Viet Nam achieve some of the most impressive progress in the world on Millennium Development Goal 4 – reduce childhood mortality. In fact, Viet Nam received an award for having the highest average annual rate of reduction of child mortality among all Gavi countries since 1990.

The journalists had a chance to visit a remote health clinic in Dien Bien, a poor province located in the mountainous northern part of the country. In a clean, bustling health facility, they watched health workers administer vaccines to babies from the Hmong ethnic group as part of routine immunization. Despite the poverty and remote location, these children were being protected against a range of potentially deadly diseases.

Stories like those the journalists heard and saw in Viet Nam reinforce what the statistics tell us: Gavi’s work in developing countries protects children from disease and saves lives. The UN Foundation’s Shot@Life campaign has worked to share this important message, using its powerful network of grassroots advocates to educate legislators and garner Congressional support for a significant U.S. pledge. Through college campus activations, Shot@Life raised $10,000 for Gavi and, in partnership with the Bill & Melinda Gates Foundation, brought in $400,000 for Gavi as part of its holiday appeal.

In the final hours before pledges are officially made, governments and other donors have the opportunity to commit themselves and their resources to a cause that will help children live longer, healthier lives and will assist countries in building stronger health systems. An investment in Gavi is an investment in the future of countries like Viet Nam, and we know that these resources can bring to pass incredible returns – both economic, but more importantly those upon which we could never place a price.