9 People at the UN General Assembly Who Inspired Us

9 People at the UN General Assembly Who Inspired Us 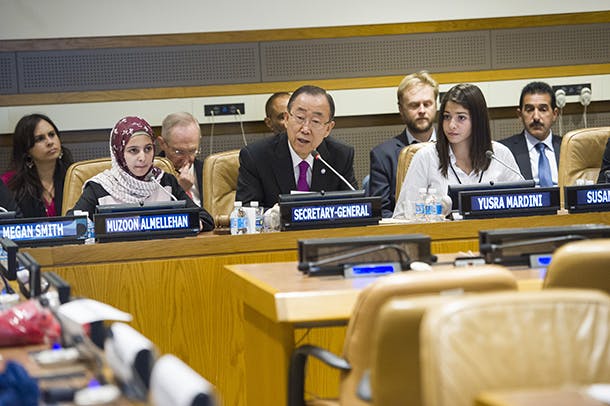 When people think of the United Nations General Assembly, they often picture heads of state speaking from the podium in the General Assembly hall. Yet the most inspiring people are often the ordinary citizens who have shown extraordinary courage in speaking out for human rights, justice, and equality.

At the opening of the 71st session of the General Assembly, the UN made sure we did not just speak about people around the world, but with them. By opening the doors of the UN to a range of voices and leaders, this year’s General Assembly delivered a powerful reminder of our common humanity and our shared promise to make sure global progress leaves no one behind.

Here are nine people who inspired us last week. 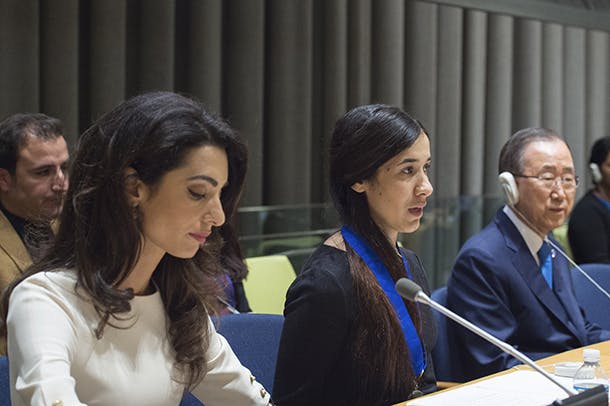 On September 16, Nadia Murad Basee Taha, a Yazidi woman who survived trafficking and brutal violence by ISIL, became a Goodwill Ambassador for the UN Office on Drugs and Crime (UNODC), where she will continue to raise awareness of the millions of people suffering human trafficking. She addressed the UN Summit for Refugees and Migrants on September 19, saying:

“The world has only one border; it is called humanity. The differences between us are small compared to our shared humanity. From this stage, I beg you all to put humans first and that you all support peace.”

Read her full remarks at the UN Summit for Refugees and Migrants.

Alex, 6-Year-Old Who Reminded Us of Our Common Humanity

Although 6-year-old Alex from Scarsdale, New York was not physically present at the General Assembly, his message of humanity was felt. At the Leaders’ Summit on Refugees on September 20, U.S. President Barack Obama read a letter he received from Alex, who offered to take 5-year-old Omran Daqneesh from Aleppo into his home and family. Here is an excerpt from his letter:

“Dear President Obama, remember the boy who was picked up by the ambulance in Syria? Can you please go get him and bring him to our home? … We will give him a family, and he will be our brother.”

Emi Mahmoud is an award-winning spoken word poet. Her family fled violence in Darfur, eventually settling in the United States in 1998. On September 18, she powerfully spoke at an event to launch a report on financing education globally, sharing the experience of having to flee home because of discrimination and violence.

“For three months they closed the schools down because people like us are an eyesore, so the first month we took it. The second, we waited. And a third month we met underneath the date palm trees drinking on every second our teachers gave us, turning fruit pits into fractions.” 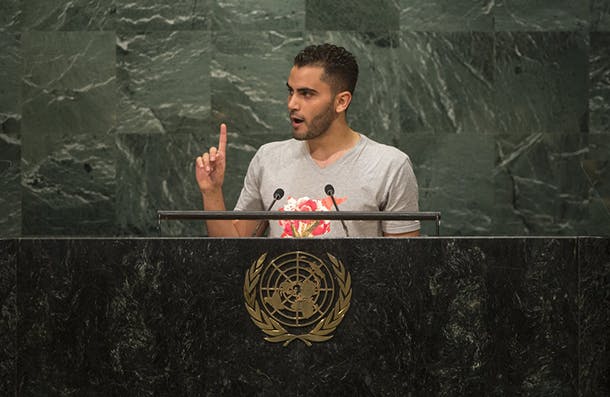 A Syrian refugee in the Netherlands, Mohammed Badran is a co-founder of Syrian Volunteers in the Netherlands, a non-governmental organization with a network of more than 600 volunteers who give back to the community. On September 19, he raised his voice for refugee youth, speaking at the UN Summit for Migrants and Refugees.

“We, young refugees, have dedicated our youthful energy to help in our communities, in our news homes, and in the ones we have left behind. … In our small way, refugees are already taking action; we want world leaders to do the same.”

Read his full remarks at the UN Summit for Refugees and Migrants. 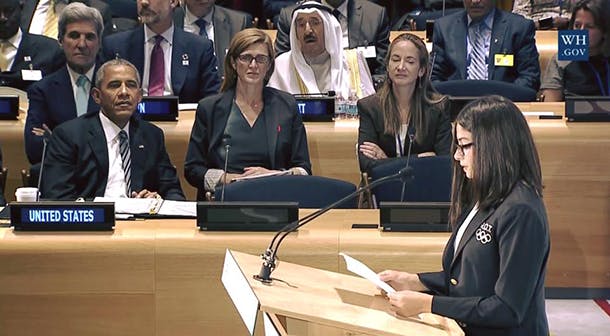 Last year, as Yusra Mardini and her family fled the violence in Syria, the boat they shared with dozens of other passengers started to take on water off the Turkish coast. So the teenager – a top-tier swimmer – jumped into the water and started to push. Thanks to that harrowing swim, the boat made it safely to Greece. Those same skills took Mardini to the Summer Olympics in August, where she competed as part of the first-ever Refugee Olympic Team. In September, she came to the UN General Assembly to raise her voice for refugees, including at the September 20 Leaders’ Summit on Refugees where she said:

“For me, I want to help change people’s perception of what a refugee is, for everyone to understand it is not a choice to flee from your home and that refugees are normal people that can achieve great things if given the opportunity.”

Hear from Yusra Mardini at the Social Good Summit. 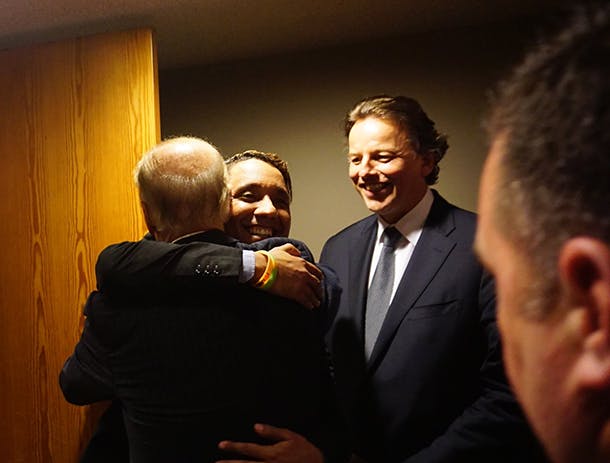 Caleb Orozco has courageously fought antigay laws in Belize, often facing threats and harassment. He heads the United Belize Advocacy Movement and has challenged Belize’s discriminatory law in court – a fight he recently won. He addressed a meeting of the LGBT Core Group at the UN General Assembly, saying:

“The best thing I see across the region today is that we’re building an LGBT movement. We’re not waiting, we’re leading and insisting on a better quality of life for ourselves. … The system of support matters for us, like the event here today, to pave the path to greater equality in Belize and around the world. Today, my family is my greatest defender; one day soon, I know it will be my government.”

Watch the #Path2Equality event, including remarks by Caleb Orozco, at the UN General Assembly. 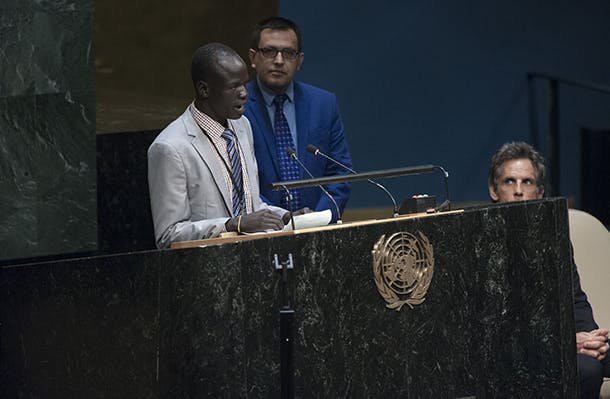 As a child, Yiech Pur Biel fled civil war in South Sudan and traveled hundreds of miles to the Kakuma Refugee Camp in northern Kenya, one of the largest refugee settlements in the world. Playing sports there helped him rediscover a sense of belonging – and, as an adult, recognize his raw talent as a middle-distance runner, even without shoes. This summer, he competed in the Olympics as part of the first-ever Refugee Olympic Team. On September 16, Biel spoke at the UN saying:

“I believe all refugees deserve the right to protection and to live in safety.”

Hear from Yiech Pur Biel at the Social Good Summit. 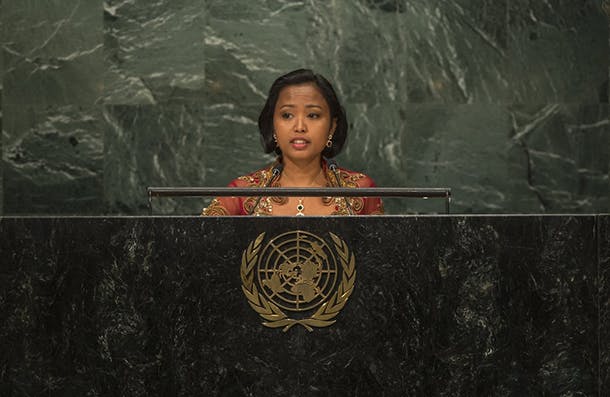 Eni Lestari Andayani Adi heads the International Migrant’s Alliance, an alliance of more than 120 grassroots organizations for migrants. Originally from Indonesia, she left to work abroad as a migrant domestic worker to help pay for food and education for her family. At the September 19 UN Summit for Refugees and Migrants, she spoke powerfully about the vulnerability of many migrants.

“Do we wish to be vulnerable? No. We wish to be seen and heard; not marginalized and excluded. We wish respect to our humanity…. I speak before you today with a clear message: Do not talk about us without us.”

Read her full remarks at the UN Summit for Refugees and Migrants. 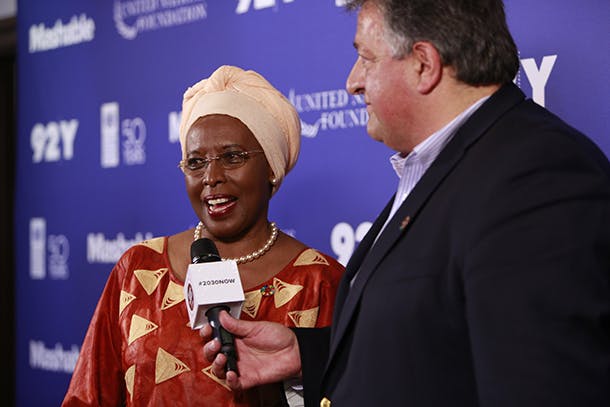 The first-ever laureate of the Aurora Prize for Awakening Humanity, Marguerite Barankitse has helped care for tens of thousands of orphans and refugees impacted by conflict in Burundi through her organization Maison Shalom and the REMA Hospital, which she opened. She addressed the Social Good Summit with her vision for the future.

“I want to give hope. I want to create a new generation who can break the cycle of violence. My wish for 2030 is that we become one true family – one human family.”

Read more about her panel at the Social Good Summit.