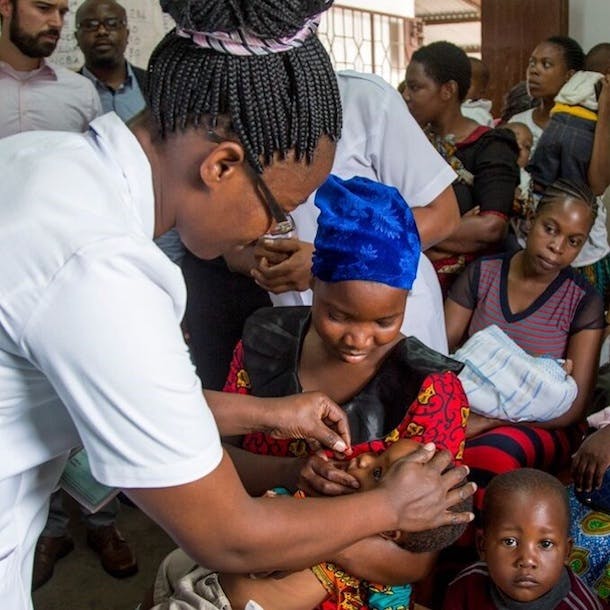 2017 was an eventful year for global health. This year saw historic progress in the fight to end infectious diseases, bolstered by fresh leadership of global health organizations. It also saw challenges that will require fierce commitment and innovative solutions. Through partnership beyond borders and a focus on fulfilling the promise of the Sustainable Development Goals of healthy lives for all, continued progress can be made in 2018 and beyond. Here are eight key global health stories from 2017.

Data released this year showed that 2016 was first time that fewer than 100,000 people worldwide died from measles, a highly contagious disease that mostly affects children under 5. Between 2000 and 2016, global measles deaths decreased a staggering 84%. In Europe, measles transmission has stopped in 42 out of 53 countries.

This encouraging achievement is attributed to the 5.5 billion doses of measles-containing vaccines given to children globally since 2000, saving 20.4 million lives. By 2020, the measles vaccine is set to save more lives than all other vaccines combined. But, there is still much work to be done to make sure that every child in every corner of the world receives two doses of the measles vaccine.

WHO Elects its First Director-General from the WHO African Region

In May, the World Health Assembly elected  Dr. Tedros Adhanom Ghebreyesus as Director-General of the World Health Organization (WHO). Dr. Tedros was Ethiopia’s Minister of Health and Minister of Foreign Affairs, where he improved access to health care for millions of Ethiopians and led negotiations for the Addis Ababa Action Agenda, in which 193 countries committed to finance the Sustainable Development Goals (SDGs). Dr. Tedros outlined five priorities for a new WHO: universal health coverage; health emergencies; women’s, children’s, and adolescents’ health; health impacts of climate and environmental change; and transforming WHO to be more efficient and effective.

The World Gets Closer to Ending Polio for Good

This year saw the fewest wild polio virus cases in history, a 50% decrease from 2016. There were only 17 cases of wild polio virus in just two countries, Afghanistan and Pakistan. In Nigeria, where polio is still endemic, there were no confirmed polio cases, but ongoing conflict prevents vaccinators from reaching over 200,000 children.

With the end of polio within reach, partners of the Global Polio Eradication Initiative (GPEI) are looking at how to support country efforts to transition GPEI-funded assets that have helped support broader health infrastructure. For instance, in Borno State, Nigeria, children were vaccinated for polio and given malaria medicine at the same time, protecting 1.2 million children under 5 from both diseases.

In October, the Global Fund to Fight AIDS, Tuberculosis and Malaria selected a new Executive Director, Peter Sands, a former head of Standard Chartered Bank and research fellow in business and global health at Harvard University. Sands is taking over a public-private partnership that has cut deaths from AIDS, TB, and malaria by one-third in countries where it invests since its founding in 2002.

The United States has historically been a global health leader, but earlier this year, the U.S. Administration expanded the “Global Gag Rule” – a policy which blocks U.S. funding to international programs that provide or mention abortion. The unprecedented expansion reaches beyond the $600 million the U.S. invests in international family planning programs and stifles nearly $9 billion in global health support for a range of health care services – including nutrition, tuberculosis, and AIDS – putting the people that depend on them at risk. Yet amid this challenging political climate, the U.S. Congress has shown strong bipartisan support for funding U.S. foreign aid.

The United States reaffirmed its commitment to stopping infectious disease around the world, extending support to the Global Health Security Agenda (GHSA) through 2024. The GHSA, launched in 2014, is a partnership of almost a third of the world’s nations working together with international organizations to strengthen global capacity to prevent, detect, and respond to infectious diseases before they potentially spread around the globe.

The GHSA leaders meeting this year agreed to speed up implementation of WHO’sInternational Health Regulations to keep the world safe from dangerous diseases, such as Zika, yellow fever, and Ebola. This year there was an Ebola outbreak in the in the Democratic Republic of Congo and in Uganda an outbreak of Marburg virus disease, an often fatal illness. Together, health ministries, WHO, and local partners stopped the outbreaks before they spread.

Health was a key part of the agenda at the G7 Summit in Italy this May. The G7 committed to pursuing policies that advance physical and mental health improvements across the globe. They recommitted to promoting women’s and adolescents’ health and acknowledged the effect of environmental factors on human health.

In July, Dr. Tedros led the WHO delegation participating in the G20 Summit in Germany, the first such summit to include a comprehensive discussion on global health. In his speech he urged the G20 to: triple by 2020 the annual investment into the effects of climate change on human health; invest sustainably in the Global Financing Facility to become the generation that ends deaths from preventable diseases; and support the development of new antibiotics to fight antimicrobial resistance (AMR).

Across the globe, governments, corporations, and nonprofits are recognizing the urgent need for action to tackle AMR. Misuse and overuse of lifesaving antibiotics has accelerated the rise of drug-resistant infections – so-called superbugs – jeopardizing global health by making common infections potentially deadly. AMR kills 700,000 people each year and has the potential to kill up to 10 million people each year by 2050 if we don’t get in front of the problem.

The United Nations established an Interagency Coordination Group on AMR in March to promote collaboration against superbugs. In May, at the G20 Summit, countries agreed to establish national action plans to slow superbugs’ rise, while supporting research and development of new antibiotics. At least 85% of WHO member states have developed a plan to tackle the AMR problem, with focuses on human, environmental, and animal health. And this fall, the UN Foundation co-hosted a global Call to Action meeting on AMR, uniting influencers across sectors to stop the spread of AMR and commit to concrete action.