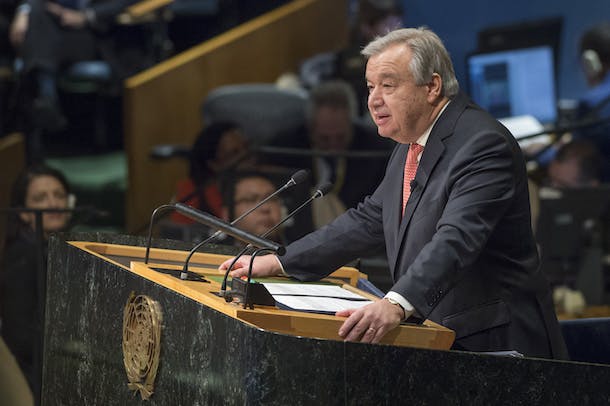 António Guterres, the former head of the UN Refugee Agency and former Prime Minister of Portugal, will take office as the next United Nations Secretary-General on January 1, 2017. At a swearing-in ceremony in mid-December, he addressed the UN General Assembly, highlighting important priorities for the UN, including peace, sustainable development, and management reform.

Here are eight quotes from his December 12 speech to the General Assembly:

· “In the end, it comes down to values, as was said so many times today. We want the world our children inherit to be defined by the values enshrined in the UN Charter: peace, justice, respect, human rights, tolerance, and solidarity. All major religions embrace these principles, and we strive to reflect them in our daily lives. But the threats to these values are most often based on fear. Our duty to the peoples we serve is to work together to move from fear of each other, to trust in each other. Trust in the values that bind us, and trust in the institutions that serve and protect us.”

· “We live in a complex world. The United Nations cannot succeed alone. Partnership must continue to be at the heart of our strategy. We should have the humility to acknowledge the essential role of other actors, while maintaining full awareness of our unique convening power.”
· “It is time to reconstruct relations between people and leaders – national and international. Time for leaders to listen and show that they care, about their own people and about the global stability and solidarity on which we all depend. And it is time for the United Nations to do the same: to recognize its shortcomings, and to reform the way it works. This Organization is the cornerstone of multilateralism, and has contributed to decades of relative peace. But the challenges are now surpassing our ability to respond. The UN must be ready to change.”

· “Our most serious shortcoming – and here I refer to the entire international community – is our inability to prevent crises. The United Nations was born from war. Today we must be here for peace.”

· “The United Nations needs to be nimble, efficient, and effective. It must focus more on delivery and less on process; more on people and less on bureaucracy.”

· “I pledge to respect gender parity from the start in all my appointments to the Senior Management Group and the Chief Executives Board. By the end of my mandate, we should reach full gender parity at the Undersecretary-General and Assistant Secretary-General levels, including special representatives and special envoys.”

· “I am deeply honoured by the trust and confidence Member States have placed in me, and determined to be guided by the purposes and principles of the Charter.”