People in the United States may seem divided, but when it comes to protecting the planet, 25 governors have joined forces to support the Paris Agreement on climate change.

Two years ago on June 1, 2017, when the Trump administration announced its intention to withdraw from the Paris Agreement, the governors of California, Washington, and New York stepped up to support the international agreement. Since then, the U.S. Climate Alliance has grown to represent 24 states and Puerto Rico. And it continues to gain members. 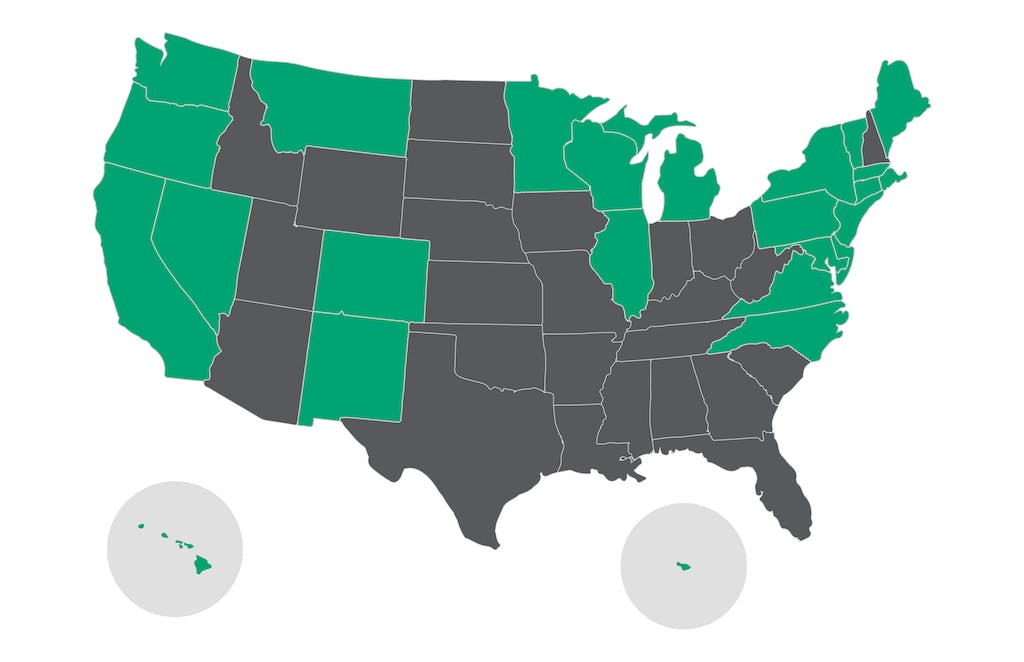 Despite representing a wide variety of people, places, and economies, governors in the alliance are united by the same mission: to show that states can lead on climate action while growing clean energy economies, improving public health, and building more resilient communities.

Currently, the U.S. Climate Alliance represents 55% of the U.S. population, 40% of U.S. greenhouse gas emissions, and an $11.7 trillion economy. If the alliance were a country, it would be the third largest economy behind the U.S. and China.

These states know that leadership on climate change can’t wait — and over the past two years they’ve been making it happen.

Here are 7 key actions on climate change that states in the U.S. Climate Alliance have taken:

1. Established ambitious goals to reduce greenhouse gas emissions. All states that join the Alliance agree to implement policies that advance the goals of the Paris Agreement — at least a 26-28% reduction in greenhouse gas emissions below 2005 levels by 2025 — but many are pushing reductions even further. California, for example, set a statewide target to reach carbon neutrality by 2045. New Mexico established a statewide goal of reducing GHG emissions by 45% below 2005 levels by 2030.

2. Signed legislation that ramps up renewable energy. Clean energy is essential to reducing pollution and creating jobs — and states in the alliance are accelerating the green economy. Nevada passed a bill to increase the amount of electricity it gets from renewable sources to 50% by 2030. And in Minnesota, Governor Tim Walz and Lieutenant Governor Peggy Flanagan announced a new set of policy proposals that will lead Minnesota to 100% clean energy in the state’s electricity sector by 2050.

3. Pushed for better energy efficiency. Homes and commercial buildings account for 40% of total energy use in the U.S., which makes energy efficiency a crucial part of any state’s plan to mitigate climate change. In Washington, Governor Jay Inslee signed legislation that establishes a first-of-its-kind standard that will improve the energy performance of thousands of large commercial buildings across the state.

4. Accelerated policies for Zero Emission Vehicles. Alliance states lead the nation in reducing passenger vehicle emissions, the largest source of emissions in the transportation sector. In May 2019, Colorado’s Air Quality Control Commission unanimously voted to initiate a decision that would require auto manufacturers to make electric vehicles 5% of their vehicles for sale in Colorado by 2023. Hawaii’s legislature passed a bill that provides rebates to people who install a new electric vehicle charging system or upgrade an existing systems.

5. Proposed regulations to cut harmful air pollutants. Although pollution from carbon dioxide receives the most attention, short-lived climate pollutants, such as black carbon, methane, and hydrofluorocarbons (HFCs), also pose key challenges to climate and health. In 2019, Virginia announced plans to limit methane leaks from natural gas infrastructure and landfills. Connecticut, Maryland, and New York plan to propose regulations in 2019 that will prohibit the use of harmful HFCs and backstop federal rollbacks; and Washington and Vermont recently passed similar legislation.

6. Created new financing opportunities for clean energy and resilient communities. In Massachusetts, Governor Charlie Baker signed bipartisan legislation to authorize over $2.4 billion in investments for safeguarding residents, municipalities, and businesses from the impacts of climate change, as well as protecting environmental resources and improving recreational opportunities. And Colorado launched a new “Green Bank” that will leverage money from the private sector to spur investment in clean-energy projects.

The actions showcased above only capture a fraction of the climate action happening at the state level. On top of that, across the U.S., local action at the city and county level continues to drive progress on climate change forward. Ultimately, meeting the global climate challenge requires everyone, everywhere — and at every level —  to step up action. As United Nations Secretary-General António Guterres has said, “Climate change is a race we can win, but we must step up ambition now.”

To learn more about the U.S. Climate Alliance and how states are acting on climate change, visit usclimatealliance.org

Key Findings to Know from the IPBES Report on Biodiversity