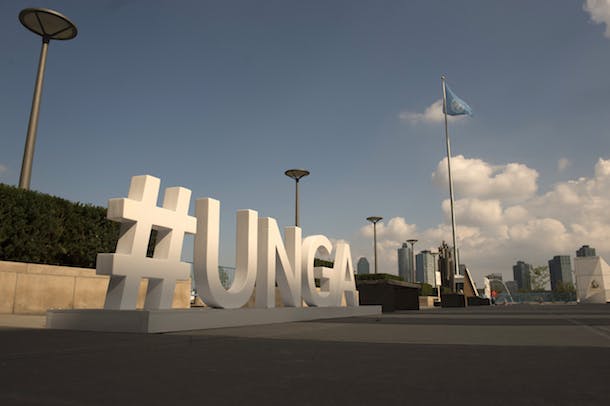 Last week was a busy one at the United Nations in New York: the General Assembly kicked off its 72nd session, the first one for both UN Secretary-General António Guterres and U.S. President Donald Trump. While the speeches from world leaders generally get most of the attention, we want to draw your attention to a few events from the week that you may have missed.

Provided below is seven of the top events:

1. High-Level Event on UN Reform
On September 18, President Trump chaired a meeting on UN reform co-hosted by the U.S. In his remarks, the U.S. pledged that the U.S. would support the Secretary-General’s reform agenda. A copy of the declaration can be found here.

2. High-Level Meeting on Sexual Exploitation and Abuse
The purpose of this meeting, also held on Sept. 18, was to highlight the steps made to stamp out sexual exploitation and abuse in the UN and to introduce Jane Connors, the newly appointed Victims’ Rights Advocate. Her role will be to elevate the voice of victims and the need to fund the Victims’ Trust Fund.

3. End Forced Labor, Modern Slavery and Human Trafficking
On September 19, the U.S. joined with the United Kingdom and 36 other countries to sign a Call to Action to End Forced Labor, Modern Slavery, and Human Trafficking. The Call to Action was important as it was paired with a U.S. financial commitment of $25 million to the new Global Fund to End Modern Slavery. This push to end modern slavery by 2030 builds upon legislation championed by U.S. Senator Bob Corker and U.S. Senator Bob Menendez that was passed late last year. Additionally, the UN held a high-level meeting on September 27-28 to discuss progress and challenges toward ending human trafficking.

4. Security Council Meeting on Peacekeeping Reform
On September 20, the Security Council convened an open debate on peacekeeping reform. Speaking on behalf of the U.S., Vice President Mike Pence noted that the U.S. supports efforts to make peacekeeping missions more efficient and effective, and reiterated the principles espoused by U.S. Ambassador to the UN Nikki Haley for evaluating peacekeeping operations: Namely that they must support a political process, enjoy host government support, possess realistic mandates, and have a clear exit strategy.

5. Gates Foundation Goalkeepers Event
At this inaugural event, on September. 20, former U.S. President Barack Obama gave the keynote address and spoke about the value of multilateralism, saying that nations need to find places where they can agree, like they did for the Sustainable Development Goals (SDGs), adopted by the UN General Assembly in 2015. This event complements a Gates report recently released that monitors and assesses key points of progress toward the SDGs. The Gates Foundation has committed to releasing such a report every year until 2030.

6. High-Level Event on Famine Response and Prevention
On September 21, Secretary-General Guterres noted that nearly 60% of the $4.9 billion required to cover urgent humanitarian operations has been received. He concluded, however, by pointing out that in each of the four countries threatened by looming famine, conditions have worsened since February, remarking that, “We must do better, and we have no time to lose.” At this event, USAID Administrator Mark Green announced more than $575 million in additional humanitarian assistance to the millions of people affected by food insecurity and violence in Yemen, South Sudan, Nigeria, and Somalia.

7. Accelerating Malaria Elimination
On September 21, USAID Administrator Mark Green announced the expansion of the President’s Malaria Initiative countries, which will allow U.S. malaria programs to reach over half a billion people in sub-Saharan Africa.