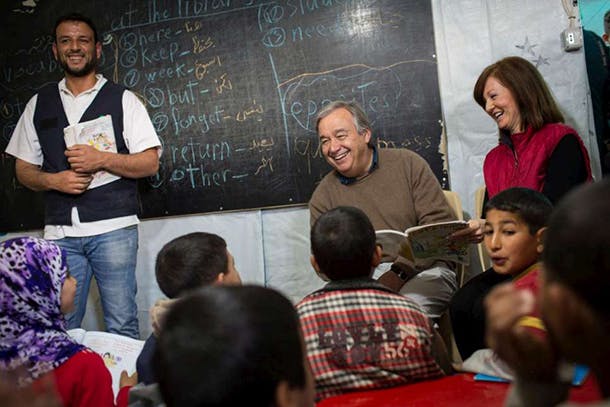 On Thursday, October 6, the United Nations Security Council nominated António Guterres to serve as the next Secretary-General to succeed current Secretary-General Ban Ki-moon starting on January 1, 2017. The UN General Assembly will next need to approve the recommendation.

Guterres has deep experience as a leader, a diplomat, and a humanitarian. He served as the head of the UN Refugee Agency from 2005-2015 and is the former Prime Minister of Portugal, which means he will be the first Secretary-General to start the job with experience as a head of government.

As UN Foundation Founder and Chairman Ted Turner said, “He understands what it takes to lead, and he knows how to get things done. He’s an impatient humanitarian who will be a tireless diplomat for the hopes of people everywhere.”

To learn more about Guterres, read seven of his quotes below:

“In times of insecurity, when people feel uncertain about their future, when anxieties and fears are promoted and exploited by political populists, old-fashioned nationalists or religious fundamentalists, the success of the UN and the international community lies in our common commitment to our common values.” – Vision Statement submitted on April 4, 2016

“We need a surge in diplomacy for peace. The international community spends much more time and resources managing crises than preventing them. But TV cameras are seldom there when a conflict is avoided, so it is difficult for governments and international organizations to make prevention a priority. I believe prevention must be not only a priority, but the priority of everything we do. That means we need a huge cultural change to affirm the centrality of prevention.” – July 20, 2016 interview with TIME

“The UN is uniquely placed to connect the dots to overcome these challenges. To succeed, it must further strengthen the nexus between peace and security, sustainable development and human rights policies – a holistic approach to the mutually-reinforcing linkages between its three pillars. The 2015 landmark agreements on sustainable development, notably the Agenda 2030, the Paris Climate Agreement and the Addis Ababa Action Agenda layout a clear strategy for action. They represent a unique opportunity that must be seized. Achieving these important goals has direct implications for peace and the realization of human needs and fundamental rights. For many it means survival.” – Vision Statement submitted on April 4, 2016

“The SG must stand firmly for the reputation of the UN and its dedicated staff. Leading by example and imposing the highest ethical standards on everyone serving under the UN flag. In particular, elevating the prestige of the blue helmet, the soldier standing for peace, and eradicating, once and for all, the exploitative and abusive conduct of those UN agents who do not represent what the Organization stands for.” – Vision Statement submitted on April 4, 2016

“The ability to be an advocate for our true universal values is essential in the Secretary-General’s job to strengthen the UN and ensure its centrality and peoples’ trust.” – July 20, 2016 interview with TIME

“The moment has come for a radical change in international efforts to address displacement. As humanitarians, we are supposed to be the first responders – but we are at breaking point. There is no way we can go on treating the symptoms while talking about curing the disease as if that were possible only in an ideal world. We must stop just dealing with the consequences of displacement, and seriously start tackling its root causes.” – Remarks as UN High Commissioner for Refugees, December 16, 2015

“I have two words to describe what I’m feeling now: gratitude and humility. Humility (is what I feel) about the huge challenges ahead of us, the terrible complexity of the modern world. But it is also humility that is required to serve the most vulnerable, victims of conflicts, of terrorism, rights violations, poverty, and injustices of this world.” – Statement following the Security Council nomination