How are we doing on reaching the Sustainable Development Goals (SDGs) and their promise of a fair future for people and the planet?

The short answer: The results are mixed. The longer answer: According to the SDG progress report for 2019, we’re making progress in some areas, but not fast enough. And worse, we’re facing big threats – like climate change, conflict, and inequality – that threaten that progress. But this assessment is not a reason to give up hope; in fact, it’s a reason to step up our actions.

Time and time again, we’ve seen that progress is possible when we act as an international community.  When governments, businesses, and citizens work together and put resources and determination behind a goal, change happens: Families move out of poverty, children are protected from diseases, girls become students, instead of brides, and much more.

That’s why, in 2015, world leaders came together at the United Nations and agreed to a plan to end extreme poverty, tackle inequality, and protect the planet. As we head into 2020, now is the time for governments to step up and act bigger and bolder to achieve the SDGs so no one is left behind. We’ve got technologies and solutions; we’ve got resources; what we need is political will from our leaders.

As world leaders meet at the UN in July and again in September to assess how we’re doing on the SDGs, here are six reasons to keep pushing to achieve the promise of the SDGs of a fair future for people and planet.

1. More children are surviving: Child deaths declined by nearly 50% from 2000-2017. The world mobilized to get more vaccines and health services to millions of children who previously weren’t protected from preventable diseases. Thanks to these efforts, child deaths have significantly dropped from 9.8 million deaths to 5.4 million in 2015. We can’t stop until we reach every child with basic services and needs, including nutrition, health care, clean water, and education.

2. We can end poverty. In fact, extreme poverty has dropped to just 10% of the world’s population. Extreme poverty declined from nearly 36% of humankind to just 10% between 1990-2015. We need to step up action though because progress is slowing and still more than 700 million live on less than $1.90 — a statistic that shouldn’t exist in a world with so much wealth.

3. Hunger is on the rise. Children are going to bed without the food they need. And that is not ok. The data on global hunger is troubling for two reasons: 1) Because approximately 1 in 9 people in the world aren’t getting the nourishment they need, and 2) because hunger is on the rise for the third year in a row after a period of major decline thanks to the impacts of climate change and conflict. Now is the time to turn things around: We have enough food to feed the world; we need to address the barriers that prevent people from getting it.

4. Nearly 9 in 10 people now have access to electricity to power their futures. Let’s finish the job. Most people in the world now have access to power in order to study at night, cook food, and run their businesses. While we’re making progress, we need to accelerate action to reach the 840 million people without access to electricity and the close to 3 billion people who still cook with inefficient, polluting, and often unsafe systems.

5. Climate change is running faster than we are. But it’s still a race we can win, as UN Secretary-General António Guterres says. Greenhouse gas emissions reached a record high in 2017 and are now 146% higher than pre-industrial levels. Climate change is having devastating impacts and threatens to roll back the gains we’ve made on poverty, health, and more. Now is the time to step up urgency and ambition to act on climate, which is why the Secretary-General is organizing a climate summit in September for world leaders to come with plans, instead of talk.

6. Everyone, everywhere deserves equal rights. But right now, no country is on track to achieve gender equality by 2030. Let’s change that. We can’t accept a status quo that denies girls and women equal rights. As the SDG report notes, girls and women continue to face high levels of violence, spend more time on unpaid care work, and are underrepresented in leadership positions. Each of us can advocate for changes to policies and social norms that discriminate against women, so we can be the generation to achieve equality.

Why else should we act on the SDGs? Because it’s more effective than doing nothing. It’s easy to be cynical and to believe nothing can be done to make the world better. But that’s not how change happens.

Change happens when we work together — across borders and backgrounds — for the shared cause of a fair, just future for people and planet.

Helpfully, the SDG Report for 2019 lays out areas we should focus on, including:

We can move from the world as it is to the world we want – but it won’t happen by accident, it will happen through action. Join us to act like the world depends on it. Because it does. 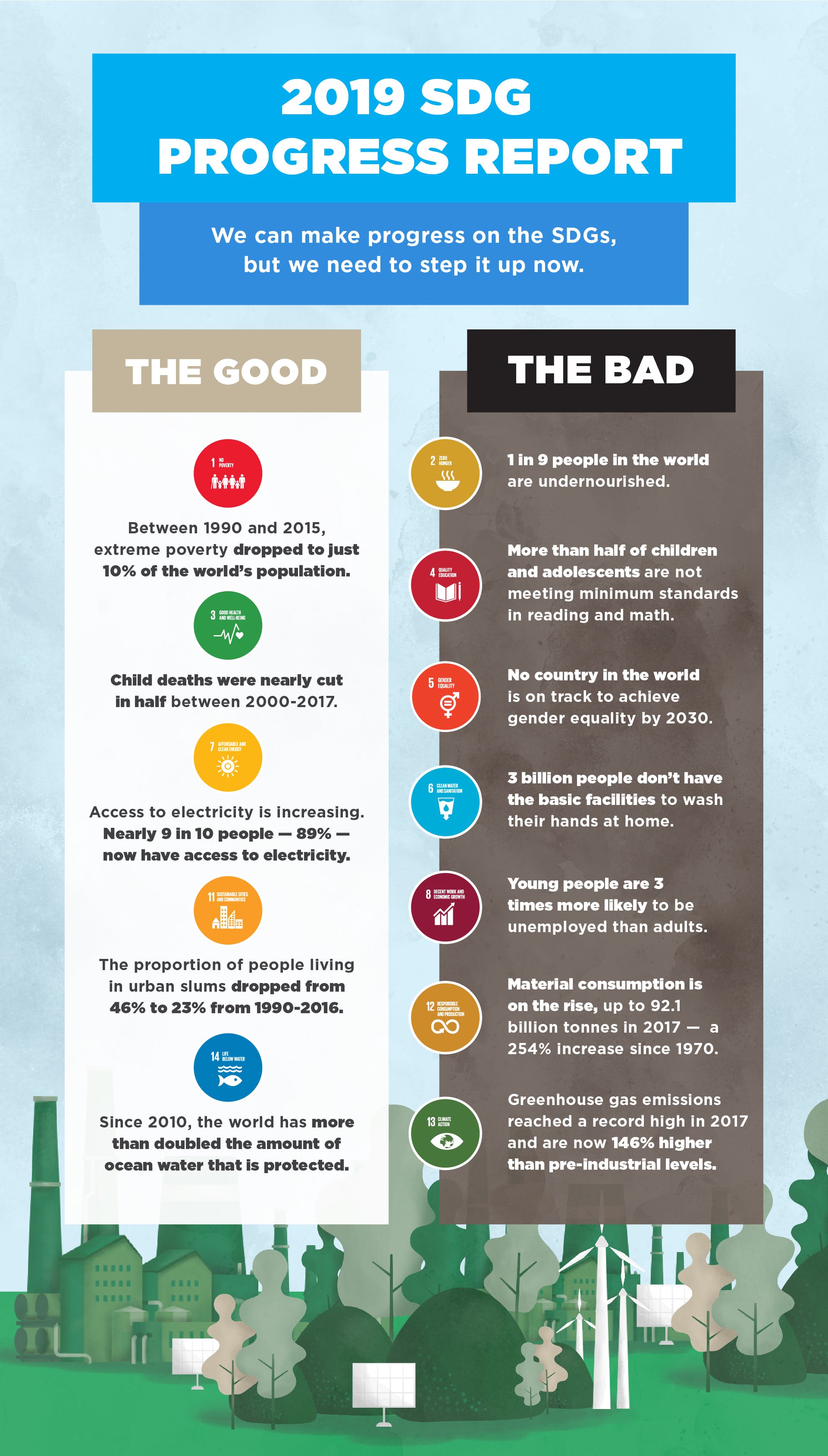 Common Questions on the Sustainable Development Goals: What Does “No One Left Behind” Mean?

The Change We Need to Make to Achieve a Sustainable Future: Thinking Beyond Issues and Sectors to People