6 Reasons to Care about Measles

6 Reasons to Care about Measles 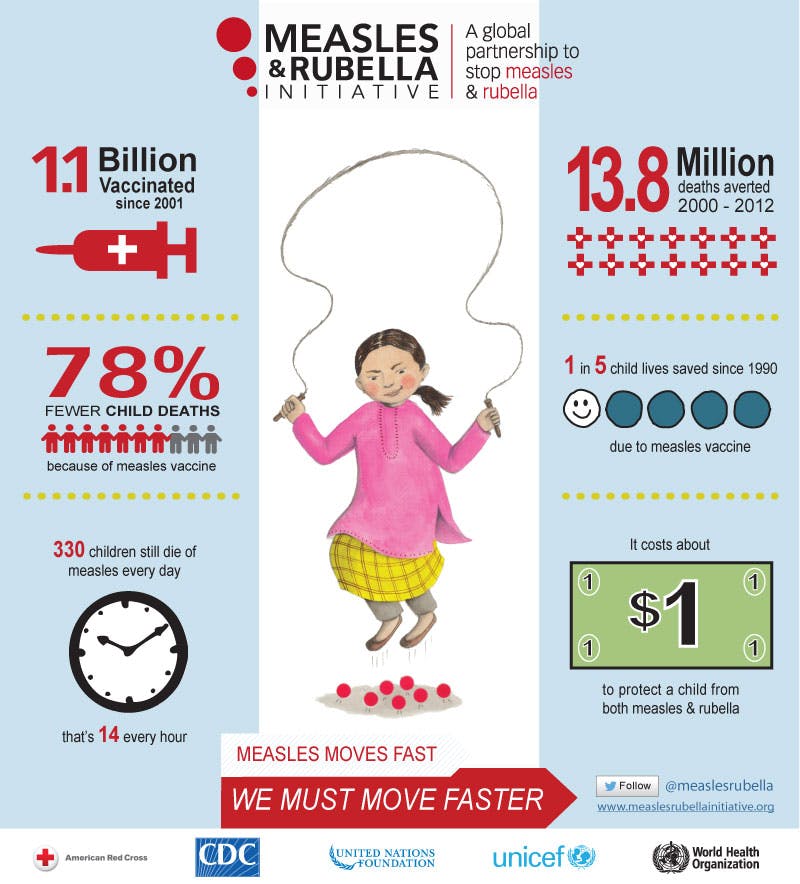 Last fall, we highlighted six reasons why you should care about measles. Eliminating measles remains as urgent as ever: Last year, nearly 30 countries had large outbreaks, and in 2014 we’ve already seen outbreaks from New York City to New Zealand, as well as among vulnerable populations like South Sudanese refugees.

But there is good news. Yesterday the Western Pacific Region of the World Health Organization certified Australia, Macao (a Special Administrative Region of China), Mongolia, and the Republic of Korea as measles-free. This is an important step towards achieving the goal of eliminating measles in the region and, eventually, the world.

To mark this achievement, here is an updated list of reasons why measles should matter to you.

1. About 330 people, mostly children, die of measles every day. In fact, measles is one of the top killers in the world of children under the age of 5. WHO calls measles “one of the most infectious diseases known to humankind.”

2. The World Health Organization recommends every child get two doses of the measles vaccine, but in 2012, an estimated 21.2 million infants didn’t even get a first dose. To reach children and stop measles in its track, it’s important for countries to incorporate the measles vaccine in their routine health services. While this is happening more and more, many of the world’s poorest children are being left behind – putting their lives at risk.

3. It only costs about $1 to vaccinate a child against measles. Vaccines are one of the most cost-effective solutions we have to protect children from deadly diseases.

4. 1.1 billion doses of the measles vaccine have been given to children since 2001. A global partnership called the Measles Initiative (now the Measles & Rubella Initiative) launched in 2001. Working with 80 countries, this partnership has helped vaccinate children and drive progress against measles. Thanks in large part to the initiative’s efforts, measles deaths have decreased by 78% worldwide since 2000. Global measles vaccination coverage remains steady at 84%.

5. An estimated 13.8 million deaths were prevented from 2000-2012 thanks to measles vaccination. In this decade, the Measles & Rubella Initiative expects the vaccine to prevent another 13.4 million deaths.

6. Until we end measles, we are all at risk. A highly infectious disease like measles doesn’t respect borders. We increasingly see measles cases crop up in countries that have been certified measles-free, imported from other countries where the disease persists. The world should be united in its commitment to end measles because, until we achieve that goal, we are all risk of getting the disease.

We have made progress in the fight against measles, but we have more work to do.