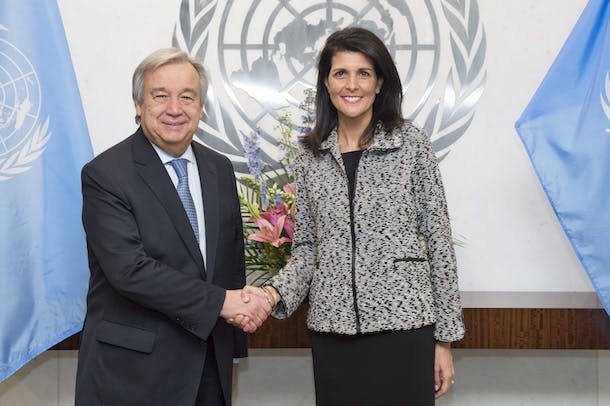 It’s going to be a blockbuster week on Capitol Hill for the U.S.-UN partnership with U.S. Ambassador to the UN Nikki Haley testifying before the House Foreign Affairs Committee and the House Appropriations Committee on the proposed funding levels for the UN in 2018 on July 27 and 28. This will be Ambassador Haley’s first public appearance on Capitol Hill since her confirmation hearing.

Over the past six months, Ambassador Haley has formed a close working relationship with UN Secretary-General António Guterres, and together, they are a determined force to advance UN reform. However, her important agenda could face an uphill climb should the U.S. fall short on paying its bills to the organization.

These unfortunate circumstances aren’t too far off from becoming a reality. As you may remember, the Administration’s budget request, which was submitted to Congress last month, called for deep cuts to a number of UN-related accounts, including UN Peacekeeping, UN Women, the UN Development Program (UNDP), the International Atomic Energy Agency (IAEA), and even the UN’s Children Fund (UNICEF).

As she correctly stated, the power of the purse does sit on Capitol Hill. Therefore, Haley’s testimony this week will be one of the most important deciding factors in the UN’s budget for the next year.

Below are five top questions we can expect Members of Congress to ask Ambassador Haley in the upcoming budget hearings: