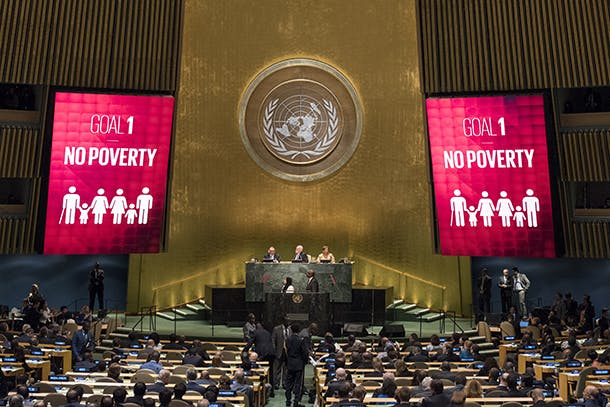 The high-level week of the 71st session of the United Nations General Assembly recently finished, bringing people – from heads of state to heads of companies and from leaders of nongovernmental organizations to grassroots advocates – to the UN to discuss the world’s biggest challenges, ranging from climate change to the crisis in Syria to inequality.

A year after the adoption of the Sustainable Development Goals, it’s clear that there is a lot of work to do, but the good news is that a number of events and conversations took place last week that will help make progress on the global promise embodied in the goals to leave no one behind.

Here are five highlights to know about:

A Big Step Forward on the Paris Agreement on Climate Change

During the UN General Assembly, the world took a big step closer to bringing the Paris Agreement on climate change into force this year – a key priority for UN Secretary-General Ban Ki-moon, who has shown tremendous leadership on this issue.

At a high-level event on September 22, the Secretary-General announced that the agreement had met one of two criteria to enter into force: More than 55 countries, representing 47.5% of greenhouse gas emissions, have officially joined it. Once the countries joining the agreement represent at least 55% of greenhouse gas emissions, it will enter into force. The Secretary-General said:

“What once seemed impossible is now inevitable.  I am confident that, by the time I leave office, the Paris Agreement will have entered into force. This will be a major achievement for multilateralism. … And it will catalyze action on many levels.”

Support for Refugees and Migrants

At a high-level Summit for Refugees and Migrants on September 19, the UN called for the international community to improve and expand its response to meet the needs of refugees and migrants.

At the summit, world leaders adopted the New York Declaration for Refugees and Migrants, “which expresses the political will of world leaders to protect the rights of refugees and migrants, to save lives, and to share responsibility for large movements on a global scale.” Importantly, the declaration also lays the groundwork for the adoption of global compacts on migration and refugees in 2018. Additionally, the UN launched a new “Together” campaign to fight xenophobia around the world.

At the summit, Nadia Murad Basee Taha, a Yazidi woman who survived trafficking and brutal violence by ISIL and is a Goodwill Ambassador for the UN Office on Drugs and Crime, said: “The world has only one border; it is called humanity. The differences between us are small compared to our shared humanity. From this stage, I beg you all to put humans first and that you all support peace.”

Following the UN summit, U.S. President Barack Obama, along with UN Secretary-General Ban Ki-moon and other leaders, co-hosted the Leaders’ Summit on Refugees on September 20 to encourage countries and companies to make concrete commitments to support refugees.

According to the White House, those making commitments “increased their total 2016 financial contributions to UN appeals and international humanitarian organizations by approximately $4.5 billion over 2015 levels; roughly doubled the number of refugees they resettled or afforded other legal channels of admission in 2016; created improved access to education for 1 million refugee children globally; and, improved access to lawful work for 1 million refugees globally.”

One year ago at the UN General Assembly, world leaders adopted the Sustainable Development Goals, a shared to-do list to end poverty, fight inequality, and tackle climate change. A year later, the hard work to implement the goals is well underway. Throughout the General Assembly, conversations focused on how the global community can accelerate progress to achieve the goals.

Highlights include the second annual “Solutions Summit,” which lifted up grassroots innovators who are already making progress on the goals and helped connect them to resources and key partners to help scale their solutions. Other discussions focused on how to catalyze financing for sustainable development and leverage the data revolution to make informed decisions on policy and resources, to track progress, and to find new answers to old problems.

Additionally, recognizing the important role of young people in achieving the global goals, on September 20, the UN announced its first class of “UN Young Leaders for the Sustainable Development Goals.” These 17 young leaders from around the world show that youth aren’t waiting until tomorrow to lead; they are taking charge today to create a better world.

The UN General Assembly helped raise the profile of key challenges on the global agenda to foster discussion of how we can advance much needed solutions.

This included a high-level meeting of the General Assembly on September 21 on antimicrobial resistance, the threat of infections that are resistant to antibiotics. This is only the fourth time in UN history that the General Assembly has taken up a health issue – a sign of the importance of moving urgently to address the challenge. At the meeting, “Countries reaffirmed their commitment to develop national action plans” to tackle antimicrobial resistance, based on the global action plan developed by the World Health Organization and other UN agencies.

“I am proud to call myself a feminist,” UN Secretary-General Ban Ki-moon declared at the General Assembly. The dialogue throughout the week went beyond WHY we must empower girls and women to HOW we can do so. Among the many solutions highlighted were the importance of closing gender data gaps and expanding economic opportunities.

At an event on September 21, Data2X joined UN Women, the Bill & Melinda Gates Foundation, and the Government of Australia for an event to launch UN Women’s “Making Every Woman and Girl Count” initiative to work with select countries “to generate, prioritize, and use gender data.”

On September 22, the Secretary-General’s High-Level Panel for Women’s Economic Empowerment released a report highlighting challenges facing women, such as carrying the burden of unpaid work, and making recommendations on how to remove barriers so more women have equal opportunities in the economy.

To learn more about the issues discussed at the UN General Assembly, visit our special section on the blog.